The 'Lose You to Love Me' singer's relationship with the Miami Heat player is allegedly 'very casual' and not serious yet, though she 'thinks he's a great guy.'

AceShowbiz - Selena Gomez is yet to take a plunge into a serious relationship. Despite being reported to have gone on "a few dates" with NBA star Jimmy Butler, the "Lose You to Love Me" songstress was not in a hurry to settle down with the Miami Heat player by keeping things between them "very casual."

Offering more details on the 28-year-old singer's romantic life was E! News. "They hung out a few times while Selena was in New York City. Jimmy asked her to go to dinner and they had a great time," the outlet quoted a source as saying. "It's very casual and she's open to seeing where things go, but isn't settling down just yet."

The former star of "Wizards of Waverly Place" was further said to be "keeping her options open but has been on a few dates with Jimmy and thinks he's a great guy." The so-called inside source added that she "is currently single but has recently been more open to dating," and her "friends want to set her up all the time."

Instead, Selena, who has been living with lupus, has been "very careful with her health this year." The source stated that she "has barely left her quarantine bubble. She's been extremely busy working from home on her new beauty line and is very proud to have launched that during a pandemic. She's been enjoying cooking at home and only seeing a select few friends and family members regularly."

Selena sparked dating rumors with Jimmy after the two were spotted enjoying dinner together at Lucien restaurant in New York City. Miami Herald reported that a social media user has shared texts screenshot that was said to have come from a private gossip Instagram page, Deux Moi. 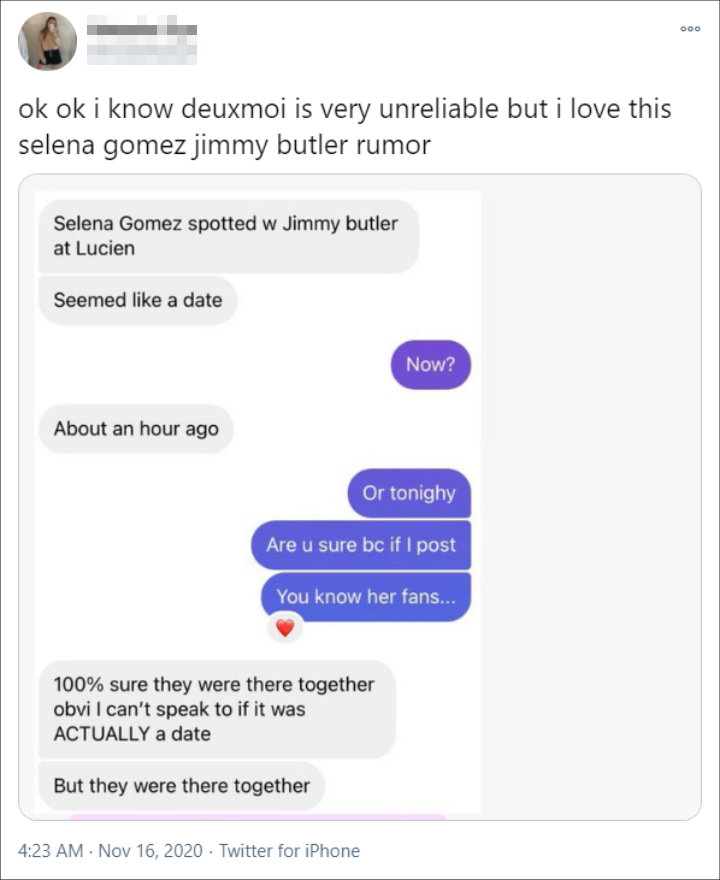 Selena Gomez was reported to have dinner with Jimmy Butler.

The dating rumors popped out two years after the "Wolves" hitmaker split from her on-and-off ex-boyfriend Justin Bieber. She was also romantically linked to fellow musician The Weeknd for nearly a year before they parted ways in 2017.