Noticing the opposite behavior from the 'Sorry Not Sorry' singer, naysayers immediately take to social media to put Demi on blast as one shares the popular 'how it started' vs. 'how it's going' meme about her.

AceShowbiz - Demi Lovato is one of the celebrities who took online to celebrate Thanksgiving. On Friday, November 27, the "Sober" hitmaker shared on her Instagram Story a picture of her prized roasted turkey, only to be criticized due to her previous visit to an animal sanctuary.

In the said post, Demi flaunted the holiday feast while writing in the caption, "I'm thankful for all of you." While it might look like a normal Thanksgiving post, people were quick to slam the singer for her sudden carnivore behavior after trying to appear like a conservationist last month. 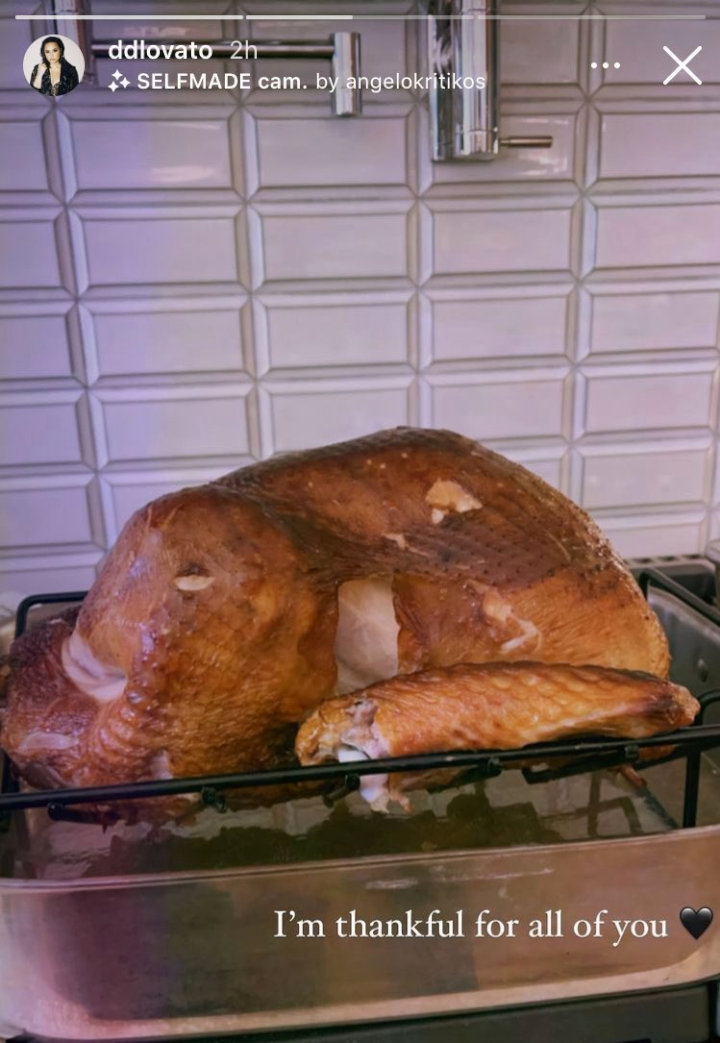 At the time, posting a slew of pictures of herself taken at Farm Sanctuary, the "Sorry Not Sorry" songstress shared compassion for animals, especially for a pet turkeu named Sandy. "I recently visited @farmsanctuary, which is the first animal rescue specifically for farm animals in the U.S. I spent the day with cows, goats, sheep, pigs, donkeys, and turkeys, who were all rescued from cruelty," so she wrote in the caption.

The 28-year-old star added, "The highlight of my tour was cuddling with a rescued turkey named Sandy. Not only are these animals cute, but they are forgiving. The animals at @farmsanctuary had to learn to trust humans after what they'd been through, and their strength and resilience is amazing! Check out adoptaturkey.org or @farmsanctuary's page for more information! #AdoptATurkey."

Noticing the opposite behavior, naysayers immediately took to social media to put Demi on blast. "TODAY IN CRINGE: Demi Lovato poses with turkey in photo promoting animal sanctuary that fights animal agriculture. Demi later makes turkey for Thanksgiving," one Twitter user wrote on Friday. Another fan also shared the popular "how it started" vs. "how it's going" meme comparing Demi's pictures involving turkeys.

"I'm not saying meat eaters can't adopt or rescue a turkey but to be in an ad for adopting turkeys then to post a cooked turkey in your story seems like a pointless oxymoron. Demi Lovato could've quietly adopted a turkey or quietly cooked one, she didn't need to post about BOTH," one other fan opined. Clowning Demi, one user tweeted, "Demi Lovato betray her turkey. Lol."

However, some others were defending Demi. "Y'all are cancelling Demi Lovato for eating a turkey on thanksgiving because she visited a farm and took a selfie with a turkey once???" a person asked in disbelief. "every single american eats turkey on thanksgiving but twitter decided to get mad at demi lovato for it, you truly can't make this s**t up lmao," another fan added. Seemingly thinking that the backlash was ridiculous, someone sarcastically wrote, "And now @ddlovato becoming the first artist ever who gets canceled bc she ate turkey at thanksgiving. Congrats queen."