The English supermodel uploads and then deletes a post of an article which headline reads, 'Here's Why Fans Are Starting To Think Tyra Banks Is The Real Mean Girl, Not Naomi Campbell.'

AceShowbiz - Naomi Campbell and Tyra Banks may no longer be actively modeling on catwalk, but the tension between the two is apparently still high. The English beauty has thrown her fellow supermodel under the bus by suggesting that the latter is "the real mean girl."

Having been battling the unflattering title for years, the 50-year-old is more than willing to hand over the crown to her nemesis as she shared an eyebrow-raising post on Tuesday, November 17 on her Instagram Stories. She uploaded a screenshot of an article from The Things titled "Here's Why Fans Are Starting To Think Tyra Banks Is The Real Mean Girl, Not Naomi Campbell." 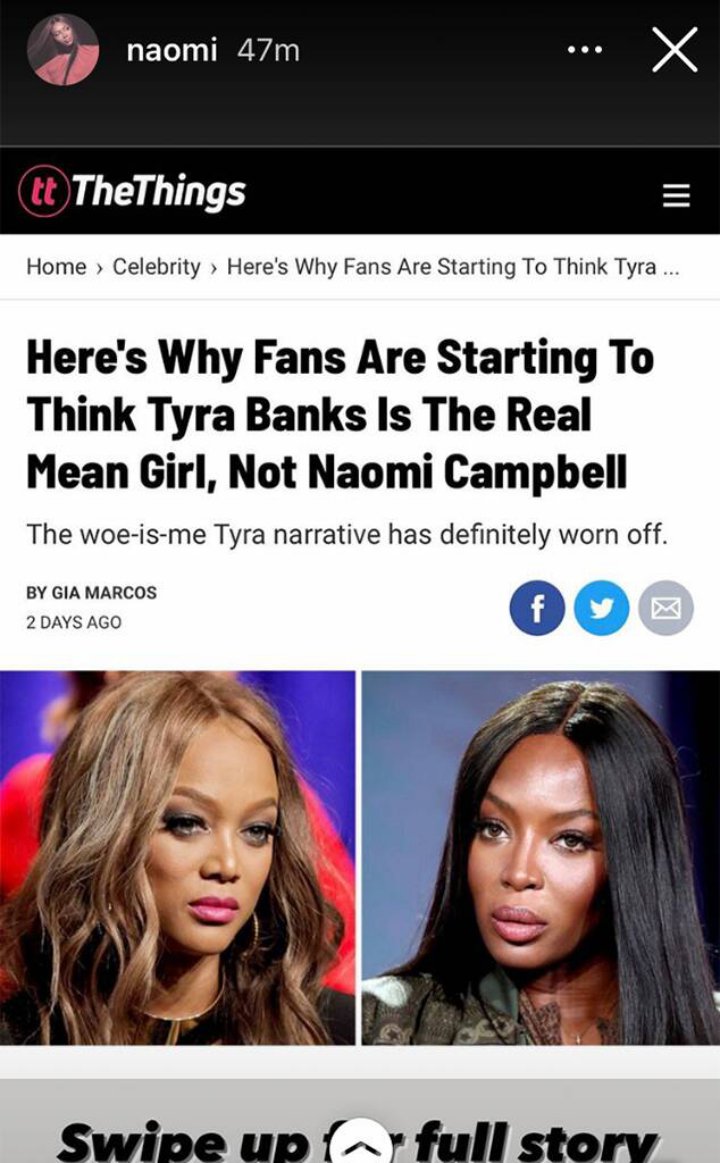 Naomi Campbell posted and deleted an article about Tyra Banks.

Naomi has since deleted the post, but it wasn't before fans caught wind of it. Finding her action hilarious, one user reacted to her Story post, "LMAO Naomi really posted this. I am gagging." Another wrote, "Naomi Campbell is MESSY. Lmfaoooooo!!!!"

A third user was torn when trying to pick a side, "I will always have an appreciation for Tyra but I was always always team Naomi." Another weighed in on the two models' longtime feud, "They both mean so who cares lol. I'll give Naomi credit bc she's mean with her full chest while Tyra throws rocks and hides her hands."

The said article mentioned some of Tyra's controversial moments on "America's Next Top Model" in which she made negative comments on contestants, which she addressed earlier this year. "Been seeing the posts about the insensitivity of some past ANTM moments and I agree with you," she admitted on Twitter. "Looking back, those were some really off choices. Appreciate your honest feedback and am sending so much love and virtual hugs."

As for Naomi and Tyra's rivalry, it dated back to early 1990s. In 2019, Tyra discussed her rift with the Streatham-born model in an interview with The Wall Street Journal. "It wasn't a rivalry, and I'm very sensitive to that word because a rivalry is with two equals to me, whereas one was very dominant," she said at the time.

The 46-year-old beauty detailed, "She was a supermodel and I was just some new girl that got on a plane from Paris, and was studying fashion in magazines at a fashion library." She went on recalling, "I had a very painful early days in Paris. As much as I was booking every single fashion show, people didn't know I was going home at night crying my eyes out because a woman that I was looking up to seemed like she just didn't want me to be there, and was doing everything in her power to make me go away."