The 'Lovers' songstress claims the SB Projects founder asked her to sign 'an ironclad NDA' before she was even allowed to look at the financial records of BMLG.

After Variety broke report of the deal, the country-turned-pop superstar took to Twitter to respond to the second sale of master rights to her first 6 albums in less than two years. In a statement posted on Monday, November 16, the Grammy Award-winning singer/songwriter called out Braun for his alleged fishy attempt to sell her masters back to her.

Swift, who was trying to acquire her masters back for years, revealed that Braun tried to make her sign "an ironclad NDA" before she was even allowed to look at the financial records of BMLG. "I would have to sign a document that would silence me forever before I could even have a chance to bid on my own work," she wrote.

"My legal team said that this is absolutely NOT normal, and they've never seen an NDA like this presented unless it was to silence an assault accuser by paying them off. He would never even quote my team a price," the "Cardigan" singer said, before concluding, "These master recordings were not for sale to me."

Swift was contacted by Shamrock Holdings after they acquired rights to her masters. Though she appreciated the company's kind intention and was "open to the possibility of a partnership with Shamrock," she didn't pursue a deal further after learning that Braun and Ithaca Holdings will continue to reap profits off of her work for many years.

In her statement, Swift also revealed that she has "recently begun re-recording my older music and it has already proven to be both exciting and creatively fulfilling." She teased, "I have plenty of surprises in store." 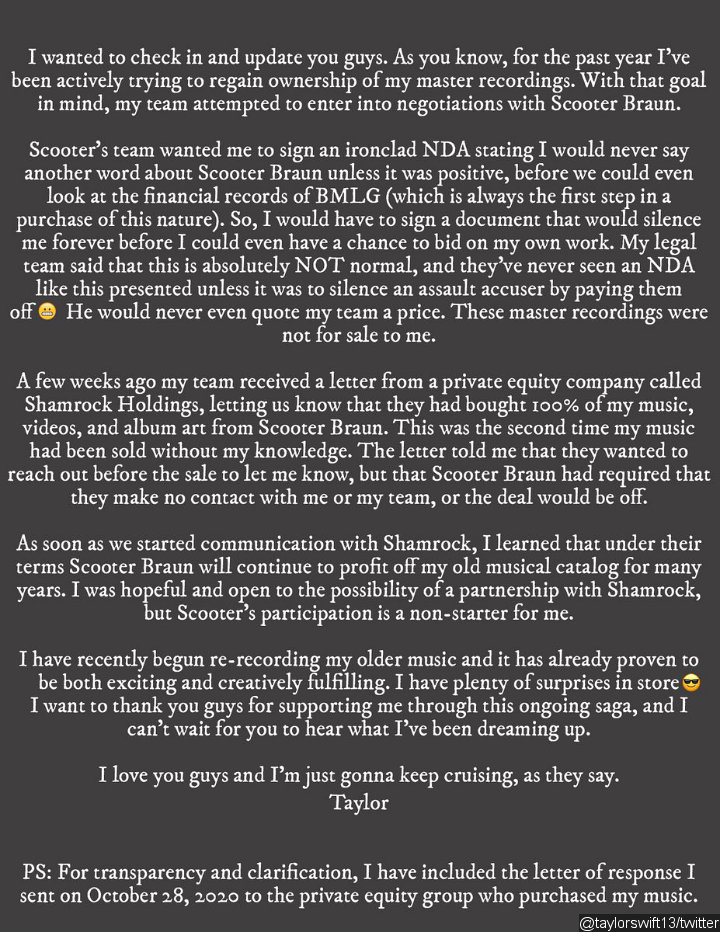 Swift additionally posted a screenshot of a letter she sent to Shamrock "for transparency and clarification," while thanking her fans for supporting her "through this ongoing saga." 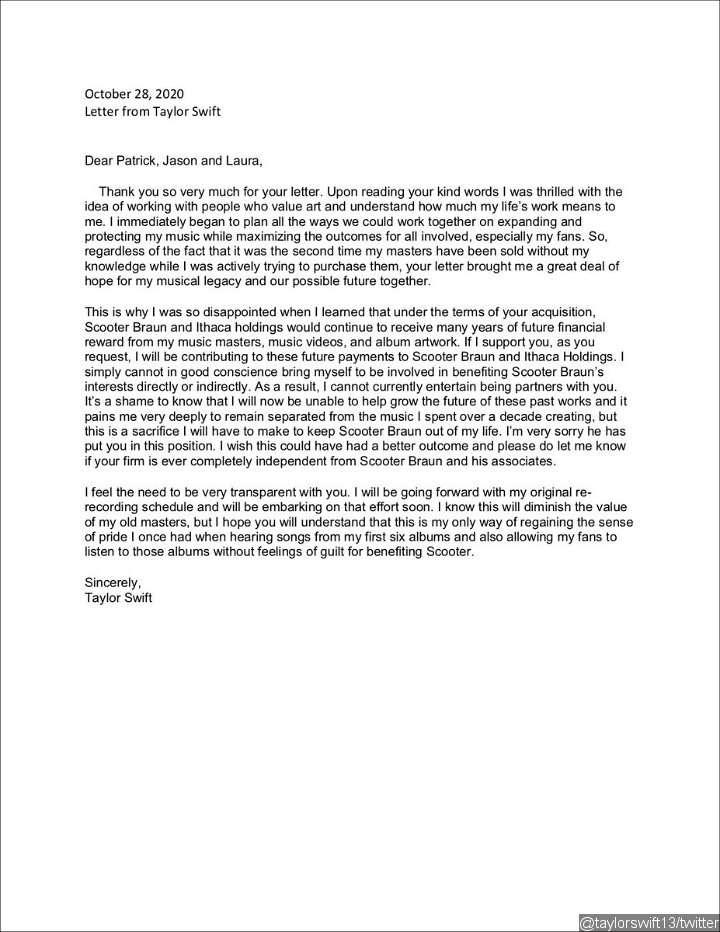 The pop star shared a screenshot of her letter to Shamrock Holdings.

Swift has received support, including from fellow artist Sara Bareilles, after Braun sold her master recordings to Shamrock. The "King of Anything" singer tweeted in response to Variety's report, "I will never not feel like this is just f**king robbery. Greed is a virus too and it's everywhere. F**k that. @taylorswift13 sending you love."

Taylor Swift's 'Fearless (Taylor's Version)' Bounces Back to No. 1 on Billboard 200

ABBA Confirm They Are Bidding Farewell With New Album 'Voyage'