The 'Mean Girls' actress, who served as a judge on season one, was replaced by comedian Urzila Carlson in the second season due to international travel restrictions amid the COVID-19 pandemic.

AceShowbiz - Lindsay Lohan has confirmed her return as a judge on the forthcoming third season of "The Masked Singer Australia".

The "Mean Girls" actress appeared in season one of the program but was replaced by comedian Urzila Carlson for series two, due to international travel restrictions amid the pandemic.

However, after rumors of a big return, Lindsay told "The Ben, Rob & Robbo Internet Show" she'll be back on the line-up for the upcoming season, writing to a producer, "I will be back in Australia for season 3." 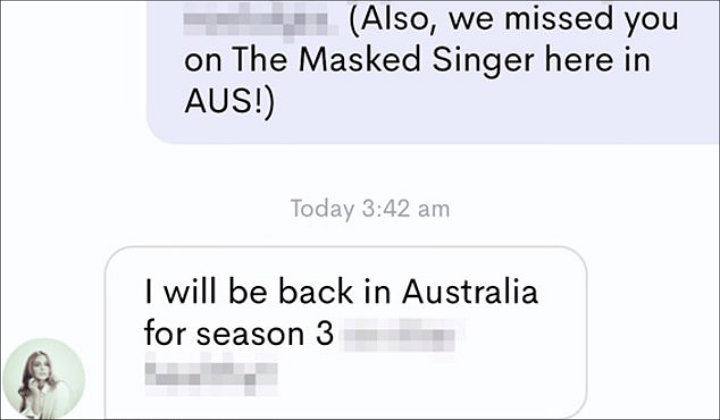 Her mum, Dina Lohan, also confirmed the news by sharing a news story about Lindsay's return on her Instagram feed along with a bunch of clapping emojis.

Lindsay's announcement follows a telling message exchange with fellow judge Dave Hughes, who told his "Hughesy & Ed" show listeners in October the star believed she was on board to return. Channel 10 boss Beverly McGarvey additionally teased that there was "wiggle room" for Lindsay to come back when the network confirmed the show's third season.

The judging panel for "The Masked Singer Australia" comprises singer Dannii Minogue, stand-up comic Dave and radio host Jackie 'O' Henderson. It is unknown whether Urzila will be leaving the show as a result of Lindsay returning or if the judging panel will increase to five next year.

Lindsay previously unfollowed all of her panel members this year following her replacement by comedian Urzila. According to Dave, the "Liz & Dick" star responded at the time, "I think so!!!! I hope so!!!! How's it going over there?"

'The Masked Singer' Recap: Grandpa Monster Is Revealed to Be Controversial Internet Star