The Tesla Chief Executive Officer questions the accuracy of PCR tests after taking four tests in a day, with two coming back positive while the other two are negative.

AceShowbiz - Amid the spike of coronavirus cases in the U.S., Elon Musk has raised doubt about the reliability of COVID-19 tests. On Thursday, November 12, the founder and CEO of SpaceX slammed "bogus" COVID tests after he got mixed results.

The 49-year-old engineer took to Twitter to reveal that he got tested four times in a day, with two coming back positive while the other two were negative. "Something extremely bogus is going on. Was tested for covid four times today. Two tests came back negative, two came back positive. Same machine, same test, same nurse. Rapid antigen test from BD," he tweeted.

When one asked if he feels any symptoms, he replied, "Symptoms of a typical cold. Nothing unusual so far." Demanding an explanation, he tweeted again, "Would be great to hear from people who know a lot about the PCR testing industry. What's the approximate false positive rate, all things considered, for cov2 PCR tests?"

He apparently has spoken to lab technicians and later shared the information he's got. "Lab I just spoke to said cov2 PCR detection (N1 & N3 genes) below 30 cycles is reliable & above 40 cycles is not," so he wrote, before asking, "What is the general population (no knowledge of symptoms) accuracy of a sars-cov2 PCR test & is it possible to generate a false positive if you simply run enough cycles?" 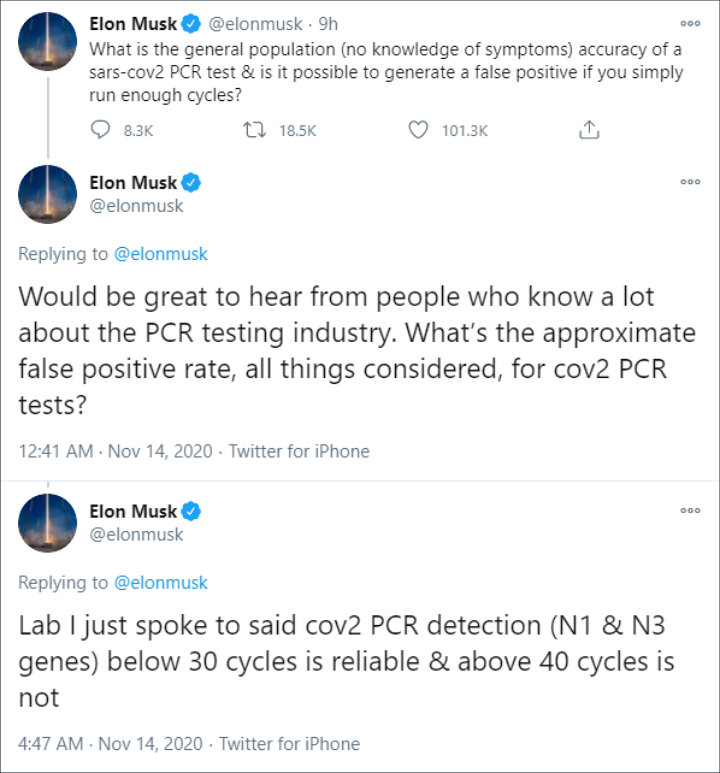 The Tesla founder raised doubt about the accuracy of PCR tests.

Elon also responded to a follower who wondered, "Could this be why we've been seeing such a major spike?" Fueling the speculation, he wrote back, "If it's happening to me, it's happening to others. I'm getting PCR tests from separate labs. Results will take about 24 hours."

After sharing his experience with COVID tests and his opinions, Elon was called out on Twitter for potentially spreading a conspiracy theory. Kyle Griffin, a senior producer of MSNBC's "The Last Word", responded to the Tesla CEO's tweet, "Such an irresponsible tweet."

"How dare he tell us about his personal experience if it contradicts your narrative, you moronic hack," another commented. Someone else schooled the entrepreneur, "It's called science Elon. Even HIV tests aren't 100% accurate. These are brand new. There's no bogus. Don't feed the stupid people with more conspiracy theories."

Olivia Wilde and Jason Sudeikis Split After Nearly 10 Years Together