The 'Peter Pan' hitmaker sets the record straight after a Twitter user throws in an 'incredibly insensitive' question about whether she is expecting following her appearance at the 2020 CMA Awards.

AceShowbiz - Kelsea Ballerini has made it clear that she is not pregnant. When a social media user threw in an "incredibly insensitive" question asking her if she is expecting after she made an appearance at the 2020 CMA Awards, the "Peter Pan" hitmaker responded by urging others to "not judge bloat levels on the internet."

The 27-year-old sent her clapback at the pregnancy speculation via Twitter on Thursday, November 12. "I'm sure you mean well, but it's incredibly insensitive to ask or assume if another woman is pregnant," she tweeted. "I'm not, by the way. Just carrying around my organs. But if I were, I'd want to share that in my own time when I felt ready. Let's not judge bloat levels on the internet." 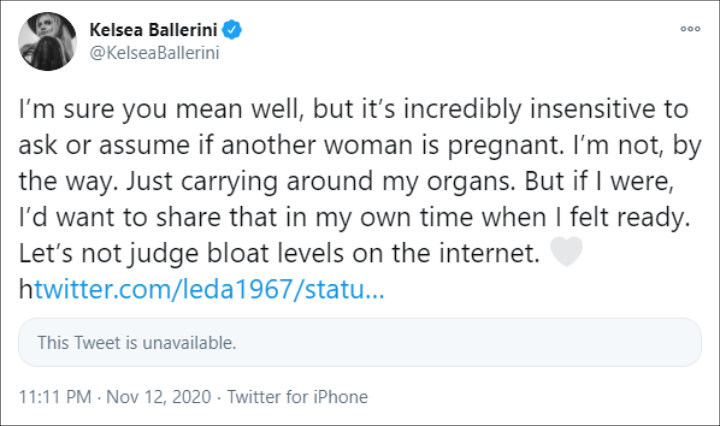 Kelsea's clarification came after she hit the red carpet and the stage at the 54th annual CMA Awards on Wednesday night, November 11. Her appearance prompted one social media user to wonder whether or not she is pregnant. "Could our sweet adorable @KelseaBallerini be pregnant???" the user wrote in a since-deleted tweet.

The "Love Me Like You Mean It" singer's reaction to the offensive question was met with positive feedback. One applauded, "I love the way you replied to this. People really have to be trained on how things are not okay to say in 2020 anymore. They need to see us for more than just a baby maker machine. I'm sorry you had to read that, I love you K!"

Another revealed to have had similar experience as writing, "Girl I hear ya. I get it all the time! I can't have gluten because it literally makes me look pregnant. I've had this happen so many times." A third additionally commended the country singer's specific remark, "I'm 100% saying 'I'm just carrying around my organs' if someone asks if I'm pregnant. Excellent!"

Kelsea showed off two elegant looks when attending this year's CMA Awards. She opted to go with a red floral gown for her red carpet look, and rocked a black fitted tuxedo-style jumpsuit when was performing her country-pop song "Hole in the Bottle".