The eldest daughter of Beyonce and Jay-Z is unveiled as the narrator of the children's book based on Matthew A. Cherry's Oscar-winning short film of the same title.

AceShowbiz - Blue Ivy Carter is lending her voice to "Hair Love" audiobook. The eldest daughter of Beyonce Knowles and Jay-Z, who has previously contributed to her famous parents' songs, has been unveiled as the narrator of the children's book that is based on Matthew A. Cherry's Oscar-winning short film of the same title.

Revealing the exciting news was Matthew himself. On Monday, November 9, the 38-year-old filmmaker took to twitter to share a preview clip that teased the 8-year-old girl's voice. He followed it up with another post in which he notified his followers, "the audiobook is out now. You can buy it today."

Matthew A. Cherry revealed that Blue Ivy Carter is the narrator of 'Hair Love'.

Blue's latest project has since been met with positive feedback. R&B duo Chloe X Halle exclaimed, "c'mon blue," and added clapping hands emojis in their response. Actress Gabrielle Union, on the other hand, offered a lengthier comment, "This is the gift that just keeps on giving!! Being able to hear Blue Ivy give voice to this masterful story is so awesome. They try to bury us, not knowing we are seeds of strength and beauty. LOVE!" 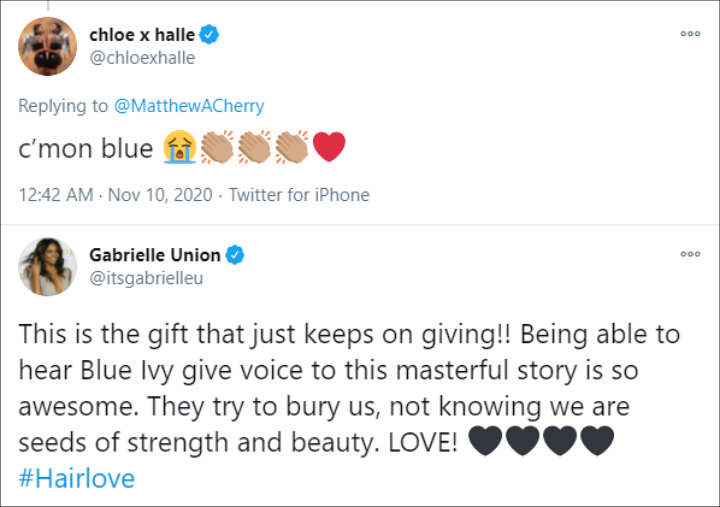 Blue's fans were also thrilled by the audiobook news. One raved, "I feel me like an aunt, a proud aunt of my lil girl." Another fan enthusiastically said, "BLUE IVY CARTER - let me go buy an audible subscription real quick." A third pointed out, "They really tried it coming for her as a toddler. Jokes on them coz miss Blue Ivy is a star."

Narrated by Blue and written by Matthew, "Hair Love" targets kids from age 3 to 5. The story follows one African American father who tried to do his daughter's hair for the first time. Its audible page described the book as an "an ode to loving your natural hair - and a celebration of daddies and daughters everywhere."

Blue's book-narrating project came months after she won an NAACP Image Awards for her collaboration with her mother on the track "Brown Skin Girl" from "The Lion King: The Gift". Along with the "Halo" singer, Saint Jhn and Wizkid, she collected the Outstanding Duo, Group or Collaboration kudo.