The Grammy-nominated rapper posts on his Instagram Stories lyrics of his song 'Intro' in which he mentions his brother's struggles after it's reported that Glenn Johnson died from a self-inflicted gunshot wound.

AceShowbiz - DaBaby has seemingly addressed his brother's alleged suicide in his latest Instagram post. Following news of his elder brother's tragic passing, the 28-year-old rapper posted lyrics from his song "Intro", in which he gives insights into his brother's struggles.

"My brother be thinkin' that we don't love him and let him struggle like we ain't family. Like I won't give up all I got to see you, n***a," read the lyrics posted on DaBaby's Instagram Stories on Tuesday, November 3. He added below it, "I would've gave up all I had to see you happy n***a." 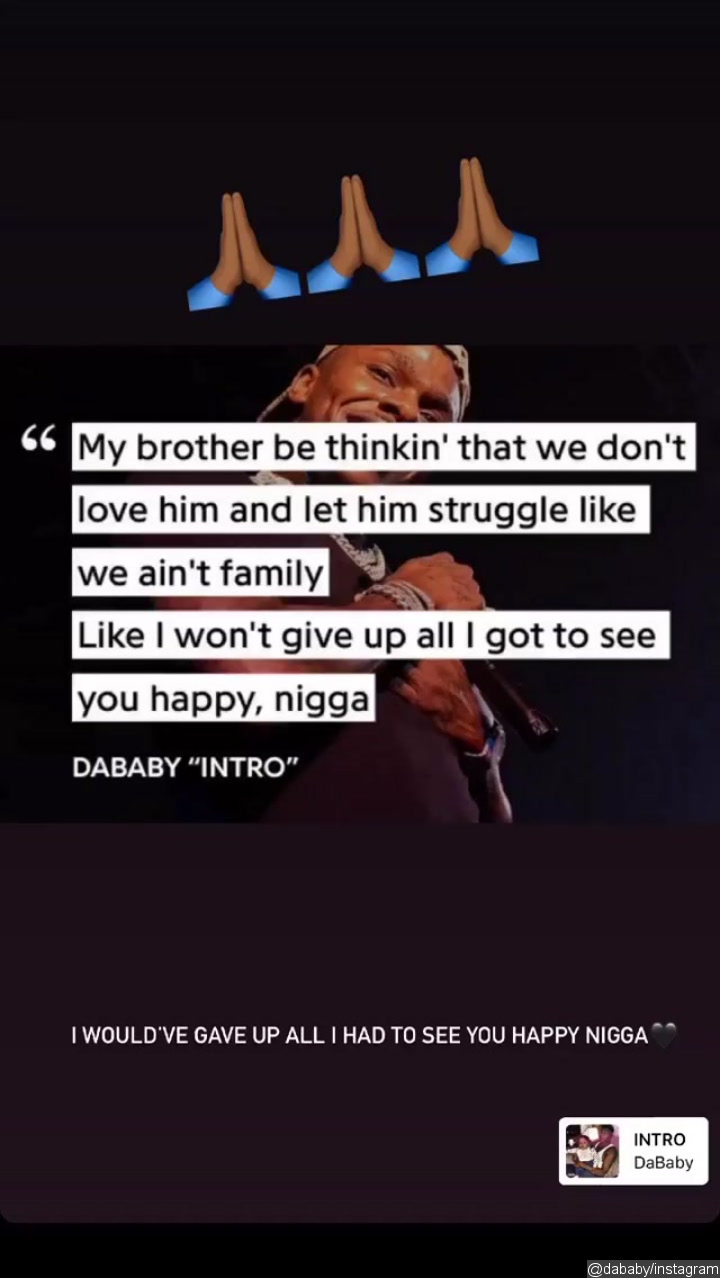 DaBaby's brother Glenn Johnson passed away on Tuesday from a self-inflicted gunshot wound, according to TMZ's sources with direct knowledge of the tragedy. He reportedly took his own life in Charlotte, North Carolina.

Earlier in the day, Glenn posted a video in which he claimed that he had been wronged in the past. He was visibly upset and crying, while holding a firearm in a car in the video. He reportedly shot himself in the head around 4 P.M. local time and died not long after posting the said clip. He is said to have left behind three daughters and a son.

Meanwhile, WSOCTV reported that Glenn was shot and killed in a parking lot on Berkeley Place Drive off Mallard Creek Church Road, but didn't mention that it was a suicide. Police are currently investigating circumstances surrounding his death.

Following news of his brother's passing, DaBaby seemingly paid tribute to his late brother on his Instagram profile. "LONG LIVE MY BROTHER [a black heart emoji]," read a description on his page.

On the same day, DaBay was actively involved in a campaign to get people in North Carolina to vote by offering free rides to the polls. He teamed up with the #NoCap2020 campaign for his initiative, VOTE BABY VOTE. The 28-year-old star posted photos of him with voters at the voting booth. He simply captioned it with a black heart emoji.