The 69-year-old former 'Cheers' star, who is a vocal supporter of President Donald Trump, has taken to her Twitter account to call out the liberal network over its constant COVID-19 fearmonger.

AceShowbiz - Kirstie Alley is one of outspoken Donald Trump supporters, so it won't be surprising to know that she's not a fan of CNN. Still, the former "Cheers" star took to Twitter to further make public her sentiment towards the liberal network with a condemning tweet on Friday, October 30.

Criticizing the network over its constant fearmonger, Kirstie wrote on the blue bird app, "I now Know why my personal friends who walk around in SHEER TERROR of contracting Covid are simply CNN viewers!" She went on to say, "I decided to watch CNN myself to get a their viewpoint and oh my God DID I EVER!!!! IF YOU TOO WANT TO LIVE IN TERROR WATCH CNN!! FEAR OF DYING IS THEIR MANTRA! OMG."

It didn't take long for CNN to catch wind of the tweet. The network decided to hit back at the actress with a more personal jab in its response. Replying to Kirstie's tweet, CNN said, "Kirstie, you are welcome to change the channel - just like countless viewers did every time 'Veronica's Closet' came on TV," referring to the NBC sitcom starring Kirstie as Veronica Chase. "But don't downplay the loss of nearly 230K American lives. And please, wear a mask."

In response to CNN's vicious clapback, NewsBusters managing editor Curtis Houck wrote, "This is some grade-A juvenile stuff here, CNN. But this is also very on-brand of you. No class. No ethics. It's all a game." Another user added, "That washed up actress, Kirstie Alley went after CNN. It did not go the way she'd hoped." 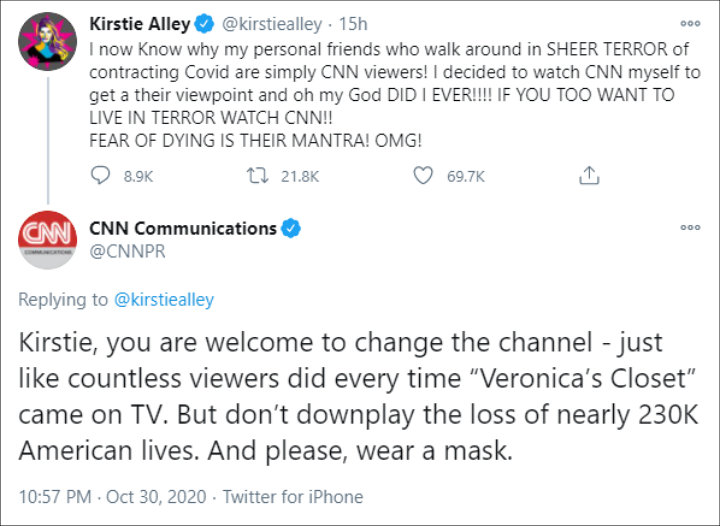 However, some others jumped to Kirstie's defense, calling out CNN for being unprofessional. "Unprofessionalism at its finest! Continuing to show your true colors CNN," one said. Meanwhile, another reply read, "Here's something I did not know: Veronica's Closet was the #3 rated show in 1998 -- pulling in 24 million viewers every episode. Which is what, more than the entire CNN prime time lineup pulls every week?"

Earlier this month, Kirstie received huge backlash after declaring her support to Donald. Calling out the haters, the 69-year-old tweeted, "Don't think I've ever seen so much name-calling in my life. Definitely not on my site here anyway I guess I'm not allowed to have a viewpoint without being called a really nasty names by what I'm going to suppose are really nasty people."