The former 'Cheers' star hits back at her critics, who include filmmaker Judd Apatow and fellow actress Patricia Arquette, after she declared her support for Donald Trump at the upcoming election.

AceShowbiz - Kirstie Alley refused to be bullied over her political stance. Finding herself being attacked for declaring her support to Donald Trump ahead of the November 2020 election, the former "Cheers" star called out "really nasty people" who criticized her over her presidential choice.

On Saturday, October 17, the 69-year-old turned to Twitter to fire back at trolls. "Don't think I've ever seen so much name-calling in my life. Definitely not on my site here anyway I guess I'm not allowed to have a viewpoint without being called a really nasty names by what I'm going to suppose are really nasty people," she tweeted.

Kirstie Alley clapped back at critics attacking her for suppoting Donald Trump.

Alley's clapback came after her initial tweet was met with backlash. "I'm voting for @realDonaldTrump because he's NOT a politician. I voted for him 4 years ago for this reason and shall vote for him again for this reason," she at first wrote. "He gets things done quickly and he will turn the economy around quickly. There you have it folks there you have it." 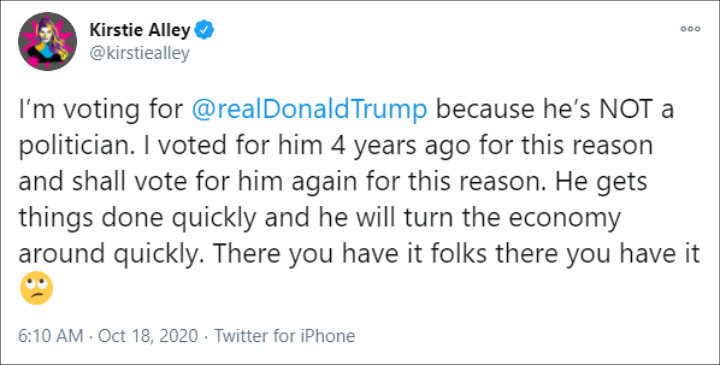 Among Alley's vocal critics was filmmaker Judd Apatow who retweeted her post with a reference at her "Cheers" predecessor that read, "Shelly Long was way funnier than you." Similar jab was also thrown in by "Modern Family" executive producer Danny Zuker who wrote, "Breaking: Shelley Long quitting is no longer dumbest decision made by a 'Cheers' actor."

Another famous person hitting back at Kirstie's endorsement for the Republican presidential nominee was actress Patricia Arquette. When replying to the "Scream Queens" actress' tweet, the "Escape At Dannemora" star commented, "Well my vote for [Joe] Biden canceled yours out. I have done my civic duty of the day." 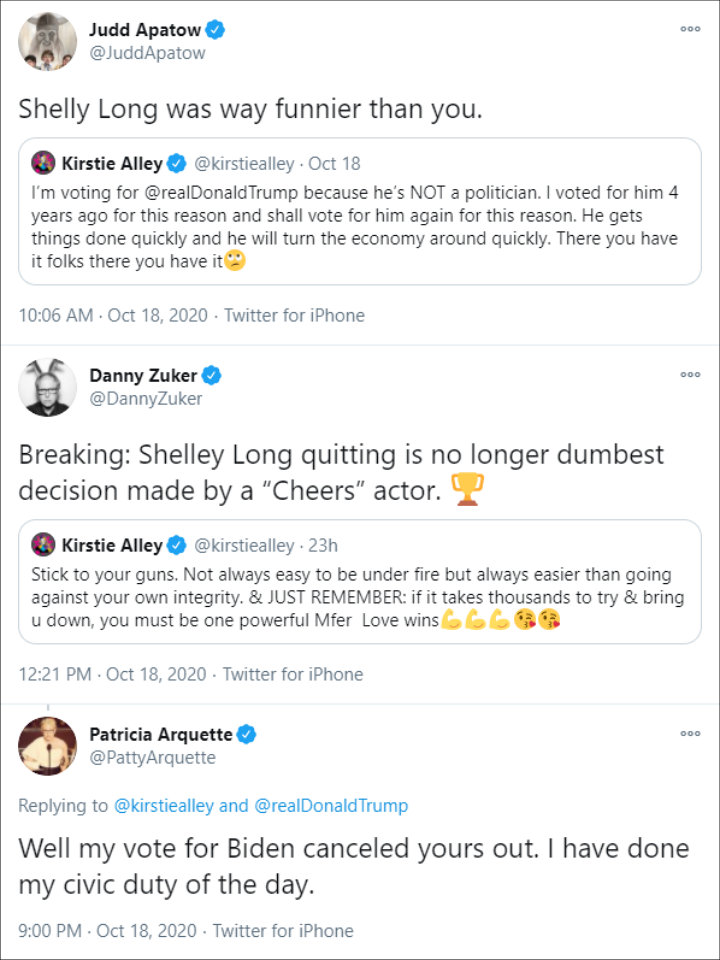 Despite the criticism, Alley remained defiant. Several hours after she clapped back at negative comments, she penned another tweet that read, "Stick to your guns. Not always easy to be under fire but always easier than going against your own integrity. & JUST REMEMBER: if it takes thousands to try & bring u down, you must be one powerful Mfer Love wins."