Not only the British heartthrob stays at the fan's house, but he also helps her feed her fish and leaves her a note because she is not at home when he drops by.

AceShowbiz - No, this isn't a Wattpad fanfiction. Harry Styles drove the Internet wild on Wednesday, October 28 after one Twitter user revealed that the British heartthrob stayed at a fan's house after his car broke down during his recent outing.

Not only he stayed over at her house, but Harry also helped her feed her fish and left a note because the said fan, whose name is Theodora, was not at home when he dropped by. The note read, "Theodora, my car broke down on your street and your dad's friend kindly let me wait at your house with a cup of tea. I'm devastated that we missed each other. Looking forward to meeting you soon."

But that was not the only thing the fan received amid Harry's stay at her house. He also wrote on the cover of his album, "Theodora, sending you all my love. I'm so sorry we missed each other. Until next time." 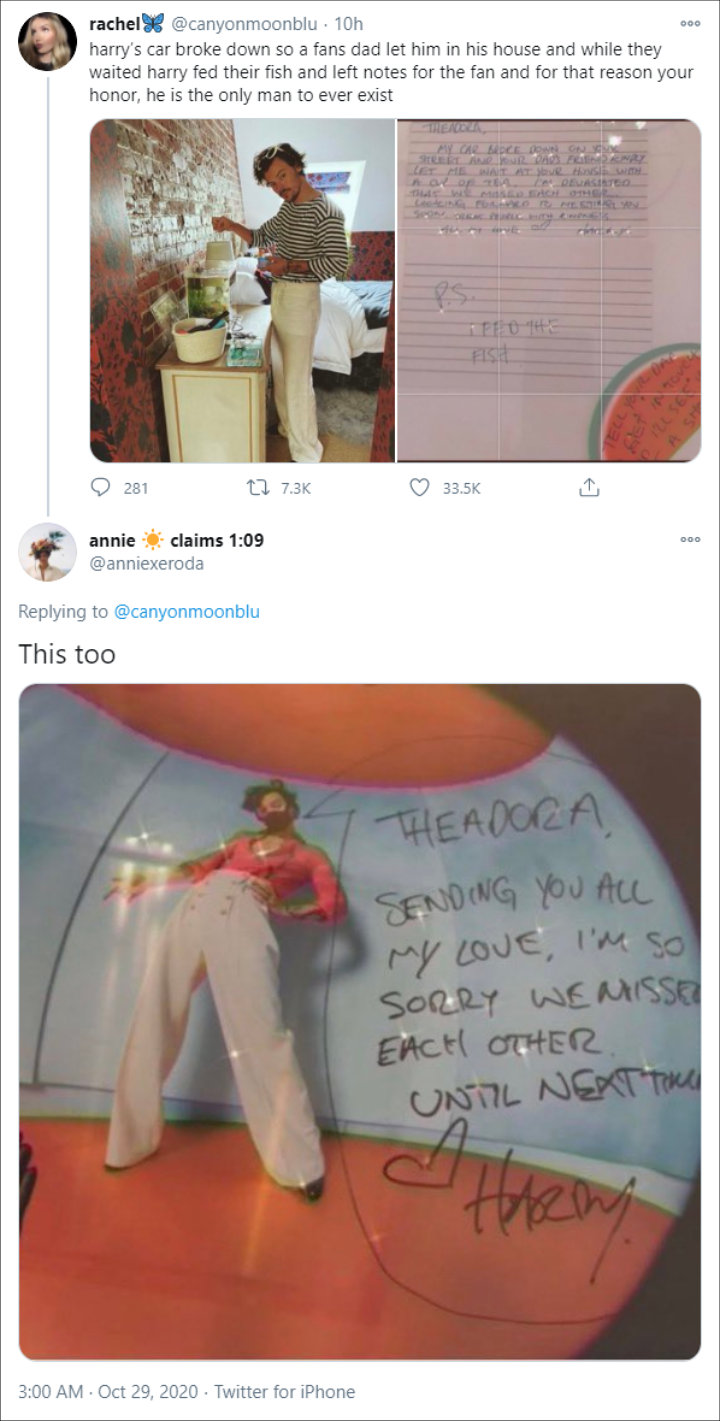 The post soon garnered attention with more than 7,000 people retweeting it while over 32,000 people hit the love button on the post. "Wattpad has assumed control of the simulation," one person joked in response to this story. "i don't want to tell this person what to do or anything but i'm not exaggerating when i say that i would get 'I FED THE FISH' tattooed on my stupid arm," someone else commented.

There was an individual who wrote, "how is he real? like he is the prototypical teen heartthrob crush i get why people write fanfics about him now, he aint for me but i get it." Meanwhile, one person admitted s/he would have collapsed if this happened to him/her. "If I'd come home & found out the celeb crush of my teens had been IN MY ROOM, I would've fainted lol This is like a fangirl's second best possible fantasy scenario. How cute!" so the person said.

Harry Styles Reflects on His Solo Debut: I Was Scared to Get It Wrong

Harry Styles Willing to Sacrifice His Comfort in Conversations About Race