Josh Gad says the former New York City mayor is 'over in a very big way' after he's caught with his hands down his pants while in a hotel room with an actress playing Sacha Baron Cohen's daughter in the film.

In the scene in question, Giuliani went into a hotel room with Bakalova, whom he believed just interviewed him for a conservative news program, to have a drink. The camera then captured the former New York City mayor helping the actress remove a clip microphone from the reporter's dress, and she, in turn, helped Giulani remove his clip microphone as he gave her a pat on the back.

When Bakalova turned away, Giulani lied down on the bed and untucked his shirt. He then reached down into her pants and moved it around for several seconds.

After he's accused of acting inappropriate during the filming of the scene, Giulani defended himself, saying that "the Borat video is a complete fabrication." He explained, "I was tucking in my shirt after taking off the recording equipment. At no time before, during, or after the interview was I ever inappropriate. If Sacha Baron Cohen implies otherwise he is a stone-cold liar."

But the whole sequence of the incident has got Lovato suspicious and she mocked the 76-year-old politician for his explanation. "So you normally drink with reporters, follow them to the bedroom and then lie on the bed and let her take off your mic for you? I guess I've been doin my interviews all wrong...," she sarcastically tweeted. 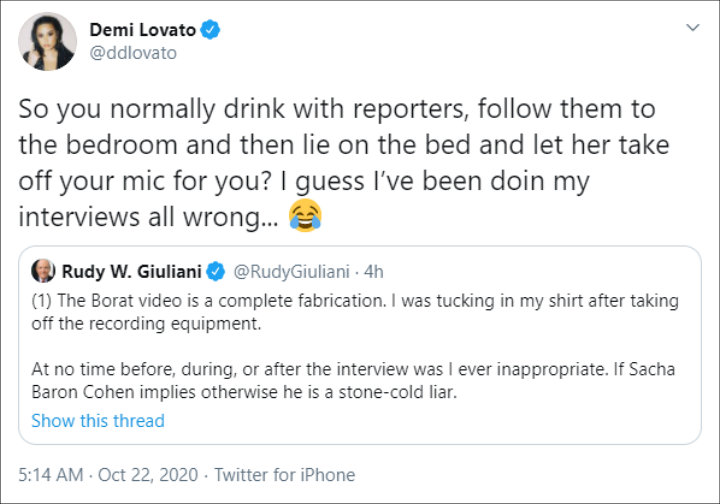 Lovato isn't the only celebrity who has blasted Giulani for his scene in the "Borat" sequel. Josh Gad wrote on his own Twitter account, "Well, looks like the cat's out of the pants. Having seen #Borat2 I can now safely tell you #RudyGiuliani is over in a very big way. It's worse than you think and more uncomfortable than anything I've seen in a recent film, documentary or otherwise."

Judd Apatow commented on Gad's tweet, "I saw it. I wish I could unsee it. But Borat 2 is hilarious." Meghan McCain dubbed it "DISGUSTING," adding, "I don't want to watch anything that's going to make me vomit..." 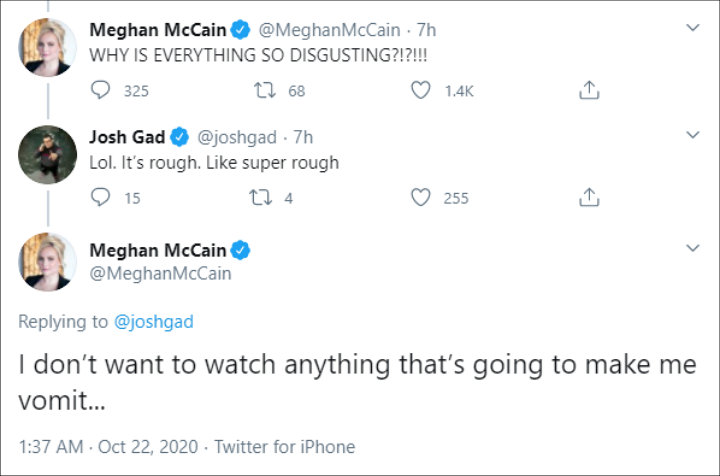 In a series of Twitter posts, Giulani also suggested that his depiction in the film was orchestrated by Joe Biden's team. "This is an effort to blunt my relentless exposure of the criminality and depravity of Joe Biden and his entire family," so he claimed.

"Deadline Hollywood reports CAA had a distribution screening in September where there was no mention of the scene holding any importance," he continued. "We are preparing much bigger dumps off of the hard drive from hell, of which Joe Biden will be unable to defend or hide from. I have the receipts." 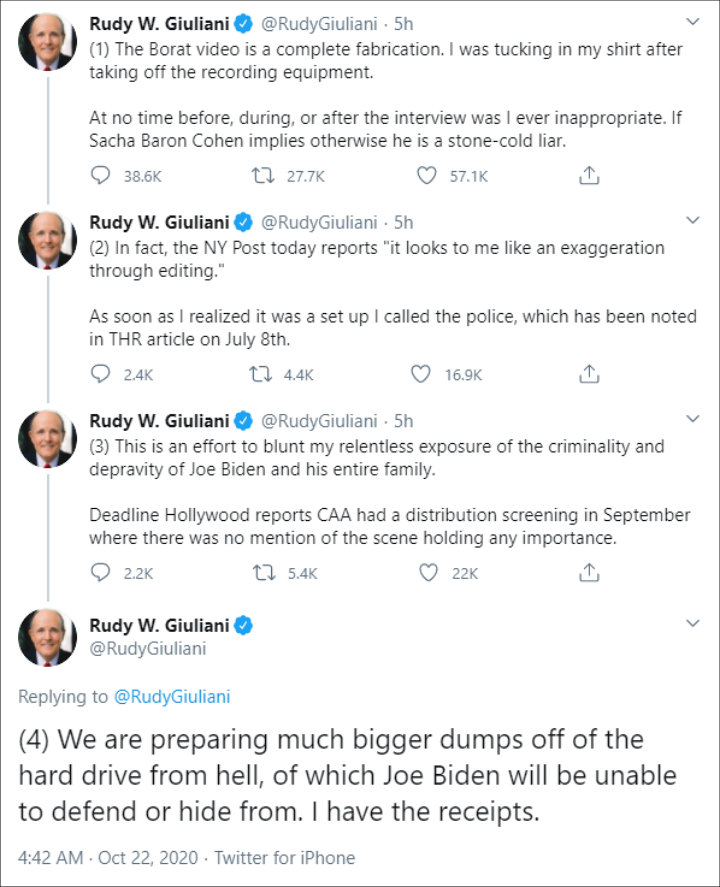 Giuliani defended himself after caught in compromising position in the 'Borat' sequel.

Back in July, Giulani called the cops when he realized that the interview was a prank set up by Cohen for his film. "This guy comes running in, wearing a crazy, what I would say was a pink transgender outfit," he told The New York Post that same month. "This person comes in yelling and screaming, and I thought this must be a scam or a shake-down, so I reported it to the police. He then ran away. I only later realized it must have been Sacha Baron Cohen. I thought about all the people he previously fooled and I felt good about myself because he didn't get me."

Sharon Osbourne: Past Verbal Abuse Directed Toward Rumer Willis 'Should Be A Crime'

'Borat Subsequent Moviefilm' and 'The Crown' Win at 2021 WGA Awards