It all starts after the said fan, who goes by the name Christian on Twitter, posts on the blue bird site a side-by-side photo of the City Girls member and the R'n'B singer.

AceShowbiz - Even as a compliment, it looks like JT doesn't want to be compared to other artists. The rap star apparently hates it so much she even goes all the way to block a fan who said she looks like Ari Lennox.

It all started after the said fan, who goes by the name Christian on Twitter, posted on the blue bird app a side by side photo of JT and Ari. "Hear me out," so s/he wrote in the caption, implying that the musicians do look alike. A number of people agreed with the user, though JT apparently found this offensive and decided to click the block button.

Baffled, Christian shared a screenshot of the City Girls member that had the words, "You are blocked from following @ThegirlJT and viewing @ThegirlJT's tweets." Christian simply added a question mark to express his/her confusion over JT's move. 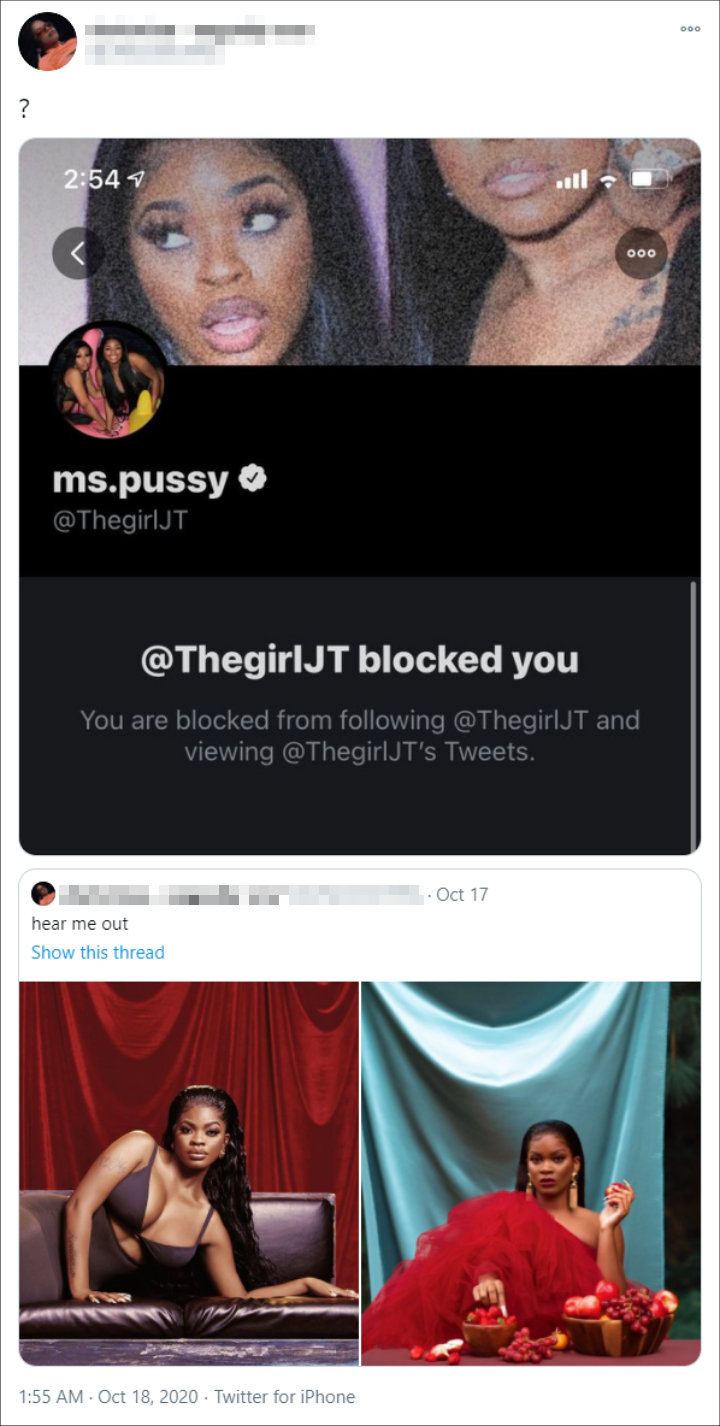 People were just as confused. "Omg JT blocked the person who said she and Ari Lennox look alike??? Why???" one individual said. "Why is JT acting like it's an insult she looks like Ari Lennox? B***h you should feel complimented cause she look better to me," another person did not have it, while an online user commented, "This is very weird. Those women be looking just like her and they're not ugly so…"

"She really gets pissed when ppl compare her to others and idk why," one other wrote, as someone speculated, "Im starting to feel like she thinks she can be the only pretty dark skinned girl in the room....." There was also one who commented, "I liked JT but she being weird now and I'm not understanding."

JT, in the meantime, appeared to address the comparison post in a since-deleted tweet. In response to a follower who pointed she looks like Ari, the female emcee said, "No I don't she pretty but we don't look s**t alike & she don't look like dreezy & y'all say I look like her! So who I look like cause at this point y'all just trying to go viral tf."

JT Unimpressed With Fan Edit of Her BET Awards Wig

JT Claps Back at Haters Mocking Her Wig at BET Awards

JT Deletes Twitter After Dragged for Blocking Fan With Cancer