The 'Triple Frontier' actor pulls over and steps out of his car to tend to the victim, who is lying on the street after being involved in an accident with a car.

AceShowbiz - Garrett Hedlund has come to the rescue of a stranger. On Sunday, October 11, the "Triple Frontier" actor was on a drive with pregnant girlfriend Emma Roberts when they spotted an injured motorcyclist lying on the street and was soon caught on camera pulling his car over to offer a helping hand.

In a video published by Daily Mail, the 36-year-old could be seen stepping out of his car and walked toward the victim of a car accident in Los Angeles. He then squatted down next to the wounded man, who was still wearing his helmet and black leather gloves, and a kneeling woman while waiting for assistance to arrive. 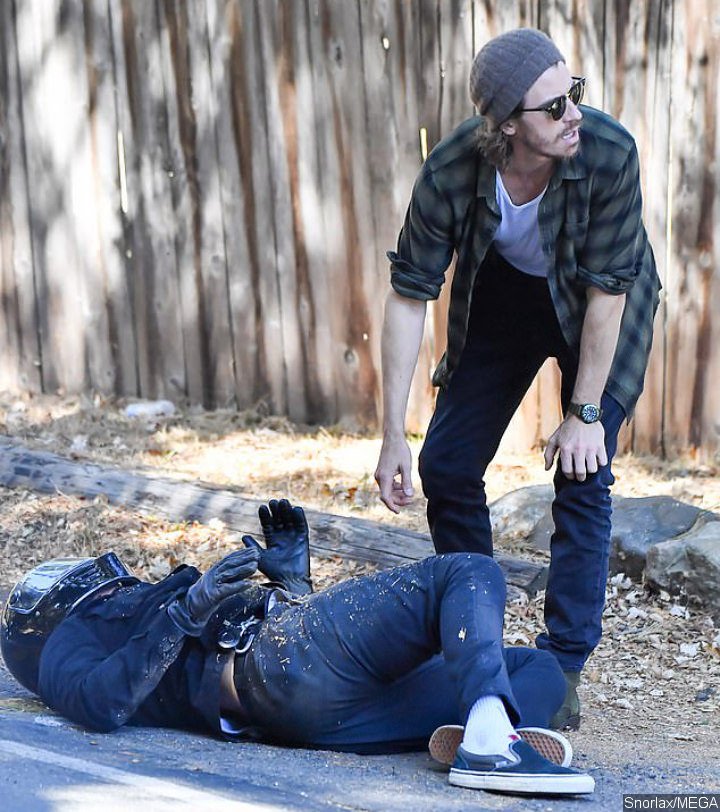 "Emma Roberts and boyfriend Garret Hedlund come to the aid of a fallen motorcycle driver," a source told E! News about the incident. "The couple were driving behind a Prius in L.A. today when the Prius made a left turn and hit the motorcycle driver who allegedly had the right of way. Emma was driving her car behind the Prius with Garrett in the passenger seat and the couple immediately stopped and came to the aid of the driver."

The "Tron: Legacy" actor and the "American Horror Story" actress managed to continue their trip afterward. They were later spotted meeting up with friends and left with a box of treats. The father-to-be opted to wear a white t-shirt under a dark green shirt and a pair of black jeans, while his 29-year-old girlfriend rocked a white blouse and black trousers.

Garrett's good Samaritan moment came just one week after Emma hosted a socially-distanced garden baby shower. Taking to Instagram on October 4, his actress girlfriend let out two pictures of herself wearing a long floral dress for the special occasion. "So grateful to my family and pod for making my pregnancy feel so celebrated during such wild times," she wrote alongside the snaps.

The lovebirds were first linked romantically together back in March 2019. More than a year later, Emma came forward to announce that they are expecting their first child together. "Me...and my two favourite guys," she showed off her baby bump in an Instagram post she shared in late August.

'Emily in Paris' Star Appears to Agree With People's Criticism on the Series, Teases Season 2