While he claims that he wasn't not surprised by the grand jury controversial ruling, the Lakers star admits he's still 'hurt' by the decision not to charge the three officers who shot and killed Breonna.

AceShowbiz - LeBron James joins the list of public figures who have weighed in on the grand jury ruling in Breonna Taylor case. Clearly disappointed by the controversial decision, the NBA star took to Twitter to express his frustration over the injustice.

"I've been lost for words today! I'm devastated, hurt, sad, mad!" he wrote on Wednesday, September 23. "We want Justice for Breonna yet justice was met for her neighbors apartment walls and not her beautiful life." 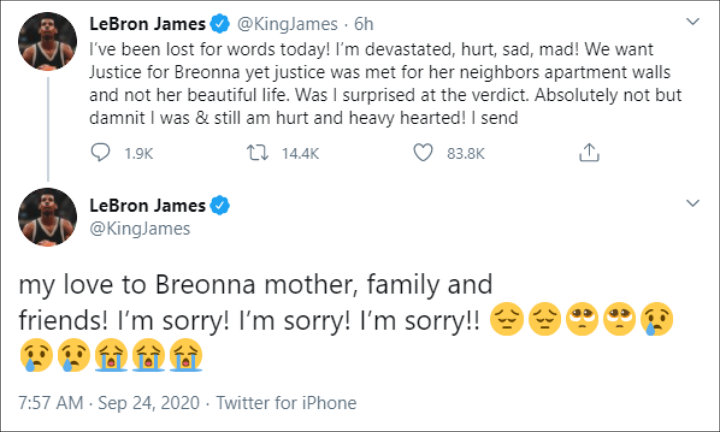 LeBron James is 'devastated' over decision on Breonna Taylor case.

LeBron later posted another message in which he sent his love to all black women out there and promised to fight for them. "The most DISRESPECTED person on earth is THE BLACK WOMAN!" so he claimed. "I promise you I'll do my best to change this as much as I can and even more!! LOVE to you QUEENS all over this country and beyond!"

LeBron isn't the only celebrity who is enraged by Kentucky grand jury officials' decision that they will not file murder charges in the shooting death of Breonna. Kerry Washington remarked, "Daniel Cameron is on Donald Trump's short list as replacement of #RGB (sic) on the Supreme Court. The same man who decided to not charge the officers responsible for killing #BreonnaTaylor. Vote."

Viola Davis fumed on Twitter, "Bulls**t decision!!! BLACK LIVES MATTER!!! Cannot be said enough times." Mandy Moore tweeted, "I don't have the words. #BreonnaTaylor and her family deserve justice," while "Schitt's Creek" star Dan Levy added, "Disgusted. Enraged. Heartbroken. Please contribute if you can. Justice should not be a luxury."

George Clooney also blasted lawmakers in his native Kentucky for failing to serve justice for Breonna, writing that he's "ashamed" of the decision. "The justice system I was raised to believe in holds people responsible for their actions," he said in a statement.

The "Money Monster" star continued, "Her name was Breonna Taylor and she was shot to death in her bed by 3 white police officers, who will not be charged with any crime for her death. I know the community. I know the commonwealth. And I was taught in the schools and churches of Kentucky what is right and what is wrong. I'm ashamed of this decision."

LeBron James Dodges Question About Whether He'll Get COVID-19 Vaccine

LeBron James Responds to Hecklers' Ejection at Lakers Game: 'I Missed That Interaction'