The former emergency medical technician was killed by police during a botched raid in March, but only one of the officers involved in the incident will be held accountable with a low level felony charge.

AceShowbiz - Kerry Washington, Viola Davis and Common are among the names raging about Wednesday's (September 23 announcement by Kentucky grand jury officials that they will not file murder charges in the shooting death of Breonna Taylor.

The Louisville 26-year-old was shot and killed by police officers during a botched raid in March, days before the death of another African-American, George Floyd, at the hands of police in Minnesota, sparked a resurgence of the Black Lives Matter movement and protests against systemic police racism across the U.S. and around the world.

Breonna's name has been kept alive by legal representatives, politicians, celebrities, and protesters who believe justice has not been served in the case, and Regina King and Uzo Abuda both wore T-shirts protesting her death while accepting Emmy Awards on Sunday, September 20. The tragic former emergency medical technician's photograph also appears on the September cover of the U.S. edition of Vanity Fair magazine.

But Kentucky Attorney General Daniel Cameron's Wednesday announcement that only one of the officers involved in the incident, former Louisville detective Brett Hankison, will be held to account - with a low level felony charge of wanton endangerment in the first degree - has sent protesters roaring back onto the streets of Louisville as social media users flock to their keyboards in fury.

Kerry, Viola and Common were quick to share their thoughts - Common posted more than 10 times on Twitter, sharing video footage and speeches of black icons, including Malcolm X and Martin Luther King Jr.

"Law and order exist for the purpose of establishing justice and when they fail in this purpose they become the dangerously structured dams that block the flow of social progress," the Oscar winner wrote alongside a clip of King Jr. saying the same words. 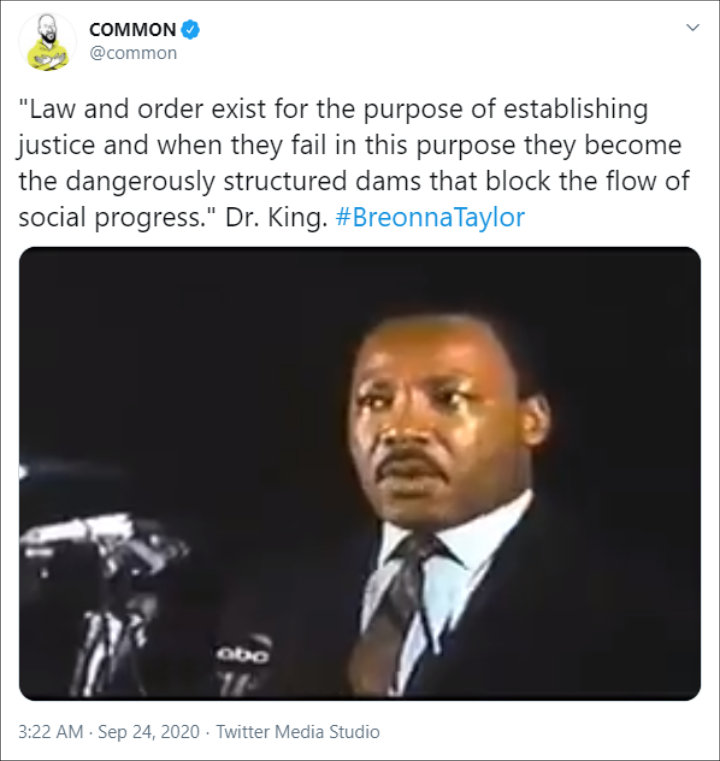 "Scandal" star Kerry, who is still mourning the death of her legal hero Ruth Bader Ginsburg on Friday, added: "Daniel Cameron is on Donald Trump's short list as replacement of #RGB (sic) on the Supreme Court. The same man who decided to not charge the officers responsible for killing #BreonnaTaylor. Vote." And Viola added, "Bulls**t decision!!! BLACK LIVES MATTER!!! Cannot be said enough times." 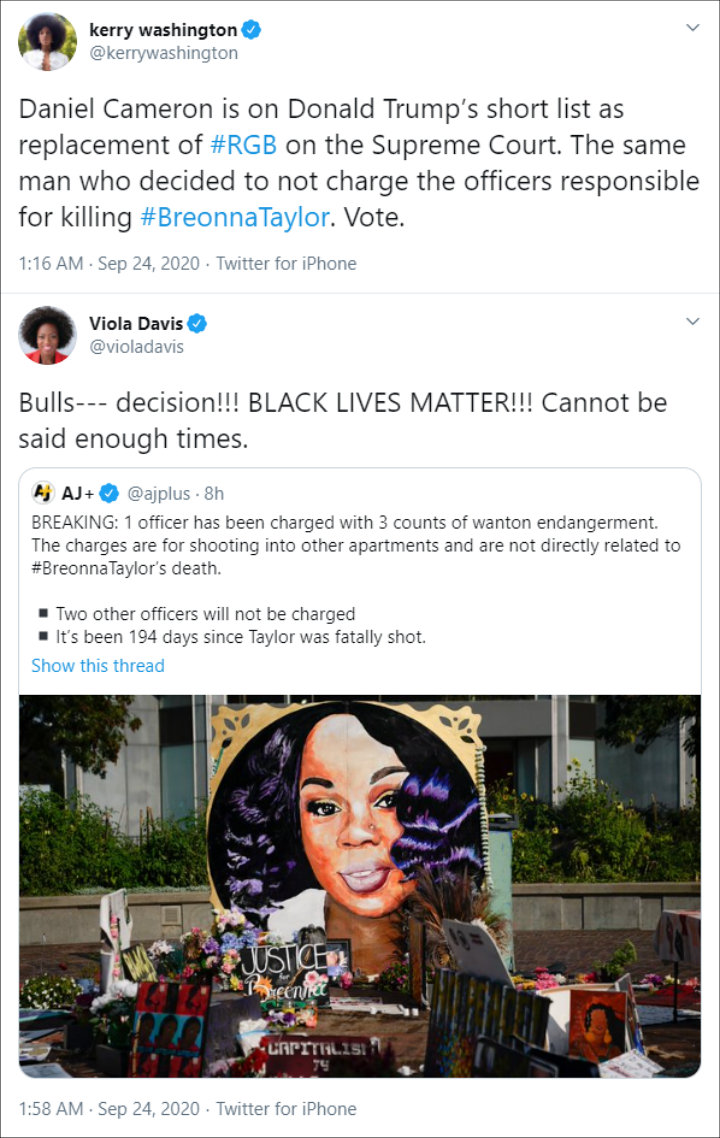 "I don't have the words. #BreonnaTaylor and her family deserve justice," "This is Us" actress Mandy Moore tweeted, while "Schitt's Creek" star Dan Levy wrote: "Disgusted. Enraged. Heartbroken. Please contribute if you can. Justice should not be a luxury," and actress Mia Farrow asked: "So, no one is responsible for killing #BreonnaTaylor?". 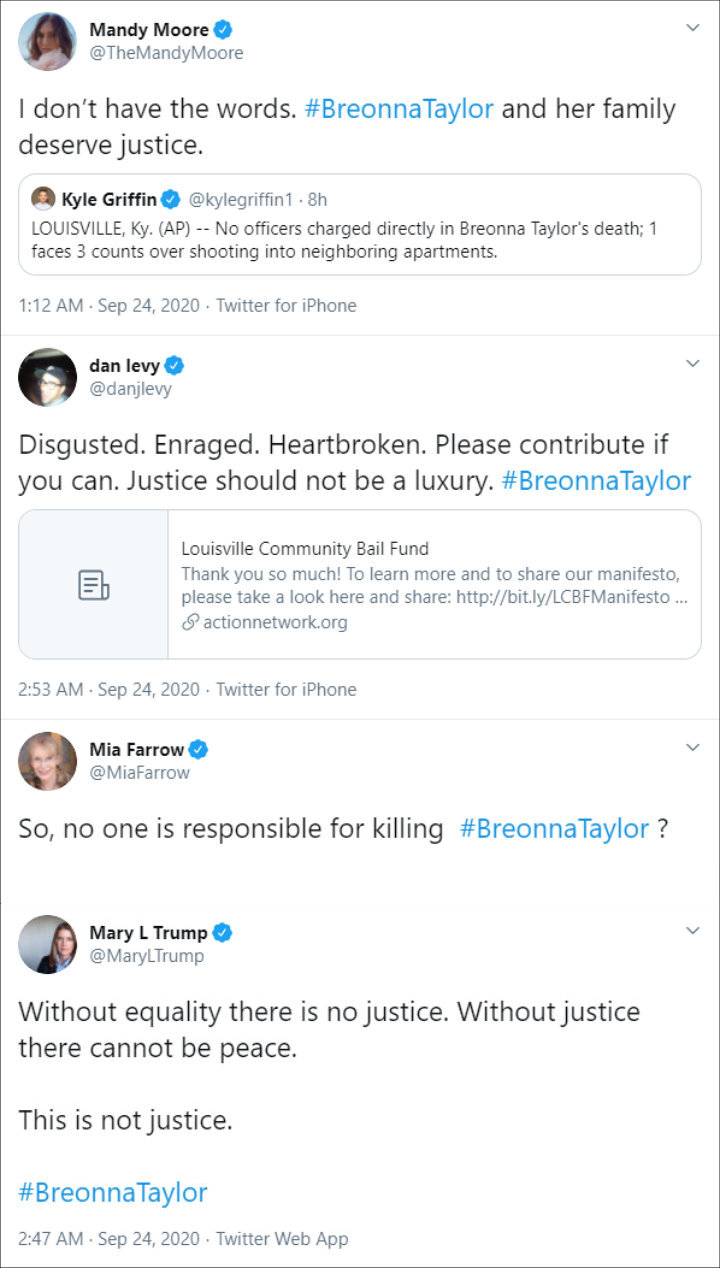 There were other social media protests from John Legend, "Black-ish" star Yara Shahidi, Emmy Rossum and even President Donald Trump's niece Mary, who wrote on Twitter: "Without equality there is no justice. Without justice there cannot be peace. This is not justice. #BreonnaTaylor."

Kerry Washington Mourns Death of Beloved Dog: She Was a Witness to My Life