After selling his shares in Aviation American Gin, the 'Deadpool' star is now confirmed to be in talks to invest in the Welsh soccer club, which plays in the National League.

AceShowbiz - Ryan Reynolds might be adding English soccer team's investor under his name. Having struck a multi-million dollar deal with Diageo for his Aviation American Gin, the "Deadpool" star was unraveled to have been involved in talks about him investing in a non-league Welsh club called Wrexham AFC.

The 43-year-old was confirmed to be a potential shareholder in an announcement made by The Wrexham Supporters Trust Board on Wednesday, September 23 following a Special General Meeting the day before. "As confirmed this morning, 97.5% of voters (1,223 members) voted in favour of the Resolution," the announcement read.

"As a result, talks with the proposed bidders will now continue and we are in a position to confirm the two people interested in investing in Wrexham AFC," the statement posted on the club's official website continued. "Ryan Reynolds is an award-winning Canadian actor, writer, producer and business entrepreneur whose credits include Marvel's 'Deadpool.' "

The release additionally noted that "It's Always Sunny in Philadelphia" creator and star Rob McElhenney has joined Ryan as potential co-investor. "In due course, Mr. McElhenney and Mr. Reynolds will put forward their vision for Wrexham AFC and proposal for members to vote on at a second Special General Meeting," it concluded.

Prior to this revelation, Trust director Spencer Harris opened up about the investment with BBC Wales. "All we're going to commit to - because we're not going to put pressure on ourselves - is that we will conclude the discussions as soon as possible," he said. "We will get to a position when the potential investors put forward a deal and the next stage… we would put that in front of the members for a vote if they wish to proceed with that deal or not."

Ryan has since taken to Twitter to reinstate the investment news. Replying to a fan's old tweet wishing him to turn up in Wrexham, he simply wrote. "Yep, you never know." In a follow-up tweet, he lightheartedly joked, "I've waited 8 years to respond to this tweet." 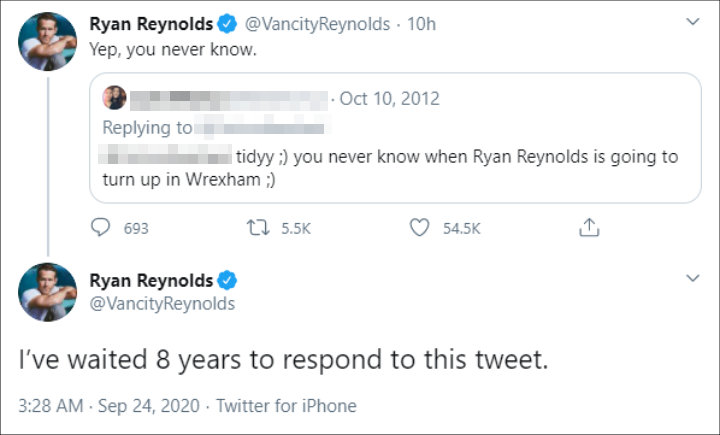 Ryan Reynolds confirmed the news that he will invest in Wrexham AFC.

This revelation came a little over a month after Ryan's Aviation American Gin got acquired by Diageo for an estimated $610 million. At the time, he shared, "A little over two years ago, I became an owner of Aviation Gin because I love the taste of Aviation more than any other spirit. What I didn't expect was the sheer creative joy learning a new industry would bring."

"Growing the brand with my company, Maximum Effort Marketing, has been among the most fulfilling projects I've ever been involved with," he added in the press release. "I want to thank Diageo for their incredible team and passion. We're so excited for the next chapter of Aviation Gin, which, I promise, will require just as little reading."

These Celebrities Rave About Getting COVID-19 Vaccine