After hinting that she may be pregnant with Moneybagg Yo's baby on Twitter, the KYCHE Extensions founder takes to Instagram Stories to put the rumor to rest.

AceShowbiz - Is baby on the way for Ari Fletcher and Moneybagg Yo? The model and social media personality caused quite a stir on social media on Monday, September 21 after hinting on Twitter that she might be pregnant.

"I don't know if I'm pregnant or not, I ain't took a test," she tweeted, seemingly having a gut feeling that she may be eating for two now. Though so, she refused to confirm it immediately and decided to postpone it after her current trip to Las Vegas. "I'll keep y'all posted after Vegas," she promised her followers.

While Ari herself was still not sure if she's expecting a child with her boyfriend, some people have expressed concern over the supposed baby's safety if she's indeed pregnant, considering her drinking habit. "All that drinking ... damn baby be dead by then," one wrote.

"Lmaooooooo s**t done fell out already," another commented, while someone else refused to believe that Ari is pregnant, "Hunny that baby is gone Girl you just drunk patron with Nikki you not pregnantttttttt." Someone else, however, believed that the supposed baby would be okay, explaining, "Gurl if shes early enough that liquor not effecting anything."

However, just a few hours later, Ari herself took to Instagram Stories to put the rumor to rest. Sharing a video from her Las Vegas vacation, the 25-year-old told the camera, "I'm not pregnant." She looked pretty high from the substance that she was smoking while dipping in the pool.

Before Ari denied that she's pregnant, her tweet apparently sparked a question from a fan who was curious about whether she's thinking about getting married. To this question, the KYCHE Extensions founder simply replied, "No." 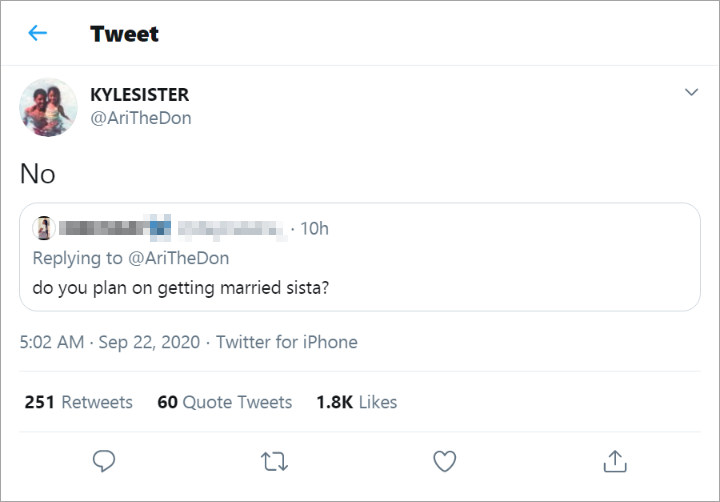 Ari Fletcher said marriage is not in the cards.

Her answer sparked mixed responses from fellow users, as some thought that it wasn't the best decision. "i don't really get it , no disrespect, but if someone can commit to creating a whole child with someone ,as in a life long responsibility, why do people grow comitment issues when it comes to marriage ?" one weighed in.

Some others, however, agreed with Ari, with one sharing, "I don't either, I been like that since I was younger but now that I'm 22 & actual been in a real relationship I STILL FEEL THE SAME Rolling on the floor laughing the image is cute but idk i can't."

"And that's okay!" someone else defended Ari. "Marriage isn't for everyone. Some people be so caught up in the image of getting married and be divorced a year later. And some couples last longer than that without being married. To each it's own."

Report: One Person Stabbed During Ari Fletcher and Alexis Skyy's Altercation in Atlanta