The 'Say So' hitmaker comes out with a response to the long-running rumor months after the '7 Rings' singer claimed in an interview that they had worked together on a new tune.

AceShowbiz - Doja Cat has revealed she's teamed up with Ariana Grande on a new song - but a collaboration between the pair and Nicki Minaj isn't in the pipeline.

The 24-year-old singer took to her Twitter page to respond to the long-running rumour that she, Ariana and Nicki have joined forces for a new tune. And while she set the record straight about the collaboration, or lack thereof, the "Say So" star delighted fans when she admitted that a duet with Ariana has already been recorded.

"I just want you guys to know the DNA (Doja, Nicki, Ariana) collab is completely a fan made rumor and there wasn't any plan for it to happen but it sounds like a great idea and i'd love to do it," she wrote on Sunday, September 20. "Just wanted to debunk it all for you guys cuz i see you all in the comment section buggin out about it."

She continued, "HOWEVER the Ari and Doja collab exists entirely." 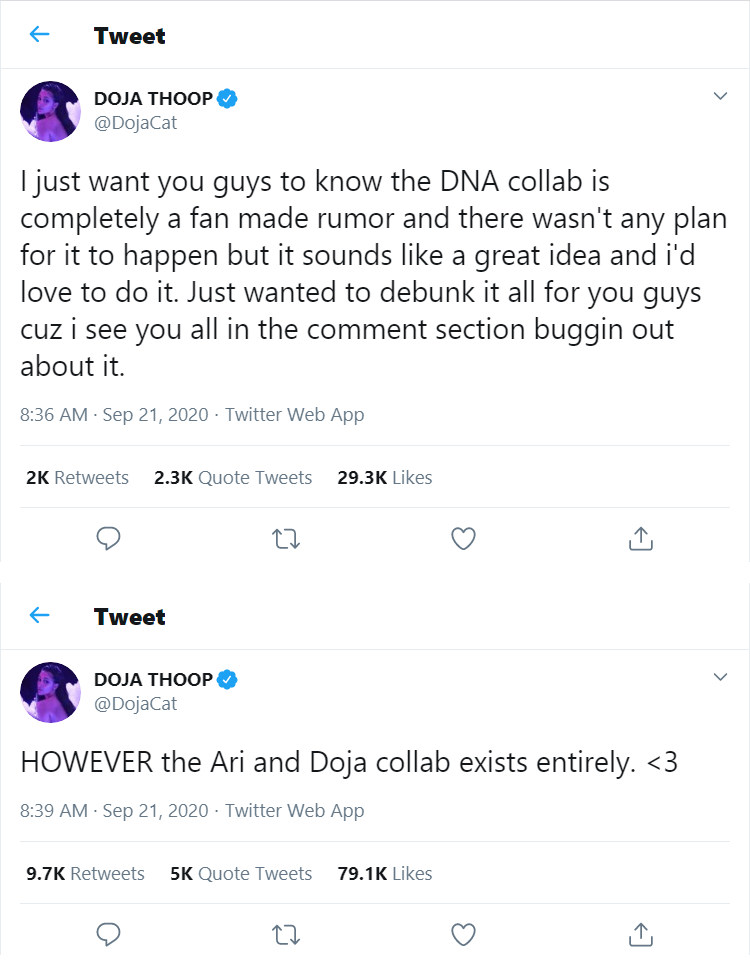 Doja Cat addressed the rumor of her collaboration with Ariana Grande and Nicki Minaj.

Her tweets come after Ariana revealed back in May during an interview with Zane Lowe that she had teamed up with Doja on a new tune.

"I was able to work with her earlier this year on this song that I want to save for whenever it's time again to drop," the "Thank U, Next" songstress teased at the time. "I remember when I first wrote it and sent it to her, she was in the shower and she was like, 'B**ch, I love this'."

Drew Barrymore: Being Sent to School for Troubled Kids Did Save My Life

Doja Cat Denies Beefing With Nas, Is Grateful He Notices Her on 'Ultra Black'

Video: Teyana Taylor Breaks Down in Tears When Elton John Praises Her Music

A$AP Ferg Denies Being Kicked Out of A$AP Mob