The 'Aquaman' star takes to his Instagram Stories to document his unfortunate road trip after his car's engine fails on a desert highway under 110 degree heat.

AceShowbiz - Jason Momoa made the best out of him being stranded in the desert. Being forced to pause a recent road trip after his car broke down on a desert highway, the leading man of "Aquaman" went shirtless and took to social media to document the unfortunate event.

Making use of Instagram Story on Thursday, September 17, the 41-year-old shared a series of videos that captured him sporting only black and white striped pants, flip flops and sunglasses. The first clip saw him sitting on his cooler as country music played in the background and a few opened cans of Manalanu Water were laid next to him. He noted that the temperature was 110 degrees.

Jason Momoa was stranded in the desert due to his broken car.

The second clip, which was captioned "the only way to slow me down," displayed the husband of Lisa Bonet showing off the "God d**n radiator." He followed it up with other footage with a note that read, "I love the desert catching some rays enjoying the time alone just me and @colterwall," and another one that had him pleading for someone to send him "more @manalanu.water." 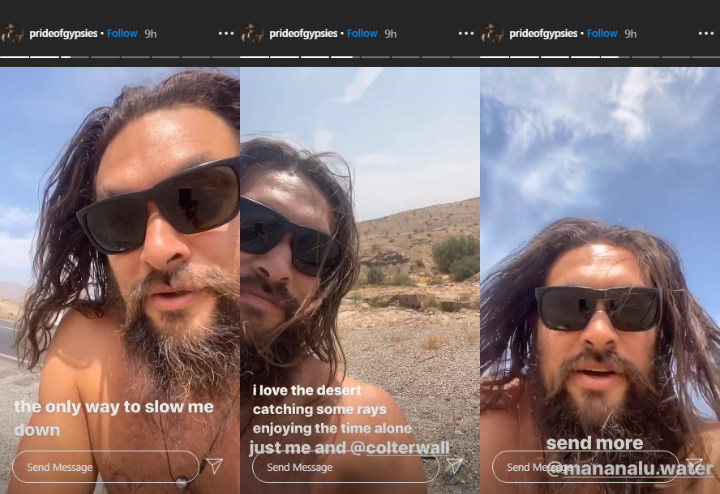 Jason Momoa went shirtless on the side of the road.

Around an hour after being stuck on the side of the highway, the former "Game of Thrones" actor finally got his car fixed. Through two videos featuring Willie Nelson's "On the Road Again" in the background, he revealed that he has resumed his trip.

"On the roam again life I love is making movies with my friends," he noted in the first, and credited his "boyfriend @toddstopera" for the repair in the second one. He also unveiled the reason for the break down in the last clip. "Turns out it was the muffler bearings, happens every time," he said to the camera. 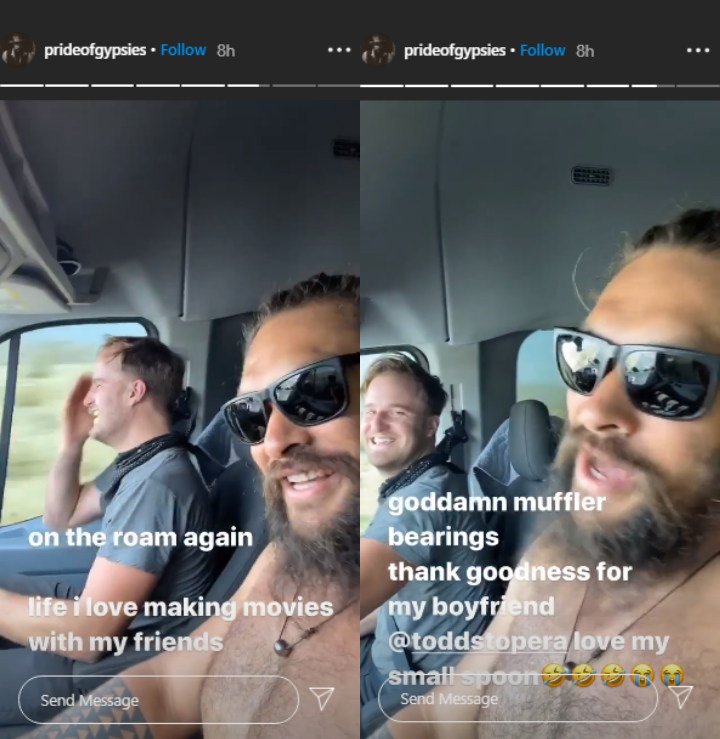 Jason Momoa resumed his trip with a friend.

Ironically, Jason had previously boasted about restoring his wife's very first car, a 1965 Ford Mustang, for her 52nd birthday present. In an Instagram video posted in August, he claimed it to be a "dream come true," before explaining, "To be in this passenger seat, with my wife here and surprise her and our babies in the back... Riding in her first car when she was 17... I'm excited to see her face."