When the 'B***h From Da Souf' rapper gushes over her on Twitter, the 'Shea Butter Baby' singer responds by saying, 'Baby I love you too. You can rap like s**t angel.'

AceShowbiz - Not only being popular for her great music, but Ari Lennox has also always been known for speaking up against any kind of colorism. However, her recent social media move got a lot of people fuming as she showed love and support to Mulatto, who has been facing backlash over a video of her calling her darker-skinned friend "orang utan."

It all started after Mulatto gushed over Ari on Twitter, saying, "I love Ari Lennox." In response, the R&B singer enthused back, "Baby I love you too. You can rap like s**t angel." Leaving a face throwing a kiss emoticon, she then added, "Let's work." 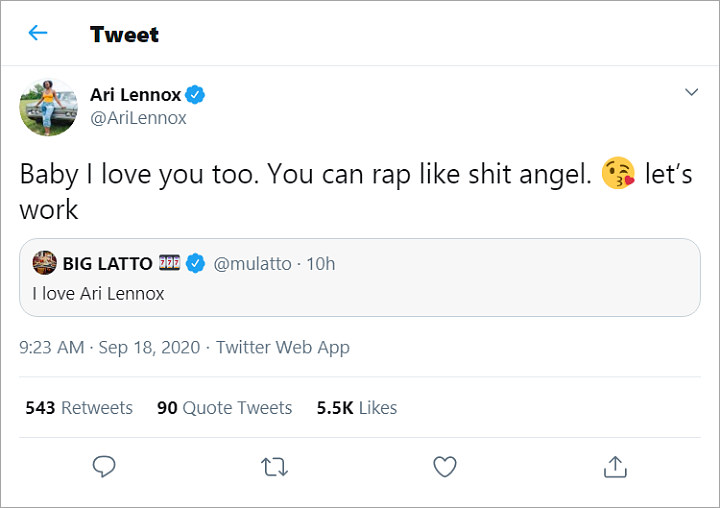 Even though the two ladies have nothing but love for each other, it's not the case with other people considering what Mulatto did before. "shes a colorist and her name is a racial slur ari dont do it," one person said. "Y'all are so funny like 23 hours ago there was not a video floating around on here of her calling a woman of darker complexion a whole orangutan… Y'all get on my f**king nerves," somebody commented.

One other person warned the singer, "ari she was calling her 'bestfriend' an orangutan." On the other hand, an individual commented, "and not u working w girls who called ppl their personal orangutans and say they bits is burned. ion know ari. that ain cute…" There was also an online user who said, "girl she literally called a dark skinned black woman and orangutan and said more colorist s**t about her genitals...pls."

Mulatto landed in hot water after a video surfaced of her describing her dark-skinned pal "my assistant and my hairstylist and my best friend." She paused a bit before she added of her friend, "My pet f**king orangutan." Even though she appeared to be joking, people found it offensive with one saying, "God d**nit Latto. We were rooting for you."

Ari Lennox Tapped for At the Crib Fest

Ari Lennox Regrets Opening Herself Up to the World: It Has Only Damaged My Career