Netflix signs the lucrative contract to secure the global rights to distribute the Oscar winner's movie on the eve of its premiere at the Toronto International Film Festival in Canada.

AceShowbiz - Halle Berry has been left "speechless" after scoring a $20 million (£15.6 million) deal with Netflix chiefs to distribute her directorial debut, "Bruised".

The actress both stars in and directs the new drama, in which she portrays an embattled mixed martial arts fighter seeking redemption, and on the eve of its premiere at the Toronto International Film Festival in Canada on Saturday (September 12), Netflix bosses signed a lucrative contract to secure the global rights to the movie, which is screening as a work-in-progress, according to Deadline.

Taking to social media after the news emerged on Friday, Berry tweeted, "I am speechless. Thank you @netflix for believing in my vision, cannot wait for y'all to finally see #BruisedTheMovie." 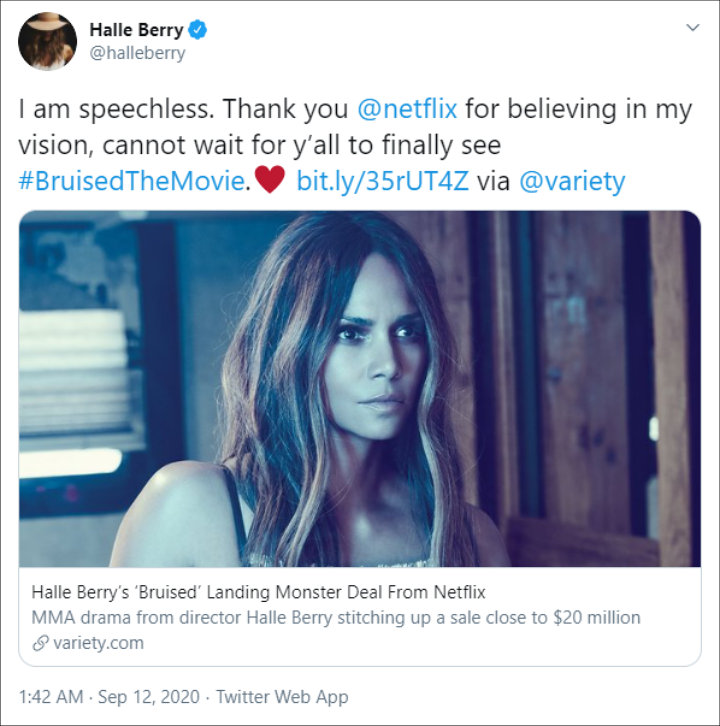 Halle Berry reacted to her $20 million deal with Netflix for 'Bruised'.
See also...

The Oscar winner recently revealed how she pushed through the pain of two broken ribs sustained on set to complete filming so as not to delay the production.

"I didn't want to stop because I had prepared for so long," she told Variety. "We had rehearsed; we were ready. So my mind, my director's mind, was just - keep going. And I compartmentalised that, and I just kept going: 'I'm not going to stop. I've come too far. I'm going to act as if this isn't hurting. I'm going to will myself through it.' And so we did."

An official release date for "Bruised" has yet to be set.