Kailyn isn't a fan of Chris Lopez's decision to trim Lux's hair without her permission, though Chris believes that 'if I decide to make a decision on my son or anybody, I can.'

AceShowbiz - "Teen Mom 2" star Kailyn Lowry was upset with ex and baby daddy Chris Lopez for cutting their son Lux's hair. While the drama should stay between the two, Kailyn's former co-star Jenelle Evans decided to insert herself into it.

Kailyn made it public that she wasn't a fan of Chris' decision to trim Lux's hair without her permission. Posting a "before" and "after" pictures of the back of the 3-year-old's head on Instagram Stories on Saturday, September 5, she wrote, "Parenting with a narcissist be like. Control tactic."

She further expressed her disappointment in an Instagram Live session. "I'm just at a place where it's like, 'OK, you could f**k with me all you want. You can choke me, you can put your hands on me, you can burn my book on social media, you can cheat on me. Do whatever you want, right? But the second you do something to my child, I'm gonna come out of character because you're using the child as a manipulation tool,' " she said.

In his defense, Chris explained on Instagram Live on his own page, "I've been wanting to cut my son's hair, so the fact that I cut off a little bit of his edges, she should be happy I didn't f***ing scalp his a**, all right?" He went on clapping back at Kail, "Let's be [on] some real s**t. That's my son, so if I decide to make a decision on my son or anybody, I can."

Jenelle, who has been feuding with Kailyn, apparently caught wind of the back-and-forth between the former couple. Weighing in on the matter, she tweeted on Monday, September 7, "I would have cut that little boy's hair too. Barbara agrees too."

"It's really sad to see when the mother is the difficult one and holds the child away from the father while co-parenting. You can hate the other parent all you want but they aren't going away like you want sooooo bad. #SorryNotSorry," Jenelle continued.

She added, "So please everyone.. just co-parent peacefully because no matter how much of a grudge you have against the father... theres nothing that will ever prevent them from visitation rights #Truth." 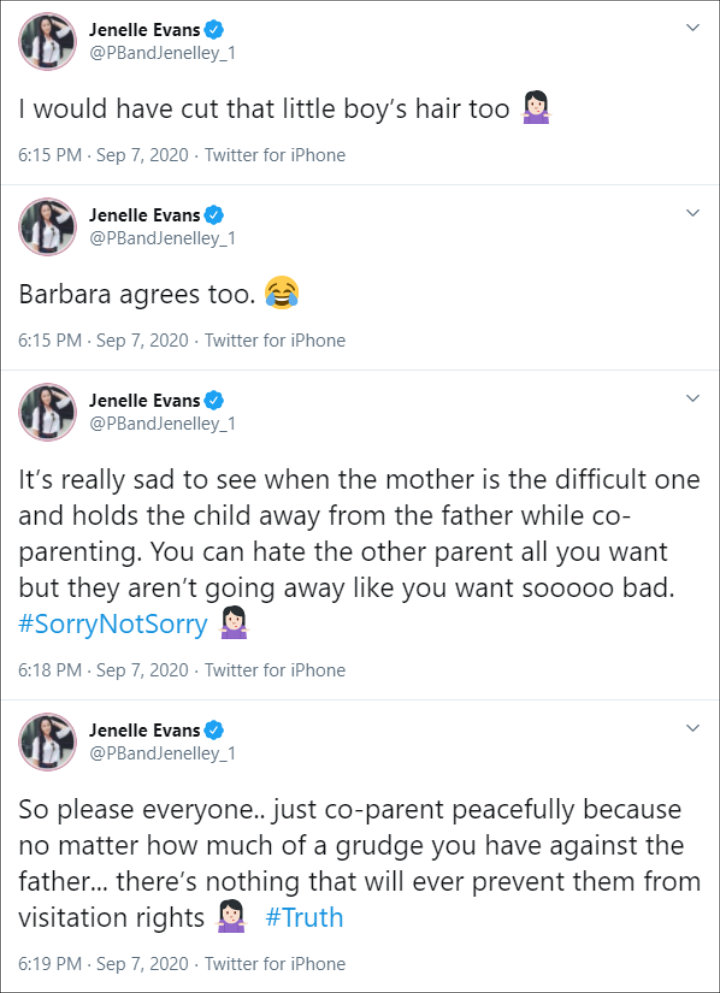 Kailyn seemingly responded to Jenelle's shades by sending her a DM on Instagram. "If I block you on Twitter... don't try sliding into my IG DMs and start to explain yourself," Jenelle wrote. "Anddddd if you don't want me commenting on your life.. don't comment on mine."