Kaia's mom Cindy Crawford also takes to Instagram to share a birthday shoutout to her daughter, posting a picture of young Kaia donning a princess dress and a crown.

AceShowbiz - Kaia Gerber turned 19 on Thursday, September 3 and she seemed to have a blast while celebrating the milestone. In honor of her birthday, the daughter of Cindy Crawford and Rande Gerber treated her Instagram followers to a nude picture of herself.

The black-and-white picture saw Kaia lying on the floor while wearing nothing but a pair of patent thigh-high boots. She also had a black star covering her nipple. "nineteen," Kaia simply captioned the racy photo, which was shot by photographers Luigi and Iango for the September issue of Vogue Japan. 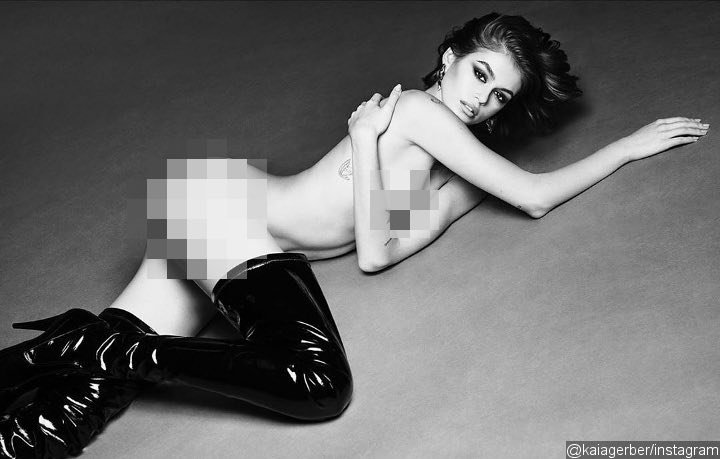 Kaia Gerber posted a nude picture on her 19th birthday.

That wasn't the only eyebrow-raising picture taken during her birthday. The catwalk star shared a plethora of photos with her fans, one of which featured her kissing friend Heather Sage Blair on the lips. Heather herself reposted the snap on her Instagram account and captioned it, "Birthday baby... je t'aimeeeee!!!"

Kaia's mom Cindy also took to the photo-sharing account to share a birthday shoutout to her daughter. Posting a picture of young Kaia donning a princess dress and a crown, she accompanied the snap with a sweet message.

"Happy birthday to my not so little princess!" the "Unzipped" star began her post. "Wishing you health and happiness and the confidence to be the highest version of yourself. So proud of the woman you are becoming!"

Her milestone aside, Kaia made headlines this week after she and "The Kissing Booth 2" star Jacob Elordi were photographed hanging out together at Nobu restaurant in Malibu, California, on Tuesday night. The pair were seen arriving at the restaurant at 9 P.M. and left two hours later.

For the outing, Kaia opted for a casual look in a black top, jeans and boots, as she carried her dog while wearing a mask. Meanwhile, Jacob wore a mask and sported a Bug's Bunny T-shirt, jeans and sneakers. They left together as they hopped on Jacob's Range Rover.

LightSkinKeisha Accused of Lying About Her Age While Celebrating Birthday