The 'Dr. Dolittle 2' star has since come under fire after telling Boyega to 'be grateful' for his 'Star Wars' role after the latter criticized the movie studio for using his black character as a token.

AceShowbiz - Michael Rapaport and John Boyega had a short back-and-forth on Twitter as the former weighed in on the latter's interview with GQ magazine. During the sit-down, the British actor criticized Disney for using his black character in "Star Wars" as a token and then pushing it aside, but the comedian thinks that Boyega shouldn't complain because he was lucky enough to have done so much more than other actors are able to.

"@JohnBoyega Yo my man you have done so much in such a short period of time. Congrats.. but you ain't the first actor to have an un nuanced character in a Star Wars movie #beniciodeltoro," the former "The War at Home" star tweeted on Wednesday, September 2 in response to Boyega's claims. He added, "Welcome to show business. S**t doesn't always go ur way."

Boyega caught wind of Rapaport's tweet and was unsure if the 50-year-old really understood what he said, so he asked, "Did you read the article ? Eyes thanks for the additional name to my list though." Rapaport responded, "Ya I read the article. That's why I tweeted u."

He then doubled down on his comment that "it's show business" and "things don't always work out the way YOU plan. Happens to ALL of Us." He reiterated, "Again be grateful for all u done so far which is a lot more than TONS of great actors of all races who also had roles cut down & will continue to."

Boyega, however, refused to take Rapaport's suggestion, writing back, "no. Thanks though," while adding a smile character. 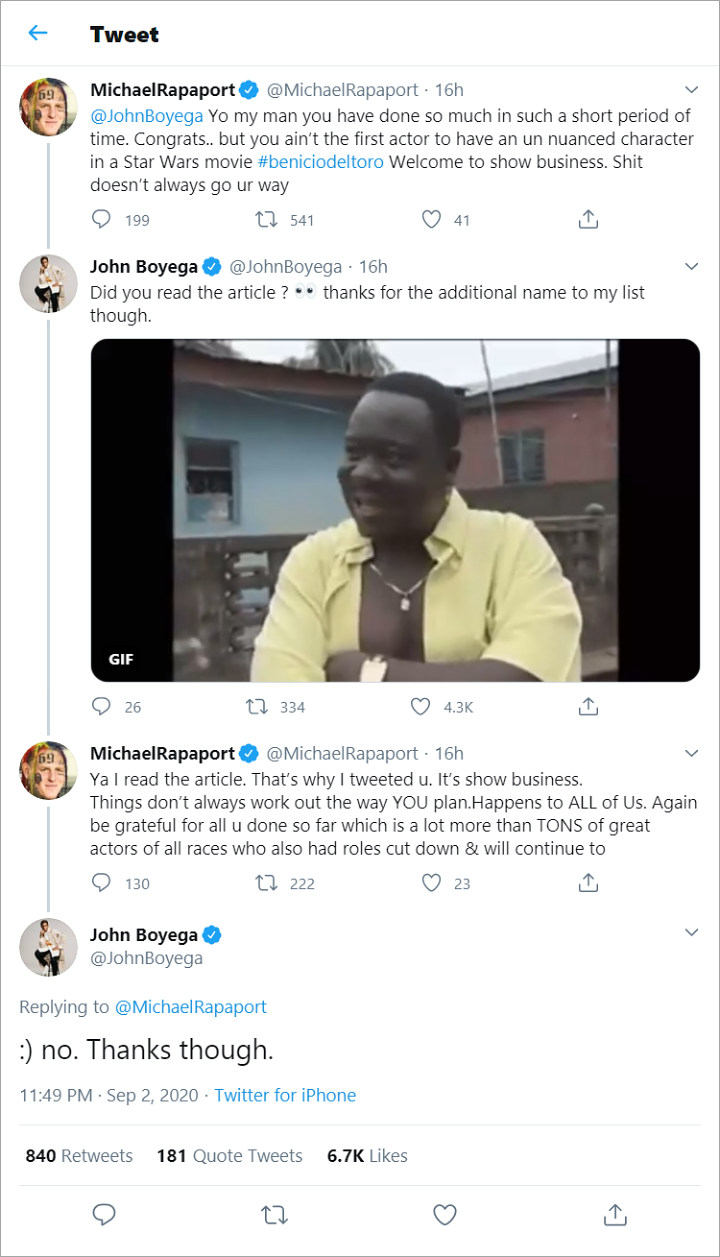 Michael Rapaport and John Boyega clashed on Twitter over the 'Star Wars' actor's complaint for Disney.

While their argument ended there, Rapaport has caught endless backlash from social media users who think that he, as a white actor, doesn't have the right to tell Boyega to be grateful for his "Star Wars" role. One person accused him of being racist, writing, "Please block that racist POS."

"Always saying the most! This is a pattern....Michael is a hinderance to our community," another called him out. A third user told Rapaport to shut up, "Being in Black films doesn't give you a pass - mind your business."

"not the NON-BLACK man telling you to 'be grateful' okay microaggressions. change starts with calling out the problem, not accepting it for what it is," another slammed Rapaport, before praising Boyega, "blackness is a key part to the problem. thank you for standing your ground-i applaud you."

In the said interview, Boyega aired out his displease with Disney for marketing the presence of a black character in the latest "Star Wars" trilogy but failing to bring Finn's story to a satisfying conclusion. "What I would say to Disney is do not bring out a black character, market them to be much more important in the franchise than they are and then have them pushed to the side. It's not good. I'll say it straight up," he said.

He continued, "So what do you want me to say? What they want you to say is, 'I enjoyed being a part of it. It was a great experience...' Nah, nah, nah. I'll take that deal when it's a great experience. They gave all the nuance to Adam Driver, all the nuance to Daisy Ridley. Let's be honest. Daisy knows this. Adam knows this. Everybody knows. I'm not exposing anything."

Michael Rapaport Unleashes on Kanye West Over His Antisemitic Remarks

Michael Rapaport Gets Snowballed While Ranting on Instagram Live: 'Shut the F**k Up!'