The drama between the podcast host and his ex Tahiry starts after the latter claims in an interview that Joe abused her when they were together, prompting Joe to call her a 'toxic liar.'

AceShowbiz - Cyn Santana has seemingly addressed the drama between her ex Joe Budden and his ex-girlfriend Tahiry Jose, who accused him of abuse. Taking to her Twitter account, Cyn appears to reveal that she isn't planning to insert herself in the feud and just continues minding her own business.

"Block all the noise out," so the "Love & Hip Hop: New York" alum wrote on the blue bird app on Wednesday, September 2, prompting fans to think that she wasn't bothered by Joe and Tahiry's beef. The attitude earned her a praise from one of her followers. 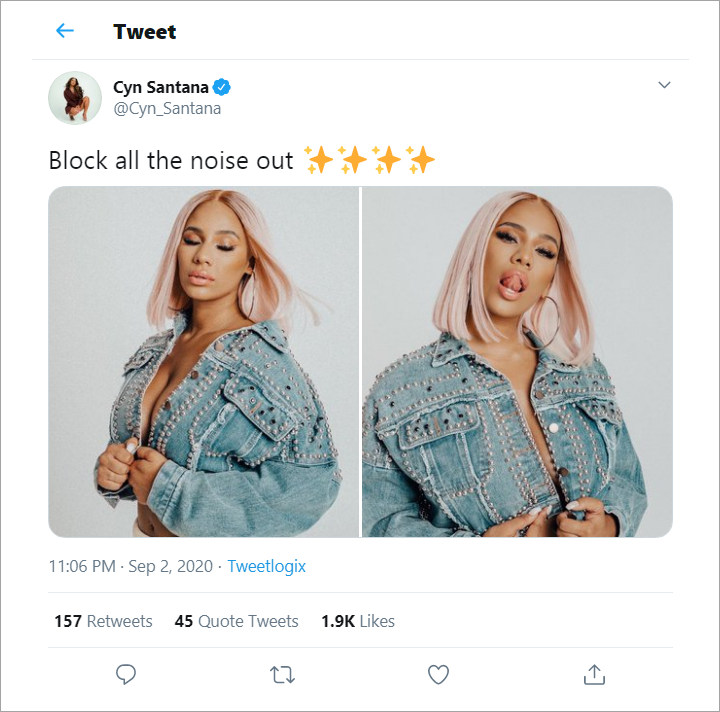 "I like how you mind your business and do your own thing," the fan wrote to Cyn. To that, she responded, "Oh Fa sho. Always....My business is my businesses my family and my son. Only thing getting this precious divine Libra energy."

Cyn, who split from ex-fiance Joe in 2019 after dating for almost three years, further emphasized the sentiment in a separate tweet. "There are people on this earth who are completely lost and will try everything in their power to take your light. All that lives in their soul is darkness. Move cautiously," she said. 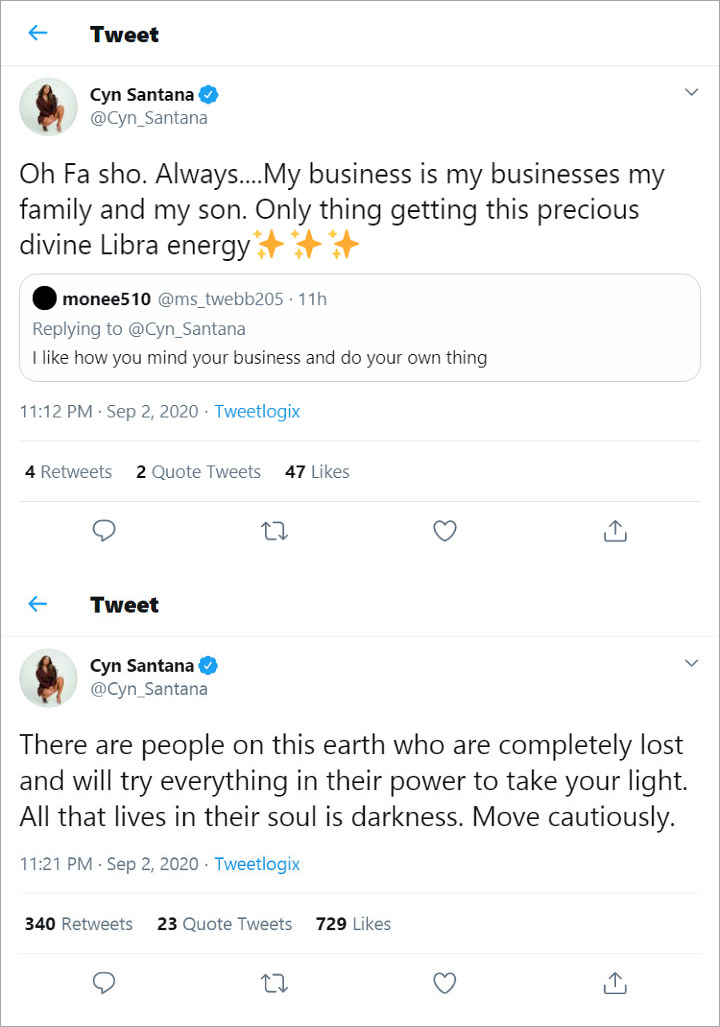 The drama between Joe and Tahiry started after the latter claimed in an interview with Hollywood Unlocked that Joe abused her when they were together. "I'm the oldest of 14. So, um, I think that the way I was dealing with being in a relationship with Joe was just tucking it, hiding it 'cause I can't stop," she said of handling the alleged abuse. "I have to keep going because people rely on me 'cause I have to handle stuff, 'cause I have to grow in this business, 'cause I'm not going to fold."

Detailing the abuse she allegedly suffered at the hands of "The Joe Budden Podcast" host, she added, "I've been beaten before. That relationship left me with a fractured rib and a broken nose because somebody was sending him a message. And I used to always say, 'Stop beefing out there, I'm still working.' And he hit me on that nose and then pushed me down a flight of stairs."

Joe, however, denied the allegations. "This young lady is a liar - a cancerous, toxic liar," he said in a recent episode of his popular podcast. "I'm uncertain why she's lying this way; I'm not certain if she is misspeaking ... if she has a false recollection of things. I'm not sure what it is but she said some things that didn't sit right with my soul and I'm here to talk about it."

"We were toxic," he admitted. "You used to beat my a**. You threw s**t. You hit me, you kicked me. You did a whole bunch of s**t that's not normal for a man to speak out about because it makes you appear less manly."

Jayda Cheaves Calls Lil Baby 'Cutest' for Giving Her 'Million Things' in a Day, Gets Ridiculed