The 'Hocus Pocus' actress fires back at Piers Morgan for demanding that Meghan is stripped off her royal title after the 'Suits' alum speaks on the importance of voting.

AceShowbiz - Hollywood celebrities have Meghan Markle's back after the Duchess of Sussex delivered a message about the upcoming U.S. election. During a virtual "When All Women Vote" event for Michelle Obama's When We All Vote initiative, the wife of Prince Harry urged people to vote and make a difference with their voice.

Meghan's message drew backlash from British citizens. Among them was the duchess' vocal critic, Piers Morgan, who demanded that she is stripped off her royal title. "The Queen must strip the Sussexes of their titles. They can't remain as royals & spout off about foreign elections in such a brazenly partisan way," the TV host tweeted.

Bette Midler quickly jumped in Meghan's defense, telling Piers to "f**k off." TV writer David Simon also clapped back at the outspoken TV presenter, writing in reply to Piers' tweet, "How about we strip you of your media platform and give it someone, anyone who has a solid fucking take on anything that matters in these life and times."

In another tweet, David defended Meghan as saying, "It's her country. It's a moral stand. F**k your royal a**kissery. F**k your rule book." He also explained Meghan's right to speak up about American politics, saying, "We just heard a fellow citizen talking politics, an American, back among Americans. We do that. You wanna get your a** in the air about your f**king titles, you can't ask us to take you seriously. We fought a war to lose that s**t." 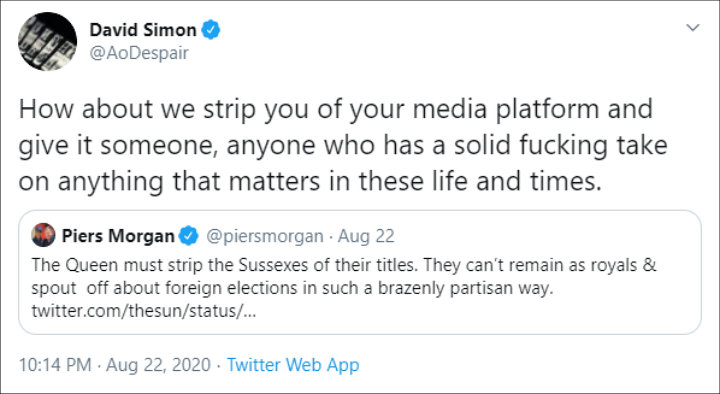 Piers didn't stay silence in the face of Meghan's supporters, writing back to David, "Pipe down you silly man. If Ms. Markle wants to make a real moral stand, I suggest she gives up her duchess title, and her father-in-law's money, and stands on her own two feet. Her shocking disrespect for the queen and the monarchy, and the royal 'rule book,' is outrageous."

He went on calling out David as writing, "The 'old broad' is Her Majesty The Queen, you disrespectful little twerp. She's been on the throne, serving the British people with dutiful dignity, class & empathy, for longer than you've been alive. So stick your impertinent Baltimore braggadocio where the sun don't shine." 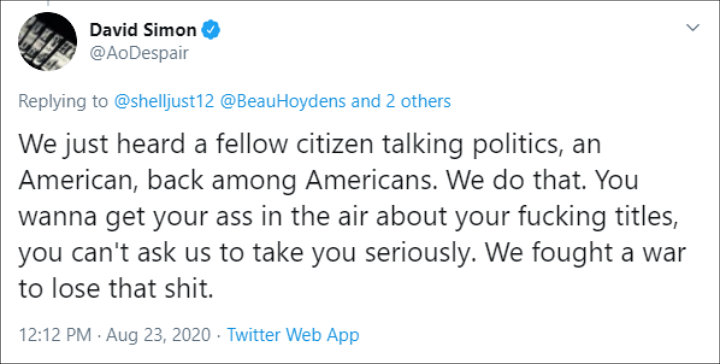 David responded to Piers' tweet again, "Tell the old broad to do what she feels. Playing hard with these two has worked wonders for the royal family so far." 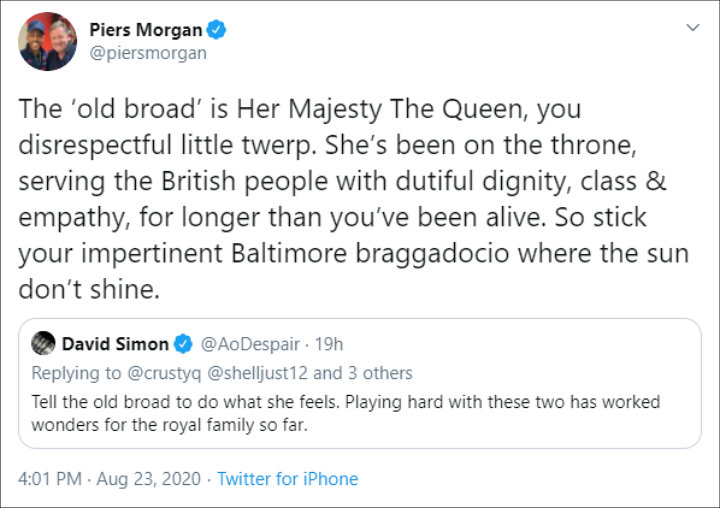 Dan Wootton, the executive editor of Britain's Sun tabloid, also criticized Meghan's political stance, which he deemed "completely inappropriate." He wrote, "Extraordinary! Meghan now actively campaigning against Donald Trump. Completely inappropriate and a massive diplomatic embarrassment for the Queen and British Royal Family, whose entire success and longevity is based on staying out of party politics."

To this, English actress Jameela Jamil, who resides in the U.S., responded, "I *THINK* they may be more embarrassed by their alleged resident pedo Andrew who was besties with a sex trafficker, than an American supporting women voting in her own country, and loosely referencing the importance of general democracy which is being threatened here currently." 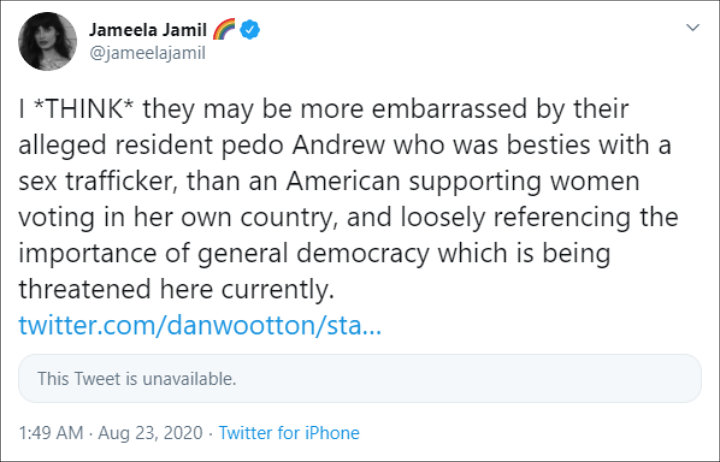 While taking part in the Thursday, August 20 "When All Women Vote" event, Meghan stressed the importance of voting. "At this juncture, if we aren't part of the solution, we're part of the problem," said "The Suits" alum. Urging women to mobilize and spoke out against complacency, she continued, "If you're complacent, you're complicit. We can make the difference in this election. And we will make the difference in this election. We vote to honor those who came before us and to protect those who will come after us."