The 23-year-old 'Chrisley Knows Best' star has taken to Instagram to open up about her health struggle, sharing that she was diagnosed with endometriosis when she was 18.

AceShowbiz - Savannah Chrisley is sharing her vulnerable side. Opening up about her health battle in a lengthy post she made on social media, the "Chrisley Knows Best" star revealed that she had been dealing with endometriosis for years and is preparing herself for a third surgery.

On Monday, August 17, the 23-year-old took to Instagram to share her story. "VULNERABLE MOMENT FOR MY LADIES: I haven't talked about this much because honestly...I have struggled BIG TIME," she began her post that featured a photo of herself holding up a brown map folder displaying "CENTER FOR ENDOMETRIOSIS CARE."

Dishing that she was first diagnosed with the disorder when she was 18, the TV personality shared, "I'm insanely self conscious and just feel like my body has given up on me. I was diagnosed with Endometriosis when I was 18 and it's been quite the struggle." She further admitted that "the pain at times was unbearable" and "the toll it took on her emotional/psychological health was pretty rough at times."

Savannah then noted, "Tomorrow I have my 3rd surgery. I have found a specialist in Atlanta and he is ONE OF A KIND!" The daughter of Todd Chrisley went on to tell her followers that she planned to share her experience post-surgery. "I will actually be posting a VLOG on this weeks experience in the coming weeks," so she promised.

The "Growing Up Chrisley" star additionally encouraged those who share similar health issues to speak up. "We're about to get REALLLL vulnerable ladies.... do you struggle with Endometriosis? I wanna hear your stories," she wrote, "let's help and inspire one another #endometriosis #endowarrior."

Savannah has since gained support from fellow stars. "The Bachelor" alum Tia Booth responded, "Thinking about you and praying, sugar!!!" Meanwhile, Kim Zolciak-Biermann's daughter Brielle Biermann simply stated, "Praying for you," and Brittany Aldean expressed her support by writing, "Good luck sweet girl! I had the same surgery makes all the difference!" 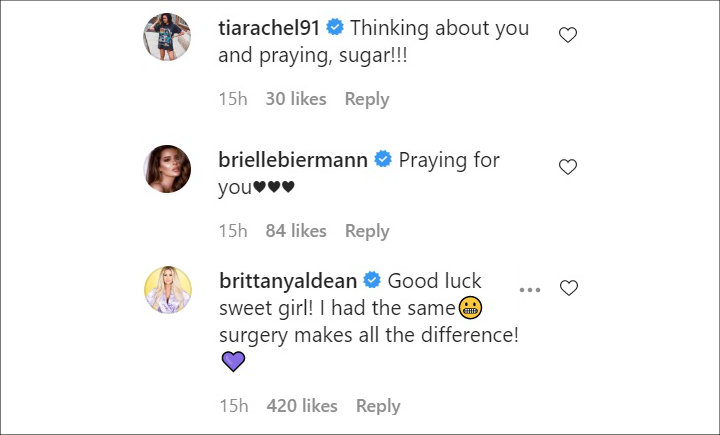 Savannah Chrisley received support from other celebrities on her endometriosis revelation post.

This was not the first time Savannah talked publicly about her health issue. Back in July, she detailed how endometriosis changed her life. "I was on a medication and the highest dose possible for six months, and I gained about 30 pounds within the six months," she told Life & Style. "I mean, it was hard... I would work out like crazy and try to eat right but there was nothing I could do to control it."

Malin Akerman Hopes to Do 'The Sleepover' Sequel With Ken Marino

'AGT': Kenan Thompson Tapped to Be Guest Judge While Simon Cowell Is Recovering From Back Surgery