While some people notice that the 'Aquaman' star's nipples are visible under her top, some others take issue with the fact that the actress takes a picture inside a mosque with someone praying behind her.

AceShowbiz - Amber Heard's visit to a mosque in Istanbul, Turkey has sparked a new controversy. While she documented her journey in the city in what seems to be an attempt to honor the city's culture and heritage, one of the actress' photos didn't sit well with Muslims.

In the said photo she posted on Instagram on Saturday, August 16, the blonde beauty posed in sunlight and seemingly near a mosque she just visited that day. Wearing a cream-colored top and loose linen jacket, she also donned a fuschia headscarf to respect the Muslim community.

In the caption, she expressed her delight over her trip. "Spent the day wandering around the magic of Istanbul's mosques and couldn't be more in love with this gorgeous city...," she wrote in the caption.

But eagle-eyed fans disapproved of Amber's outfit as they noticed that her nipples poked out from her loose top. Assuming that she wore the same outfit while visiting the mosques, people blasted her on Twitter for her inappropriate outfit.

"Amber Heard really did enter a Mosque in Istanbul with her nipples on show didn't she? The disrespect!" one person tweeted. Agreeing, a second user commented, "She honestly did. And I do not know how she did it, did nobody say anything to her?? Unbelievable the amount of disrespect she's showing the world."

"I'm so angry as a Muslim and the fact that she did that in MY country makes my blood boil even more," an enraged Muslim wrote. Another chimed in, "I am a Catholic and if I would visit a mosque and they ask me to cover myself I certainly would to respect your religion and habits. My point is, even if she is an atheist she should show respect and I honestly think she sadly has no respect for humans in general."

A fifth user explained, "Its place where humbleness is required to hv a spiritual experience , not insensitivity with ur nipples on display and without proper head and neck covering, its not damn photography session for sm b-grade magazine."

"I'm amazed that she wasn't turned away at the door!" another baffled person remarked, while someone else accused Amber of trying to get attention with the photo, "But this is what she does every time to get attention. She's not currently being greatly taken notice of in between cases so she gets her nipples out. It's classic of her."

While some people were enraged by Amber's outfit, some others took issue with the fact that she took a picture inside a mosque with someone praying behind her. The photo has since been removed, but that didn't stop the criticism from coming at her. 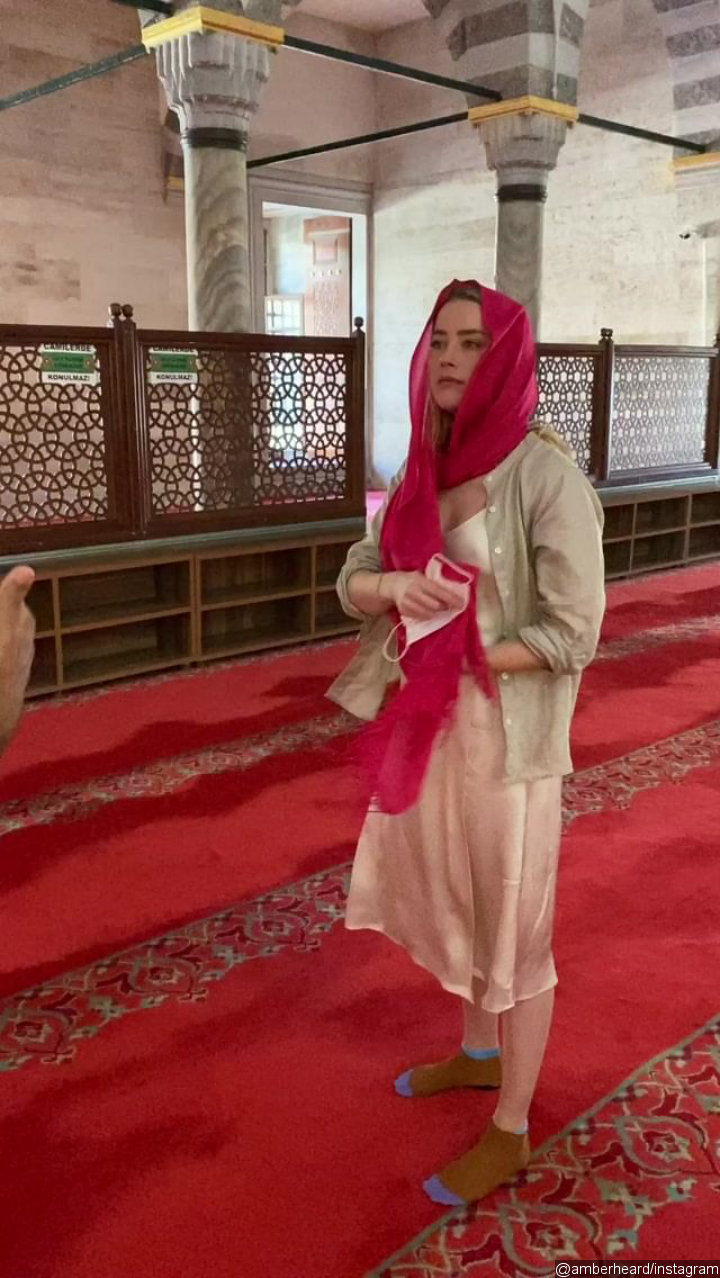 Amber Heard shared a video of her inside a mosque.

"That's a whole new level of disrespect to take a photo like that while someone is praying behind you," someone noted. Another said, "It's not allowed to make pictures of people during their ablution process inside of the mosque. Amber Heard pictures a man without his consent when he was praying. Or Amber Turd aka miss 'I am above the rules' thinks that it doesn't apply for her??"

Weighing in on the debate, Bernard O'Kane, a professor of Islamic art and architecture at American University in Cairo, said that cameras are allowed inside a mosque but should not be used during certain times. "Normally no problem, although it is usually discouraged during prayer time," he told The Washington Post.

"You should dress conservatively," he added. "Try not to go in shorts or tank tops. You should maintain decorum inside, so don't speak or laugh loudly. Other than that, there are very few restrictions."