The Brooklyn rapper was previously rumored being shot outside of the Elleven45 lounge in Atlanta, Georgia as a Twitter user claimed 'somebody shot Fivio Foreign down the street from where' his/her sister lives.

AceShowbiz - Brooklyn rapper Fivio Foreign thankfully is safe after it was reported that he was shot in Atlanta on Saturday, August 8. Amid the death scare, the rising star took to his social media accounts to update fans about his well-being, assuring them that he's "fine."

Further assuring fans that Fivio was OK, fellow New York rapper Rah Swish posted on Instagram, "Fivio not shot or injured or was shot at. Had nothing to do with that situation."

However, it was when Fivio shared a video from restaurant that fans could really breathe a sigh of relief. The video saw him and his crew enjoying a meal together.

Later that night, the rapper doubled down on the assurance by writing a message on Twitter. "Thanx all my demons for bein concerned bout me.. I'm fine.. I don't stay safe I stay Dangerous & I move around w God !Trust me I'm good," so he said. 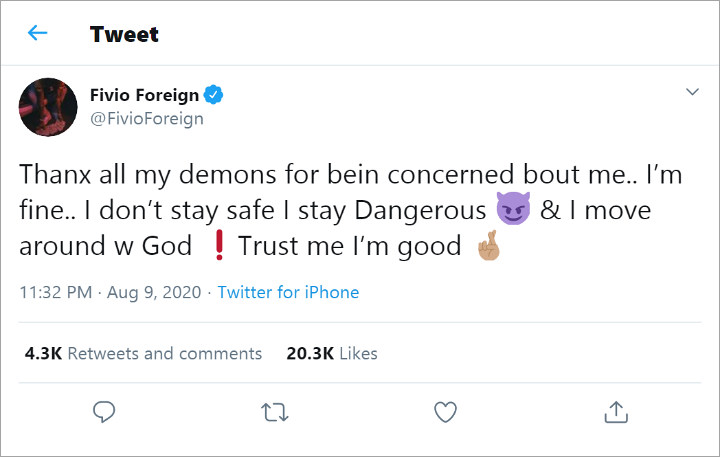 Fivio was previously rumored being shot outside of the Elleven45 lounge in Atlanta, Georgia. "My sister in ATL tellin' me she can't get to her crib bc somebody shot Fivio Foreign down the street from where she live & the streets blocked off," a Twitter user by the name of @benjifrmthewest wrote.

Further fueling the speculations, footage that was allegedly from the scene found its way out online. "Prayers up for Fivio Foreign after he was reportedly shot in Atlanta," an Internet user wrote alongside the video. Fans were concerned after reports about Fivio's potential death hit the web as many noted that Fivio was close with Pop Smoke, who was tragically murdered earlier this year.