The two members of The Nolans have been diagnosed with incurable cancer in her liver and stage three breast cancer respectively after filming their Quest Red show 'The Nolans Go Cruising'.

Linda, 61, has incurable cancer in her liver, after previously fighting breast cancer in 2006, cellulitis and lymphoedema in her arm in 2007 and secondary cancer on her pelvis in 2017.

A spokesperson for Linda and Anne told Britain's Daily Mirror newspaper in a statement, "It is with a heavy heart to confirm that Linda and Anne are battling cancer together. Linda's incurable secondary cancer has spread from her hip to her liver, with Anne having a grade three breast tumour."

"They were both diagnosed following filming of their Quest Red show 'The Nolans Go Cruising' and are now undergoing chemotherapy together. Linda and Anne would like to thank the public for all the love and support they've received."

The siblings have had the first installment of their chemotherapy treatments, and will each have six in total. They've both lost their hair. 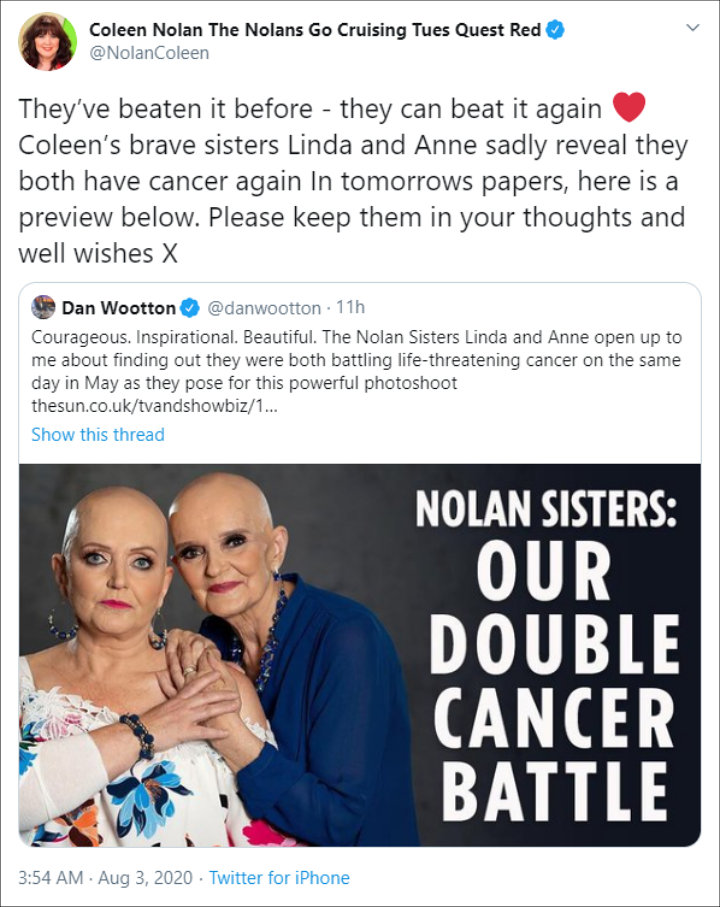 A representative of Coleen Nolan has issued a statement about Linda and Anne's cancer diagnoses.

Following news of their diagnoses, Linda and Anne's sister Coleen Nolan's management took to Twitter to thank fans for their kind words, writing, "They've beaten it before - they can beat it again. Please keep them in your thoughts and well wishes X."