While 'The Bones' singer, who welcomed son Hayes Andrew with husband Ryan Hurd four months ago, looks extremely stunning in two Instagram pictures, one user apparently finds a flaw to be used to taunt her.

AceShowbiz - Maren Morris is not here for your slander. The country singer had a fiery response to an online troll who is coming at her nursing mom's cleavage in her recent post on her Instagram account.

The said post, which she shared with her Instagram followers on Tuesday, July 21, featured two selfies of herself rocking wavy hair. She paired it with gold eye makeup while she donned a light blue top that displayed her cleavage.

While "The Bones" singer, who welcomed son Hayes Andrew with husband Ryan Hurd four months ago, looked extremely stunning in the pictures, one user apparently found a flaw to be used to taunt her. "Wavy hair as the camera is only on your t**s . Yes it's distasteful for sure," so the naysayer wrote in the comment section.

Not enough, the person continued, "Come on if your caption reads wavy hair maybe keep the focus on the hair, or perhaps make the caption big boobs ? Just saying like holy cow. Everything in this world doesn't make sense anymore , clearly these littles don't have much to look up to either."

Maren caught wind of the comment and didn't plan to let the person have the last laugh. "Girl BYE," the 30-year-old wrote back. "Don't let my boobs knock you on the way out," she continued, adding a laughing-and-crying face emoji and a waving hand emoji.

She doubled down on her comment on Twitter. "Mom boobs for life. If you're offended, sign off," she tweeted. She added in a separate post, "Sorry I've been wearing a nursing bra and sweatpants for 4 months and decided to get dressed up." 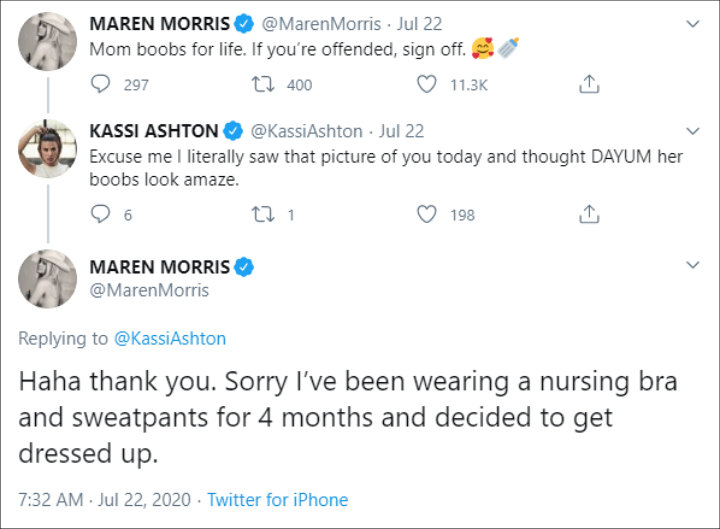 Maren Morris is proud of her 'mom boobs.'

Her husband also chimed in, writing a playful comment in which he praised her for her "great hair." To that, Maren replied, "I knew you'd notice." Her friend Karina Argow, meanwhile, joked, "Let's get a motorboat out on those wavesssss." In her reply, the singer said that "these are temporary," before adding, "Yours are for lyfe."