The 'RHOBH' alum shuts down the claims in a Twitter post while offering her receipt after the 'American Crime Story' star said in two different occasions that Lisa 'was not nice' to her at a party.

AceShowbiz - Lisa Vanderpump is hitting back at Sarah Paulson over her shady jab at her when she said in two different occasions that the former "The Real Housewives of Beverly Hills" star "was not nice" to her when she met her at a party. Now, Lisa shuts down the claims in a Twitter post while offering her receipt.

"Apparently @MsSarahPaulson you are with me holding my precious lil giggy," Lisa wrote on Tuesday, July 14 alongside a screenshot of 2019 tweet featuring a picture of her with the "American Horror Story" actress who was holding Lisa's puppy. "I rarely let anybody hold him as he is so delicate,you must be friendly with one of those mean girls. I have no reason to be anything but kind to you."

"She's not worth a response Lisa. She's friends with this...," a fan replied to her tweet featuring Harry Hamlin wearing a Nazy T-shirt. "Yikes,yep probably...how disgusting,my beloved grandmothers house was bombed by nazis ...geez," Lisa responded. 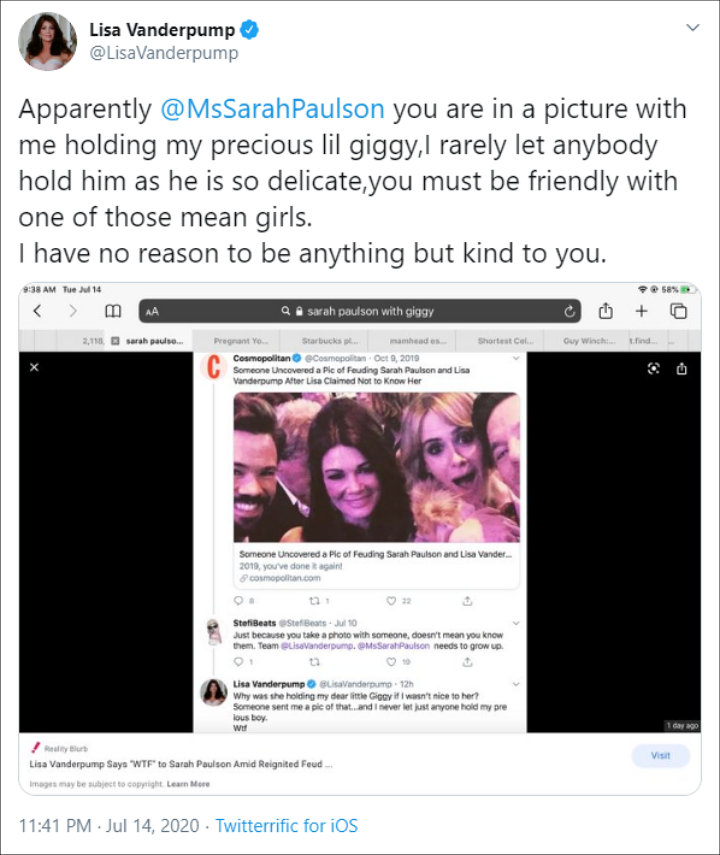 Lisa Vanderpump hits back at Sarah Paulson's claims about her being not nice to her.
See also...

Sarah first claimed that Lisa wasn't nice to her during a "Lie Detector Test" video she filmed for Vanity Fair in October 2019. When asked if she would miss LVP following her exit from the Bravo reality show, the actress said, "I don't want her coming after me on Twitter, but I won't miss her. I miss the dynamic she brings to the group -- which is, you know, the fear of God she instills in everyone. But no, I won't miss her."

Sarah doubled down on the statement during her appearance on "Watch What Happens Live with Andy Cohen" on July 9. "I mean, Andy, it's that thing where I'm a bit of an idiot in the sense that I was having that lie detector test," she told the host. "They truly strapped everything around me. The guy was sitting there. I somehow felt that if I didn't answer the question properly I was going to get called out anyway! Listen, bless the fans. Bless the people who have [Lisa's] back. That's great."

Lisa Vanderpump's Daughter 'Thrilled' to Be Pregnant With First Child