Responding to people who accuse her of being a pedophile because she deleted more than 28,000 tweets over night, Chrissy says, 'I cannot f**king STAND you idiots anymore and I'm worried for my family.'

AceShowbiz - Chrissy Teigen usually has witty responses when it comes to dealing with trolls online, but it appears she has her limit too. The cookbook author went off on social media after being accused of pedophilia.

It all happened amid the pedophilia case that Ghislaine Maxwell and Jeffrey Epstein have to face right now. People pointed out that ever since the case was brought to light, Chrissy had deleted more than 28,000 tweets and this raised people's suspicion. As someone who is usually very active online, she naturally caught wind of it and immediately hit back.

Explaining the real reason for her recent social media move, the "Lip Sync Battle" co-host noted, "I actually deleted 60,000 tweets because I cannot f**king STAND you idiots anymore and I'm worried for my family. Finding me talking about toddlers and tiaras in 2013 and thinking you're some sort of fucking operative." She elaborated, "F**king detectives that can't even do simple subtraction to see how much was deleted. That's who we are working with here." 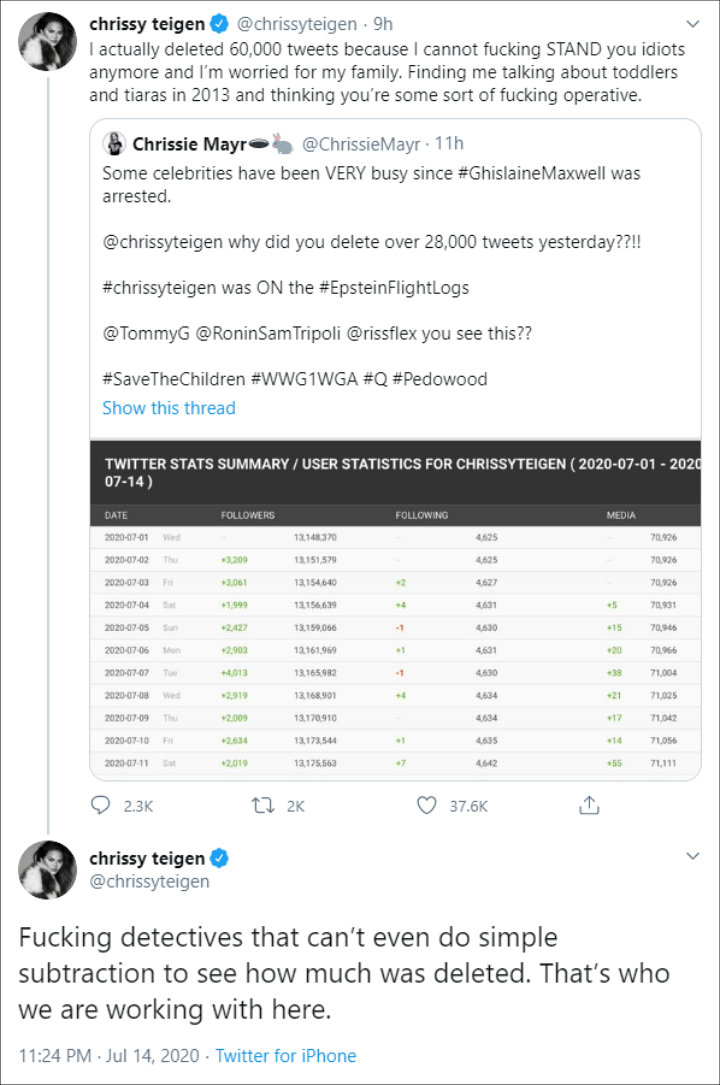 Chrissy was referring to her tweet in 2013 that found her saying, "Seeing little girls do the splits half naked is just… I want to put myself in jail. #toddlersandtiaras."

Even though Chrissy had offered an explanation, the accusation didn't stop. When one person admitted to finding it weird that the model was being "defensive," she responded, "this I don't get. everyone thinking I'm guilty because I'm defensive. You understand you are calling me a pedophile, correct?" She later called them "losers." 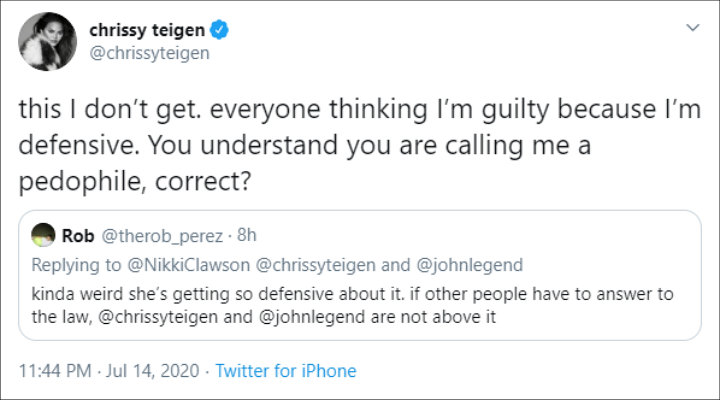 In another tweet, Chrissy appeared to have given up defending herself because in her opinion, people will still accuse her of pedophilia no matter how many times she debunked it. She said on the micro-blogging site, "when pedo ghislaine sings like a canary (if she doesn't die) and we have nothing to do eith this, I know for a fact it won't go away. They'll just think of another excuse. It is extremely disheartening. I don't know how to stop this. i don't think anyone quite gets it."

Chrissy Teigen Has Daughter's Hand-Drawn Butterfly Tattooed on Her Arm