Masika Kalysha Backtracks on Tweet Gushing Over Michael B. Jordan: 'I Don't Want That Man'

The 'Love and Hip Hop: Hollywood' alum sets the record straight that she isn't serious when she says she wants to have an entanglement with the 'Creed' star, tweeting, 'I don't want that man. I was joking.'

AceShowbiz - Masika Kalysha appeared to be shooting her shot at actor Michael B. Jordan in her recent post on her Twitter account. However, it seemed like she was met with trolling, prompting her to have a change of heart about the "Black Panther" star.

"Y'all… be a doll and go tell Michael B Jordan we got some entangling to do," so she wrote on the blue bird app on Saturday, July 11. It seemed like the former "Love & Hip Hop: Hollywood" star was referring to Jada Pinkett Smith's headline-making "entanglement" with singer August Alsina when she was on a break with Will Smith.

Masika Kalysha shot her shot at Michael B. Jordan.

Fans quickly reacted to Masika's tweet in which she hinted at being attracted to Michael. "You & #hotgirlmeg want that #creed.. #entanglement is what yall a call it," a fan wrote to Masika, referencing Megan Thee Stallion's flirty interaction with the actor. "Sharing is caring," Masika replied. 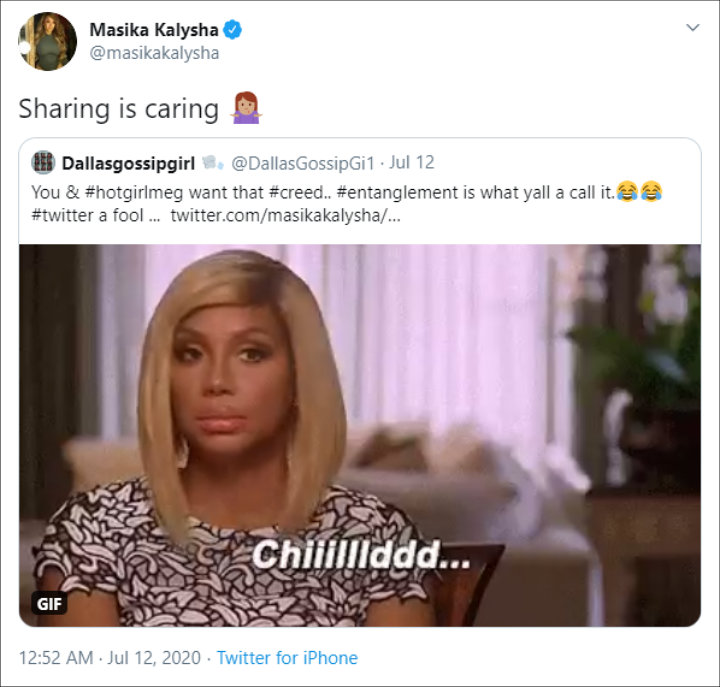 Masika responded to a fan's trolling.

Another fan suggested the TV star to "go after Key Glock or somebody else who fine chile," to which she responded, "1st of all I don't go after any man... I never have... let me shoot my very 1st shot in public in peace and stop goal tending damn it. I'm tryna set a clear path to my DM's for this man."

Later, Masika set the record straight that she wasn't serious when she said she wanted to have an entanglement with the "Creed" star. "I don't want that man. I was joking. I just think he's beautiful. Calm tf down," she explained on Sunday.

She said she wasn't serious about her wanting to have some engtanglement with Michael.

"Lol uh-uh sis. Don't even take it back. You might de-manifest him out of your DMs. If there's fun to be had then have that s**t lmao. F**k these people. All of us ain't hating. Some of us ready to live vicariously through your Instagram stories," a fan replied. Meanwhile, someone else said, "U can want him sis he is beautiful we all want him."