One day after revealing that her relative had a very large firework explode in his face during an Independence Day celebration, the former 'Rizzoli and Isles' star thanks fans for prayer and support.

AceShowbiz - Actress Angie Harmon is asking fans to pray for her family after the husband of a cousin was injured in a fireworks accident on America's Independence Day.

The former "Rizzoli & Isles" star took to Twitter on Sunday, July 5 to plead with followers for support, detailing the events of the drama the night before.

"I know that Twitter is not a platform for love or prayer But I need anyone out there who is reading this to please pray for my dear family in Christ who has had a horrible accident," she posted on the social media platform. "Just got word that my cousins (sic) husband had a very large firework explode in his face last night (sic). Much of his face was blown off."

The 47-year-old added that he was airlifted to a hospital in Augusta, Georgia and was given "almost no chance of survival." 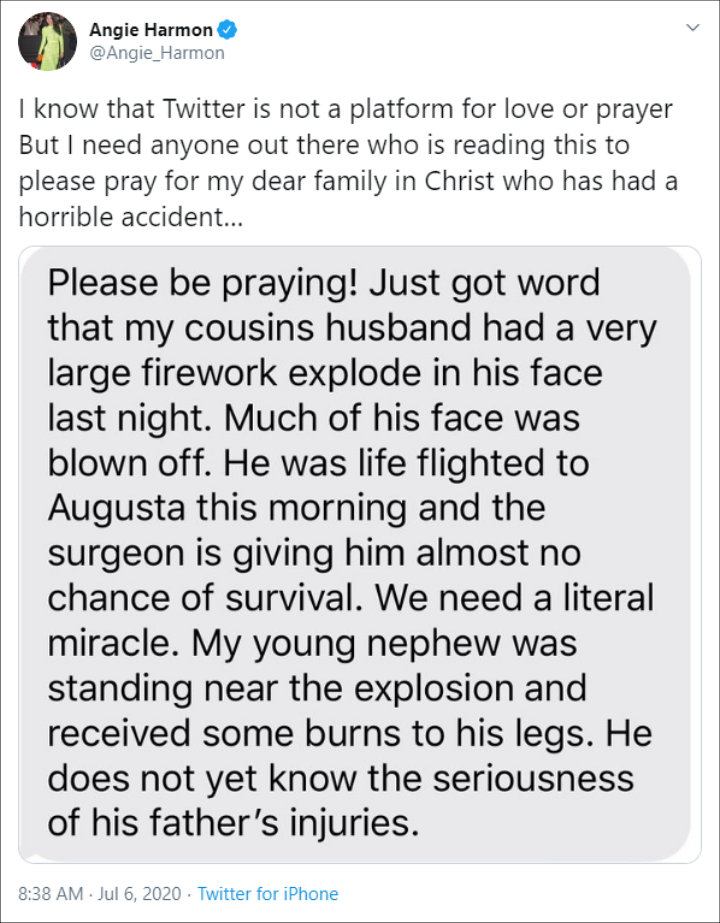 Angie Harmon pleaded for prayers after the husband of her cousin got injured in a firework accident.

On Monday, July 6, she added that there has been some progress, despite the severity of his injuries.

"The specialists are cautiously optimistic," she added. "He is by no means close to out of the woods. In an induced coma. Has definitely completely lost one eye. May or may not have sight in the other. Hopefully will be able to start reconstructive surgery in the morning."

She concluded by thanking her fans for their continued support, adding "THANK YOU FOR YOUR PRAYERS... if I could hug each & every one of you I would."