Noname Rejects J. Cole's 'Leader' Label on Her: I'm Not a Leader

The raptress urges her followers to unfollow her if they are brought to her account by J. Cole, who raps about her in his controversial song, 'Snow On Tha Bluff'.

AceShowbiz - Noname apparently resents the "leader" label that J. Cole puts on her. Taking to her Twitter account, the raptress urged her followers to unfollow her if they were brought to her account by J. Cole, who rapped about Noname in his controversial song, "Snow on tha Bluff".

"i need to this account lol," so Noname tweeted on Sunday, July 5. In a separate tweet, which has since been deleted, she added, "if cole brought you here because 'she's a leader in these times' unfollow me. i'm not a f***ing leader. im a confused n***a reading difficult books trying to understand this s**t like everyone else." 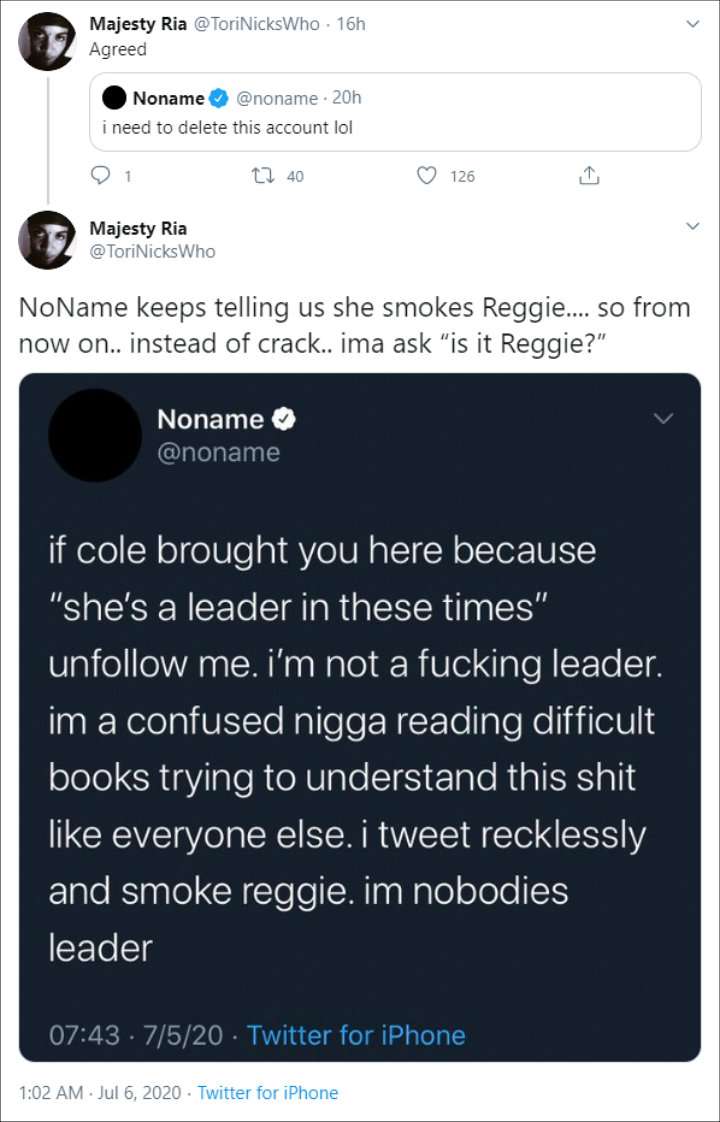 Noname refused to be called a 'leader.'
See also...

J. Cole appeared to call out Noname on "Snow on tha Bluff", which was released on Tuesday, June 16, for recently calling out her peers over their social media silence following the death of George Floyd at the hands of a white police officer in Minnesota in May.

"She mad at the celebrities, low key I be thinkin' she talking bout me," he raps, before later adding, "But s**t, it's something about the queen tone that's botherin' me."

Additionally, J. Cole tweeted, "Follow @noname," after releasing the track. Later, he also added, "I love and honor her as a leader in these times."

Noname responded to J. Cole on her song titled "Song 33" in which the Chicago musician raps, "He really bout to write about me/ When the world is in smokes?" However, Noname then apologized for engaging in the back-and-forth when there are real issues out there.

J. Cole Defends Himself as Chance the Rapper Slams Him for Seemingly Dissing Noname Over BLM