The 'Hidden Figures' actress also notes that misogyny doesn't only happen in entertainment as it occurs in 'boardrooms, the WH, households, corporate spaces, army' and church.

"Women (black women inparticular) have been betrayed by the majority of men for far too long . The systems that enable Patriarchy and abusers of power are burning . Either bring gasoline or burn with them," she began her Twitter tirade on Friday, July 3.

The "Make Me Feel" songstress noted that people "can't wait to call women every b***h , h** , discuss violent acts against women, etc for clout in rap, rock, and through out music history." She added, "Misogny has NEVER been okay yet it has become normalized. Women didn't create misogny, y'all did. SO YOU DO THE WORK to ABOLISH IT."

The "Hidden Figures" actress then shared that misogyny doesn't only happen in entertainment as it occurs in "boardrooms, the WH, households, corporate spaces, army, church, let's us all know ya'll do not care about women on a human to human level and you never have. If you did it would have been ABOLISHED centuries ago. You had time."

Concluding her rant, Janelle wrote to her followers, "A lot of my musical heroes and peers' Work are problematic in many ways . And I just might be a problematic hero to someone." 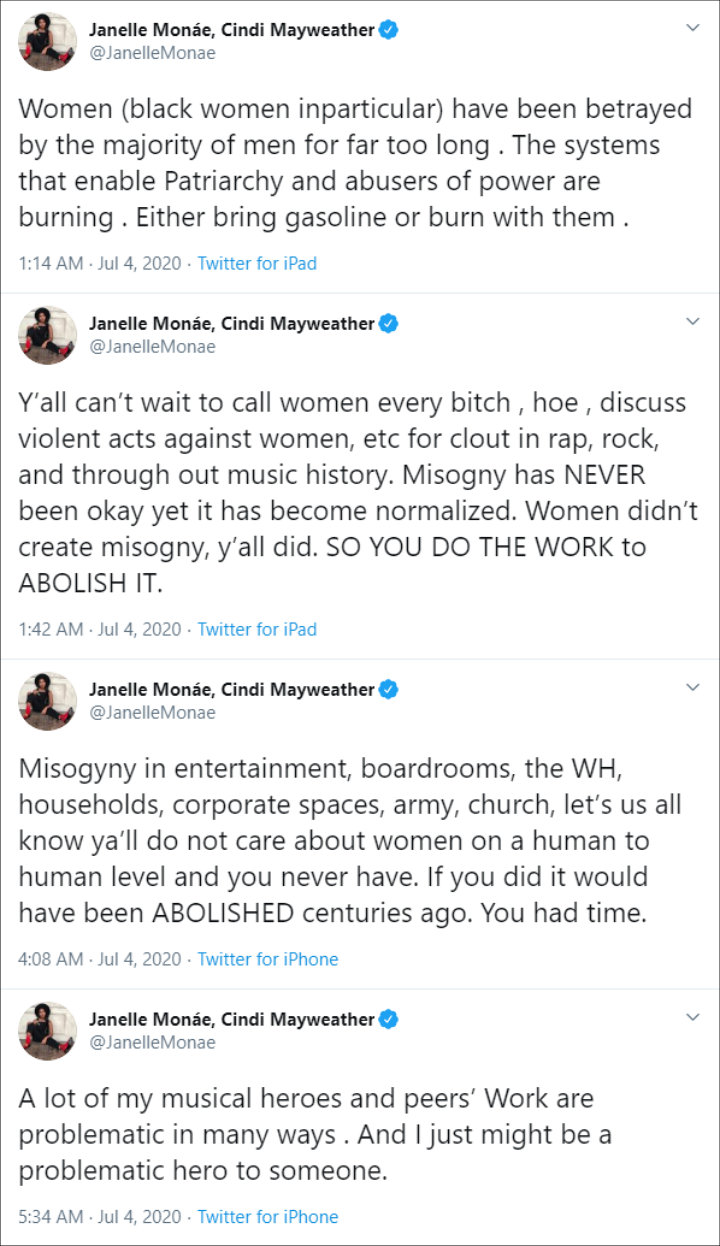 This arrives after she opened up about how "triggering" it was to film her upcoming horror film "Antebellum". Talking about her role, which is an author who is transported back in time to a reality in which she is an enslaved person, Janelle said, "Oh, I brought all of my ancestors home with me. We were filming most of the stuff at night on a plantation, and I felt everything. There were just certain conversations even at craft services that if I heard would be triggering for me."

"This is a project that is so of the times, and it was not going to be a yes for me because I knew the responsibility and the weight of it and I knew what this character was going to have to go through physically and emotionally," she went on to add during the Hollywood Reporter Drama Actress Roundtable.