AceShowbiz - Guns N' Roses singer Axl Rose took to Twitter to call out Surgeon General Jerome Adams after he seemed to avoid telling Americans to avoid large 4th of July gatherings amidst the COVID-19 outbreak during an interview. In his tweet, Axl called for Jerome's resignation.

"Jerome Adams is a: A coward b: A POS [piece of s**t] c: Both," so the singer wrote on Friday, July 3. He then asked Jerome to "resign," adding, "U don't deserve the job or title. America deserves better." 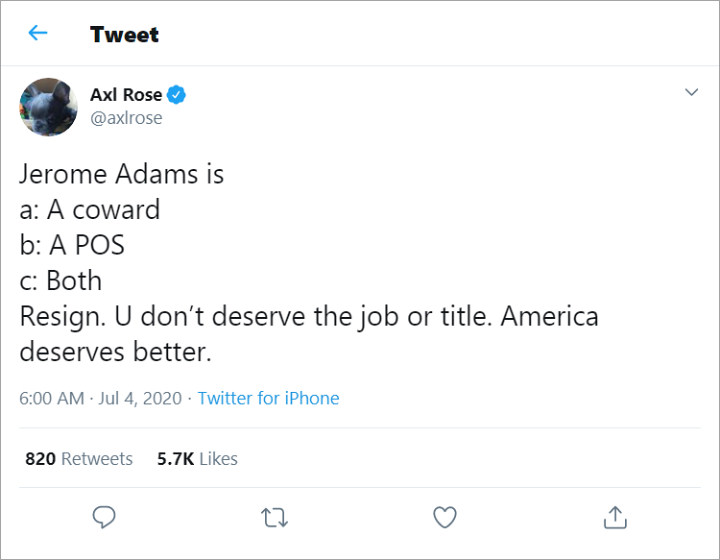 The criticism came after the surgeon general made an appearance in an interview with "Today" show's anchor Craig Melvin. When asked about advise for Americans ahead of large events for the big day, Jerome responded, "As we go into this 4th of July weekend, it's important that everyone remember my Surgeon General's prescription for staying safe from Coronavirus."

"1. Know your risk. We know that people who are older and people who have chronic medical conditions, such as diabetes, obesity, and high blood pressure are at higher risk for Coronavirus. If you're at higher risk, stay at home," he went on to explain.

He added, "Number 2. Understand your circumstances. Are you in a community where spread is up or down? Are you going to a place where you can social distance or not? Are you going to a place to where you’re inside or outside? We know the risk for outside is lower risk than inside." But then, he was cut off by Craig who asked, "But Dr. Adams -- with all due respect…we know large gatherings presents the biggest right now. Would you advise someone to go to a big gathering right now? Yes, or no?"

"Well it's not a yes or a no, every single person has to make up their own mind. They're going to people going to beaches and going to BBQs…they have to look at their individual risk. As you mentioned, CDC mentioned larger gatherings are higher risk," Jeremy answered.

"You have to take that into account again, with whether or not you're at risk. Whether or not you live with someone who is vulnerable. And you have to take measures to stay safe," he continued. "The most important thing: please wear a face covering. If we all wear these, we will have more independence and more freedom. More places will be able to stay open and we'll have less spread of the disease."