The YouTube personality also announces that she is no longer affiliated with Baddie B Lashes brand, encouraging other beauty influencers to do the same as her.

AceShowbiz - Jackie Aina is no longer working with beauty retail Morphe. The beauty guru has recently announced that she'd no longer affiliated with the company as it continues to sell products of what she deemed "antiblack racist" beauty brands.

On Thursday, July 2, Jackie wrote on her Twitter account, "hey boos, as some of you may know as of this week I will no longer be a @MorpheBrushes affiliate. code 'EDGES' has deactivated. I refuse to align myself with a company that continues to retail antiblack racist beauty brands. I strongly encourage other influencers to do the same!"

Morphe isn't the only brand that Jackie cut ties with. In another tweet, she announced that she is no longer affiliated with Baddie B Lashes. "as of June I am also no longer a Baddie B Lashes affiliate. Code EDGES has been deactivated. If either of these codes still work please let me know and I can follow through to make sure they are fully deactivated. Thank you," so she wrote on the blue bird site. 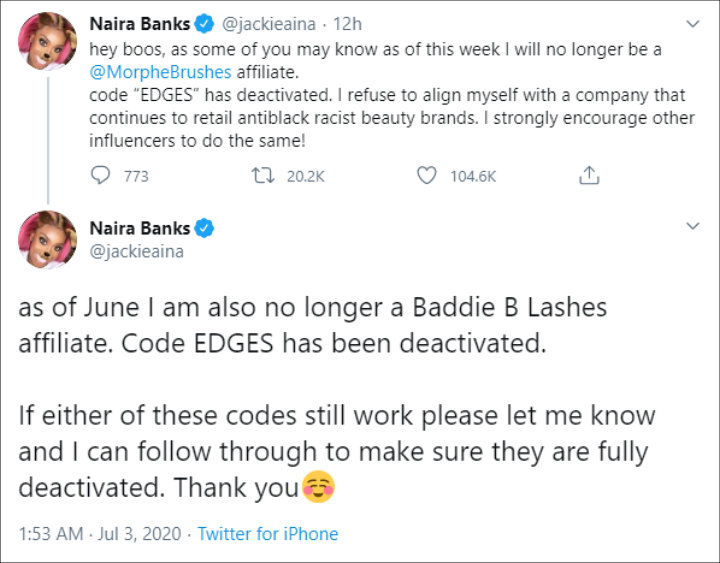 Jackie isn't the first public figure to cut ties with a company over racism. Back in 2018, The Weeknd announced that he had ended his partnership with H&M after the fashion brand posted a photo of a black child modeling a hoodie that said, "Coolest Monkey in the Jungle". He wrote on Twitter at the time, "woke up this morning shocked and embarrassed by this photo. i'm deeply offended and will not be working with @hm anymore…"

G-Eazy made the same decision. Taking to Twitter, he revealed that he terminated his contract with the brand. "I can't allow for my name and brand to be associated with a company that could let this happen. I hope that this situation will serve as the wakeup call that H&M and other companies need to get on track and become racially and culturally aware, as well as more diverse at every level," he said.