The former F1 boss claims 'in lots of cases, black people are more racist than white people,' while praising the British racing driver's effort to help increase diversity in motorsport.

AceShowbiz - Lewis Hamilton has blasted Bernie Ecclestone over the latter's bizarre comments about racism. The former chief executive of the Formula One Group was weighing in on the British racing driver's effort to help increase diversity in motorsport when he claimed that "in lots of cases, black people are more racist than white people."

Lewis, who is the only black driver in the history of the sport, found Bernie's remarks unacceptable. Taking to his Instagram Stories, he voiced his disagreement as writing, "So sad and disappointing to read these comments." He continued, "Bernie is out of the sport and a different generation but this is exactly what is wrong - ignorant and uneducated comments which show us how far we as a society need to go before real equality can happen."

Finding Bernie's "lack of understanding" to be the root of issue that caused the lack of diversity in the sport, the six-time Formula One World Champion mused, "It makes complete sense to me now that nothing was said or done to make out sport more diverse or to address the racial abuse I received throughout my career."

The 35-year-old went on declaring, "Now the time has come for change. I will not stop pushing to create an inclusive future for our sport with equal opportunity for all. To create a world that provides equal opportunity for minorities." He added, "I will continue to use my voice to represent those that don't have one, and to speak for those who are underrepresented to provide an opportunity to have a chance in our sport." 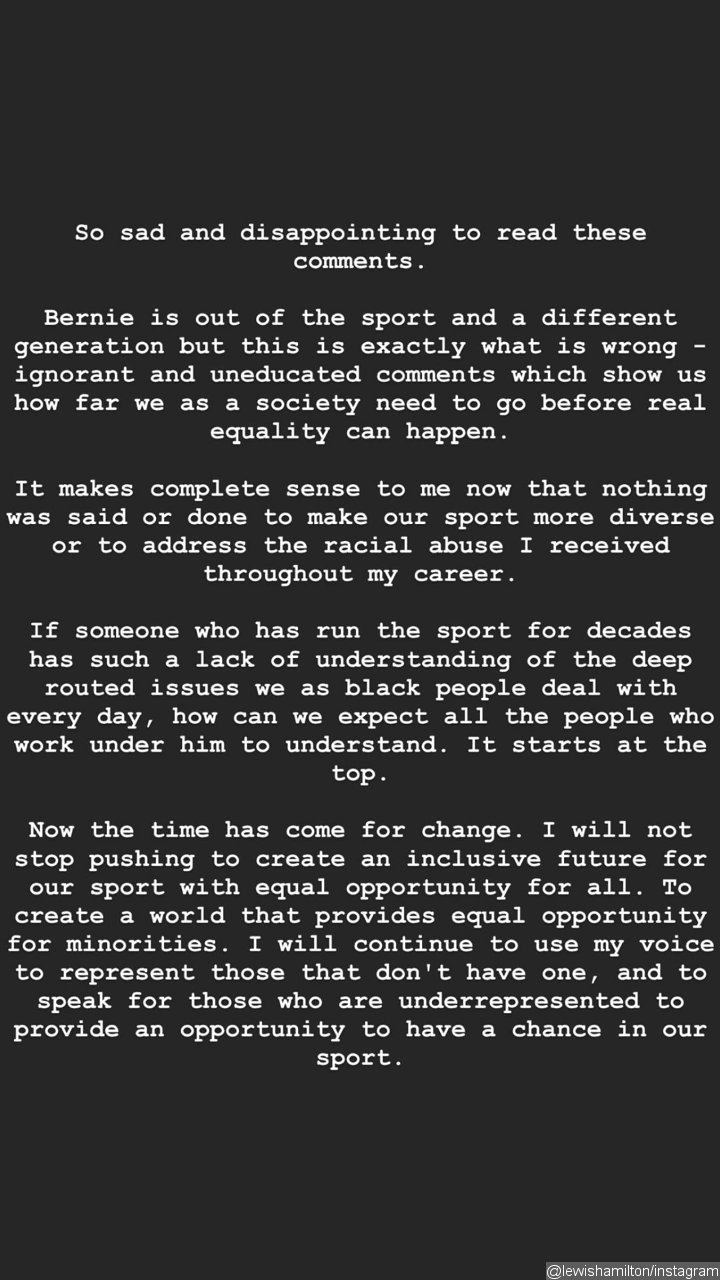 F1 has also condemned Bernie for his comments, saying in a statement, "At a time when unity is needed to tackle racism and inequality, we completely disagree with Bernie Ecclestone's comments that have no place in Formula One or society."

Distancing itself from the 89-year-old, who helped oversee F1 for close to 40 years before Liberty Media took over in late 2016, the Formula One stressed, "Mr Ecclestone has played no role in Formula One since he left our organisation in 2017, his title Chairman Emeritus, being honorific, expired in January 2020."

Bernie made the controversial comments while praising Lewis for his initiative to set up a commission in his name to help increase diversity in motorsport. "Lewis is a little bit special. First, he's very, very, very talented as a driver and he seems to be now extremely talented when's he standing up, making speeches," he told CNN.

"This last campaign he's doing for black people is wonderful. He's doing a great job and it's people like that - that's easily recognisable - that people listen to," he continued. Bernie, however, thinks that it will only make little difference to the Formula One, saying, "I don't think it's [the Hamilton Commission] going to do anything bad or good for Formula One. It'll just make people think, which is more important."

Asked what made him think that, the British business magnate argued, "Well things over the years, I've noticed. And there's no need for it. I don't think you're gonna easily change people's attitude. I think they need to start being taught at school. So they grow up not having to think about these things."

He also criticized that Black Lives Matter protests, stating, "I think it's completely stupid taking all these statues down. They should've left them there."