The tweet, which has been now deleted from the femcee's Twitter page, sees the outspoken rapper asking people to love political activist Angela Davis as much as they love the 'Lemonade' singer.

AceShowbiz - Being one of politically engaged female rappers, Noname is no stranger to getting backlash over her opinion. Most recently, the female emcee become the target of Beyonce Knowles' fans, known as Beyhives, for mentioning their favorite in a political-driven tweet on Wednesday, June 24.

The tweet in question saw the rapper asking people to love political activist Angela Davis as much as they love the "Lemonade" singer. Quoting a tweet featuring "color photos of when Angela Davis spoke behind a four-sided bulletproof glass shield at Madison Square Garden, 29 June 1972," Noname wrote, "i wish angela got the love beyonce gets." The tweet has since been deleted. 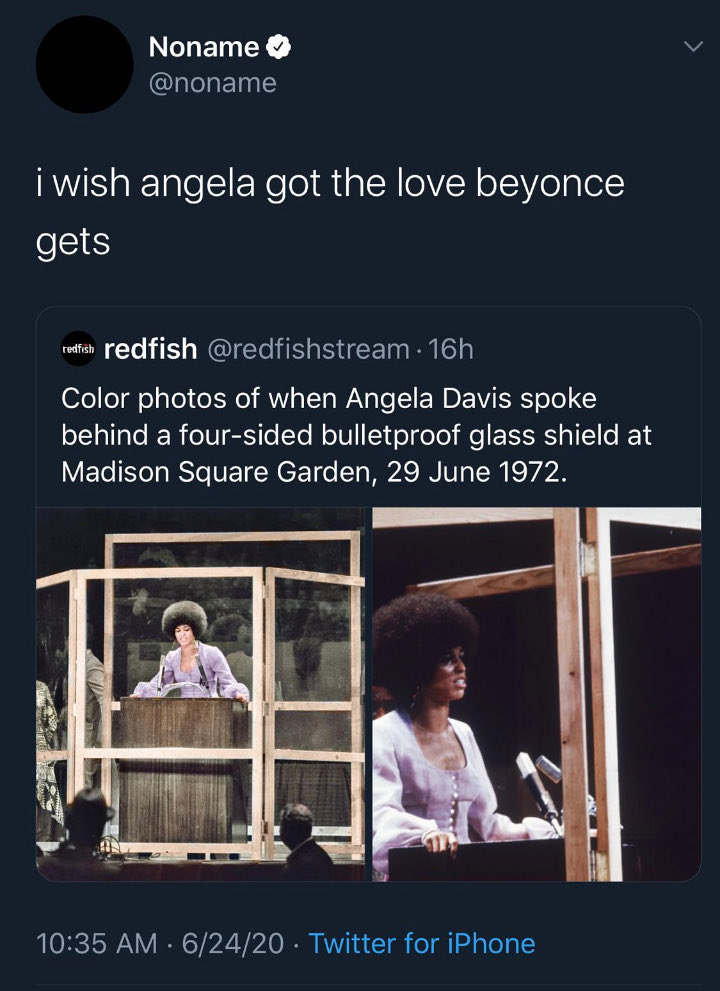 The post apparently rubbed Beyhives the wrong way and prompted them to attack Noname. Bringing Noname's feud with J. Cole into the discussion, a fan wrote, "Cole 'instead of talking down on people who don't have access to the same information you have, maybe try to educate them instead, but you don’t have to be condescending, we're all fighting the same fight' NoName 'y'all love Beyoncé so much but dgaf about Angela Davis LMAOOOOO.' "

Meanwhile, some others came into Noname's defense. "John Boyega being woke and outspoken has made him this ultimate eligible bachelor and dreamboat meanwhile NoName is being attacked and demonized and scrutinised and is under a constant microscope. You have to laugh. By laugh I mean sigh deeply. From a place of deep pain," read a tweet.

Another person thought Noname's tweet was innocent, writing, "I don't think Noname was shading Beyonce. Beyonce is the biggest entertainer of our time so I took it as 'now I wish Angela was as respected as some of our biggest idols'. But yes its a weird comparison. Either way yall really have such short patience with Black women."