The former 'Bachelorette' star offers an update on her relationship with her fiance a week after publicly stating she does not agree with his support for police amid the Black Lives Matter movement.

AceShowbiz - Becca Kufrin's relationship with Garrett Yrigoyen might be hanging in the balance. Just one week after speaking up against her fiance's decision to post "thin blue line" message amid the Black Lives Matter movement, the season 14 star of "The Bachelorette" offered an update on their current relationship status.

When returning to the "Bachelor Happy Hour" podcast on Tuesday, June 16, the 30-year-old candidly said, "I want to say to our listeners out there - because I'm sure many will hear this back and wonder and ask and have opinions - for those who are curious about my relationship with Garrett at this point, all I can say right now is I don't know." She added, "I can't give anything more than that."

Elaborating more on her statement, the reality TV star admitted that they are trying to work out their difference. "It's something that we are trying to work through and discuss and do work on at home at this time and that’s where the work will remain and that's really the best I can give you at this point," she stated.

During the chat, Kufrin also offered an apology to co-host Rachel Lindsay for not expressing deeper sympathy in their previous racism discussion. "I fell short because this conversation truly deserved my complete undivided attention. It deserved much more care and thoughtfulness on my end and you delivered all of that and more and I did not," she acknowledged.

"When we recorded the podcast, it was also 18 hours after Garrett's social media post," she reasoned. "I was dealing with trying to first wrap around my head that and also dealing with discord within my relationship and what it was causing between my family. In that moment, it felt like the reservoir in my brain had reached a maximum and as a human being, I couldn't process everything at once. I don't want this to be an excuse to justify my behavior but rather to give some context."

In the June 9 episode of her and Lindsay's podcast, Kufrin addressed Yrigoyen's controversial post by stating, "Garrett is my fiance and I love him and to his core, I believe that he is a good person. What he posted…I don't align with and I don't agree with." She added, "I do think it was tone-deaf, and it was the wrong time and message and sentiment."

After Kufrin admitted she wished she said more during the discussion in a following Instagram post, Yrigoyen voiced his support in the comment section. "Love you Becca, it's unrealistic to sit down and have individual conversations with millions," he wrote. "It's okay to not get out everything you want to, everything you are doing and saying is okay, because it's how you feel."

"Don't let people take away how you truly feel. Continue moving in a positive direction, growing, and being an awesome human," he went on to advise her. "Those who know you, know you're wonderful. If we can all accept each other and figure out a way to love instead of hate, converge instead of divide, build instead of destruct, we will all be a much stronger unit!" 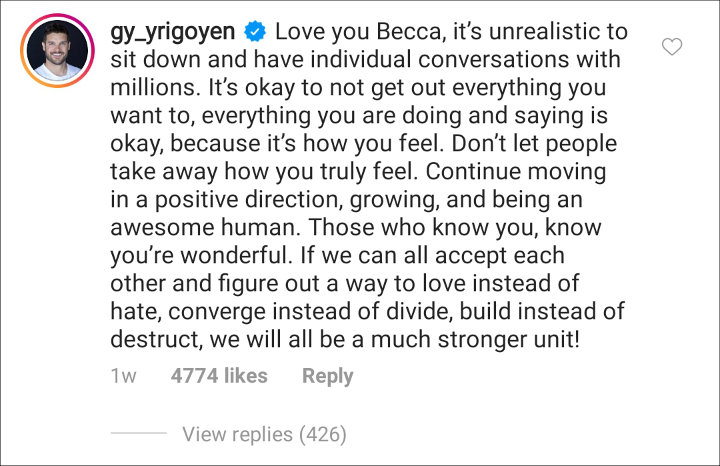 Garrett Yrigoyen responded to Becca Kufrin's post about her podcast discussion over racism.

Yrigoyen sparked controversy with his public support to law enforcement on June 4. Posting a "thin blue line" picture on Instagram, he wrote, "I've listened, learned, helped, supported, and grown. With so many friends and family in law enforcement I couldn't sit back and not support them and the hundreds of thousands of men and women of all races that represent this Thin Blue Line as well."