Beyonce Is Not Involved in 'Black Panther 2' Despite Reports

It was recently reported that the 'Formation' singer was close to signing a $100 million deal with Disney to work on the soundtrack of the 'Black Panther' sequel.

AceShowbiz - Beyonce Knowles isn't going to re-team with Disney in the near future. According to recent reports, the R&B diva had been offered $100 million deal to work various projects on the Mouse House, but that's apparently not true.

Variety's Matt Donnelly has debunked the rumors which started swirling earlier this week. He posted on Twitter, "Despite overwhelming excitement at the prospect, sources tell me there is no big Disney film deal for Beyonce, and she will not contrib to the soundtrack for #BlackPanther2."

Giving hope of Beyonce's possible collaboration with Disney in the future, the senior film writer for the entertainment website added, "As a self-professed proud member of the Disney family, it's likely she'll work w them again at some point." 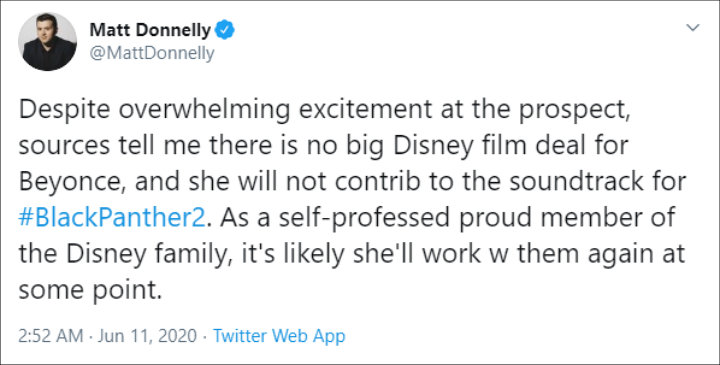 The Sun previously claimed that Beyonce was in talks to sign a $100 million deal with Disney that could see her being involved in three of the studio's major projects. One of the projects was said to be "Black Panther 2", for which the former Destiny's Child member would reportedly be part of the soundtrack.

According to the U.K.'s publication, Disney was "keen to secure her for more projects" after she recently lent her voice to the character of Nala in Disney's live-action "The Lion King (2019)". The deal reportedly would see Beyonce narrating some of the studio's upcoming documentaries.

For the "Lion King" remake, Bey wasn't only part of the voice cast. She also contributed to several songs featured in the movie, including a cover of "Can You Feel the Love Tonight" with Donald Glover, Billy Eichner and Seth Rogen as well as original songs "Spirit" and "Brown Skin Girl". The latter song also featured Guyanese singer SAINt JHN and Nigerian singer Wizkid, with a special cameo by her and Jay-Z's daughter Blue Ivy Carter.

50 Cent Calls Lala Kent Out for Mentioning Their Past Feud