In the latest episode of his 'Unashamed' podcast, the 'Duck Dynasty' star confesses to have recently learned about having a 45-year-old daughter named Phyliss from an affair he had in the '70s.

AceShowbiz - Phil Robertson has had his family embracing his newfound adult daughter. The "Duck Dynasty" star dropped the bomb about his recent discovery related to the extramarital affair he had in the '70s during an episode of his "Unashamed" podcast, and his clan has since rallied behind their new sister, Phyliss.

On Thursday, May 28, the 74-year-old TV personality's third son Willie Robertson shared on Instagram a photo of his 45-year-old half-sister joining their family gathering. "So good finding my long lost sister. Can't wait to share life with y'all's family," the 48-year-old wrote in the caption. "Welcome to the nuttiest family around."

Willie's wife Korie Robertson, in the meantime, let out a picture of her posing with Phyliss and her sisters-in-law on the beach. "We have a new sister! We found out not long ago that Phil has a daughter, and Willie and his brothers have a sister," she dished. "It was as much a surprise to all of us as it probably is to you, but life is full of surprises, and this one is especially sweet!"

"Our annual family beach pics were even crazier, and the Robertson men are now officially outnumbered so we're feeling pretty good right about now, ha! Welcome to the fam, Phyllis; I promise it's never boring," Korie continued. Her daughter Sadie Robertson later reposted her post, and added a note that read, "the bigger the better."

Willie's brother Jase Robertson have also publicly welcomed Phyliss into their family. Along with a photo of him with his half-sister, the 50-year-old gushed, "Yep, I have a sister. And she's awesome." His wife, Missy Robertson, offered more details as she recalled the moment Jase broke the news to her months earlier.

" 'DNA results are back, and...I have a sister.' Words I will never forget my husband say as he stepped back in beside me at a worship conference just 3 short months ago," Missy wrote in her own post. "The next few moments were emotional as we continued to praise and worship an amazing Father and Savior." She added, "Welcome Phyllis and Tony, Grant and Julie, Joel and Kendall! You are loved." 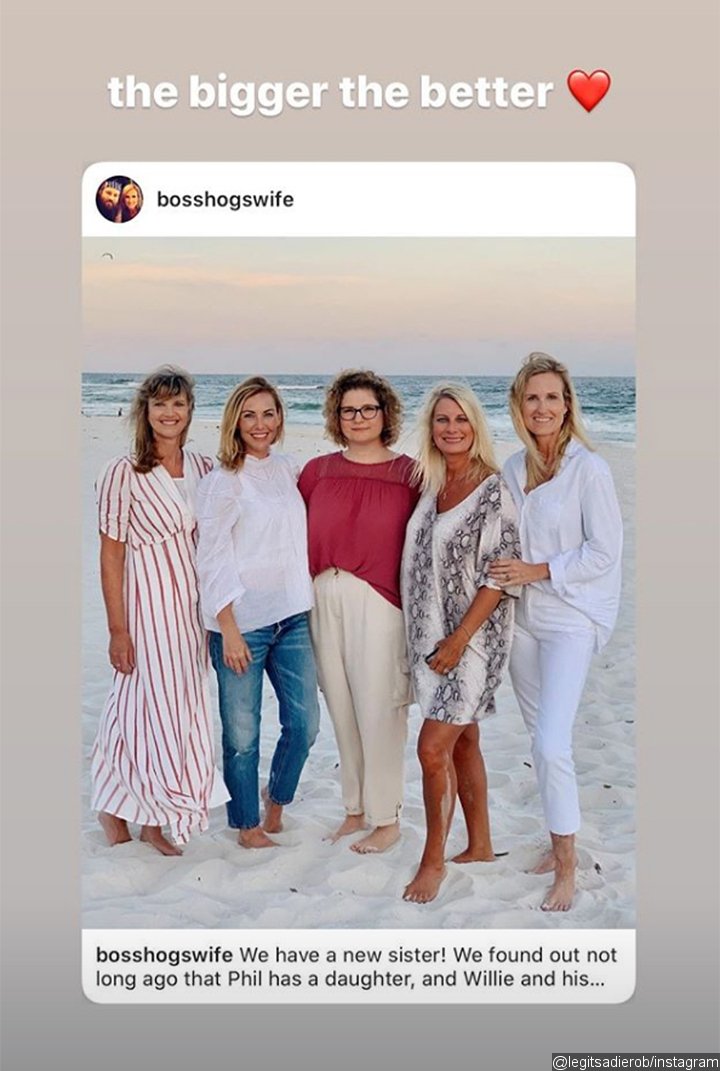 Phil himself shared his thought on finding Phyliss after 45 years during a podcast discussion with his sons, Willie, Jase, Al and Jep Robertson aired on Thursday. "It's a pretty cool explanation of redemption, reconciliation, love," the self-professed devout Christian said.

"As it turns out, 45 years, you have a daughter that you don't know about, and she has a father she doesn't know about. 45 years that doesn't sound like very long but you say, that's a while," the husband of Marsha Kay continued. "So finally, after all those years, we come together."

In the podcast's episode, Al Robertson confessed to be the first in the family to learn about Phyliss. Claiming to have received a letter from her, he spilled, "Basically, it was from a woman who said that by a DNA search, she thinks that dad might be her dad." He went on to admit that he and his brother Jase "dismissed" her claims in the beginning.

Still, when they began "looking at it a little more deeply," Al could not help but admit "there might be something to this." He continued, "We had to pursue it. I started thinking, there's a 45-year-old woman out there who doesn't know who her dad is, and she's looking. And I thought, even if it's not dad, she needs to know it's not dad."