The creator/host of the long-running modeling competition finds herself under fire after a clip from a past episode in which she confronted Dani Evans about the gap in her teeth came out online again.

AceShowbiz - Tyra Banks has acknowledged she was in the wrong. Finding herself under fire for her past treatment to aspiring models after a series of clips from old "America's Next Top Model" cycles resurfaced online, the former Victoria's Secret Angel came forward with a statement in which she accepted her erroneous ways.

"Been seeing the posts about the insensitivity of some past ANTM moments and I agree with you," the 46-year-old TV personality said in a tweet she posted on Friday, May 8. "Looking back, those were some really off choices." Though she did not offer an apology, she added, "Appreciate your honest feedback and am sending so much love and virtual hugs."

One of the viral clips many had issued with captured a moment between Tyra and Cycle 6 winner Dani Evans. In it, the former host of "America's Got Talent" confronted the then-wannabe model about the gap in her teeth. "So, Danielle, you went to the dentist but you refused to have your gap closed," she said in the footage. "Do you really think you can have a CoverGirl contract with a gap in your mouth?"

Dani lively replied, "Yes, why not?" In response, Tyra put her finger up to her front teeth to mimic having a gap while telling her, "This is all people see. It's easy, breezy, beautiful CoverGirl. It's not marketable." The creator's statement got Dani relenting as she told the judging panel, "A little bit is ok but I don't want to completely close it."

The cringeworthy moment quickly gained attention in the negative way. Model Slick Woods reposted the clip on her Instagram with a caption that read, "No one should ever talk to you like that @danievans1, that episode fucked up little simone/slick so that’s how y'all feel @tyrabanks @miss_jalexander???"

Nightly Pop's Nina Parker has also weighed in on the issue through a Twitter post. "I remember watching this as a young woman & I felt extremely discouraged to be on TV bc of this scene," she wrote. "I was disappointed in Tyra then... She ended up pressuring this girl to get dental surgery to be 'marketable.' Also my gap & TV contract say HI!" 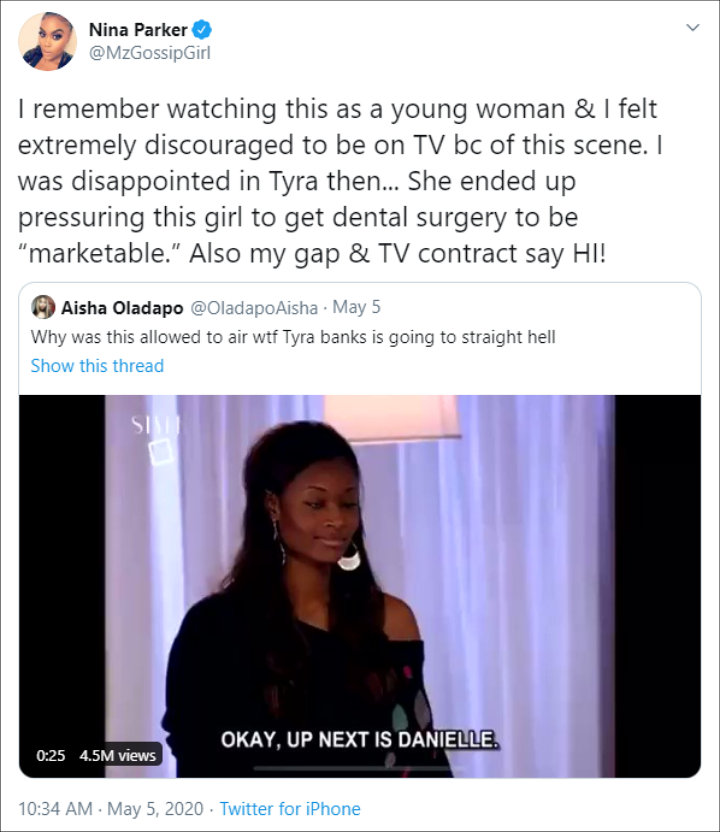 Dani herself has a few days earlier addressed the controversy in a video she posted on Instagram. "This is a video for me to speak my truth and to provide clarity and for me to address an issue that was done 15 years ago, that carries weight and clearly affected a lot of young girls in America after watching it," she began explaining.

"I want to address all of those young girls. I'm gonna take this time to build up and to speak to all of my young queens who saw that episode and were truly affected by Tyra's words," the 34-year-old continued. She then told those watching her video, "I want to speak to you right now. You're beautiful. And I'm not talking about a physical feature."

"It doesn't matter if you have a gap, stacked teeth, straight teeth, it matters not. It doesn't matter if you're black, brown, white, indifferent, other. What makes you beautiful is in here," she went on delivering her positive message. "I'm speaking to all the little girls. If I could love on all of you right now, I would. I want to remind you of your worth. You're a masterpiece, you're so loved, you're adored and you're beautiful."