Counting down to the release of 'Stuck With U' music video, the 'Yummy' hitmaker puts out on social media a clip of the 'Tiger King' star slow-dancing with her husband Howard.

AceShowbiz - Ariana Grande has been left shocked by Justin Bieber's teaser for an upcoming music video of "Stuck With U". On Thursday, May 7, the "Yummy" hitmaker offered a sneak peek at a surprise cameo by "Tiger King: Murder, Mayhem and Madness" star Carole Baskin and her husband Howard, prompting his duet collaborator to quickly set the record straight.

Denying to have any part to do with the 13-second clip, Grande responded to Bieber's post by stressing in a Twitter post, "for the record, i did not allow or approve this clip to be in the actual video." She, nevertheless, admitted, "but. nonetheless. it exists and that's ..... unique," before hyping up the music video release, "anyway, 7.5 hours !"

When a fan responded to her clarification with laughter, the 26-year-old songstress could not help being sarcastic. "i am very glad someone is laughing [loudly crying face emoji] the f**king heart attacks i had over this," she replied. 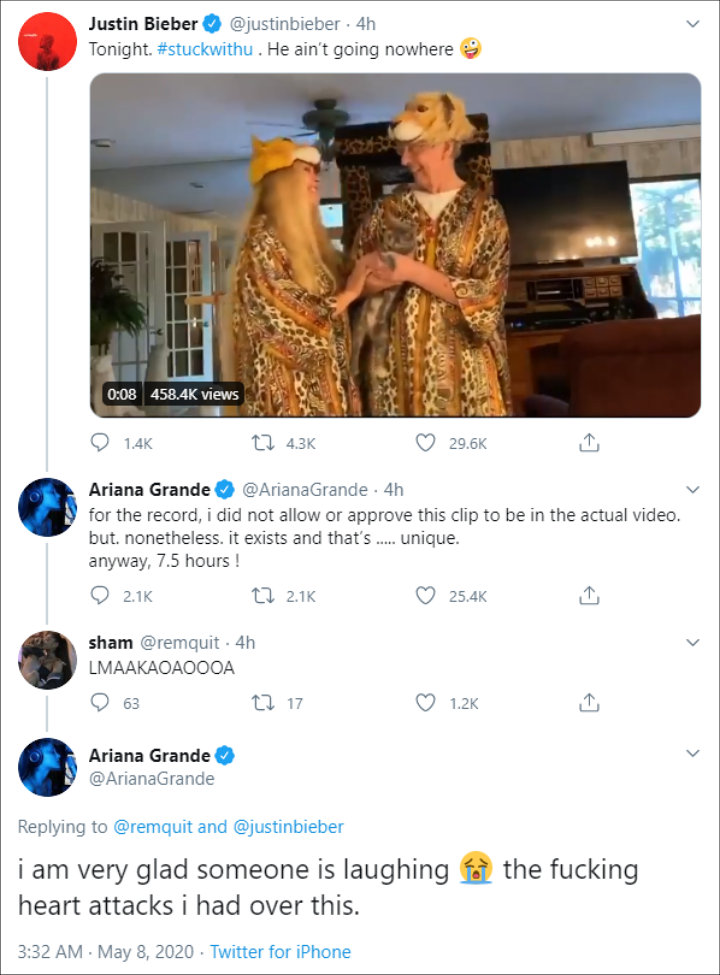 The clip at issue saw Baskin slow-dancing with her husband and their cat, Pearlie, to the instrumental of Grande and Bieber's charity single. The couple donned matching animal-print onesies and lion hats for the clip, which TMZ claimed won't be included in the final cut.

About her submitted clip, Carole explained to the outlet that Bieber's friends reached out to her and asked her to do one. The big cat-rights activist went on to express her hopes that "it doesn't attract too many of the haters who have been bashing us since being misled by 'Tiger King'."

Grande and Bieber have joined forces to record "Stuck With U" in an effort to provide support fort the children of first responders, who have been affected by the coronavirus pandemic. The money they raised from the song will benefit the First Responders Children's Foundation and SB Projects, an organization founded by their manager Scooter Braun.

Hours before she responded to Carole clip, Grande had taken to Instagram to share her excitement over her duet with Bieber. "i can't fully articulate ……… howwwww happy i am that we waited this long to do this (the duet thing). this moment really means so much more than it ever could have if it had happened any other way or if it had been any other song," she wrote.

"being able to lend our voices to this project and collaborating on this has been so fulfilling and i really just love this song so much," she continued. "grateful to be doing this with my friend and also just wanted to express an enormous thank u to all of the brilliant creatives who worked on this song." She added, "my heart is seriously so full. we're so close and i cant wait for u all to hear #stuckwithu in a few hours !"

Ariana Grande Gets Bicycle for Two as Wedding Gift From PETA