Aaron expresses his feelings on the song, which title is a reflection of the score of their dunk match, as he is pissed at the Miami Heat player after he lost to him at the 2020 Slam Dunk Contest.

AceShowbiz - Dwyane Wade has broken his silence on Aaron Gordon's diss track aimed at him. The Orlando Magic star released the track, which is titled "9 out of 10", on Sunday night, April 26, much to everyone's surprise.

Aaron expressed his feelings on the song, which title was a reflection of the score of their dunk match, as he was pissed at the Miami Heat player after he lost to him at the 2020 Slam Dunk Contest back in February. In the song, Aaron could be heard rapping, "Saw you in the hallway you said, 'Youngin' put on a show'/ Didn't know that's the code for you're about to get rolled." He also claimed that NBA commissioner Adam Silver told him that he "deserved the gold."

The diss track obviously didn't go unnoticed by Dwyane, who quickly responded to it on his Twitter account. Instead of giving a fiery response, Dwyane gave his rival a "free advice," writing, "He should trademark 9/10. Make some money off of it. That's free advice that I won't charge him for it. (You know since I costed him a Mill) That @DWadeCellars looked." 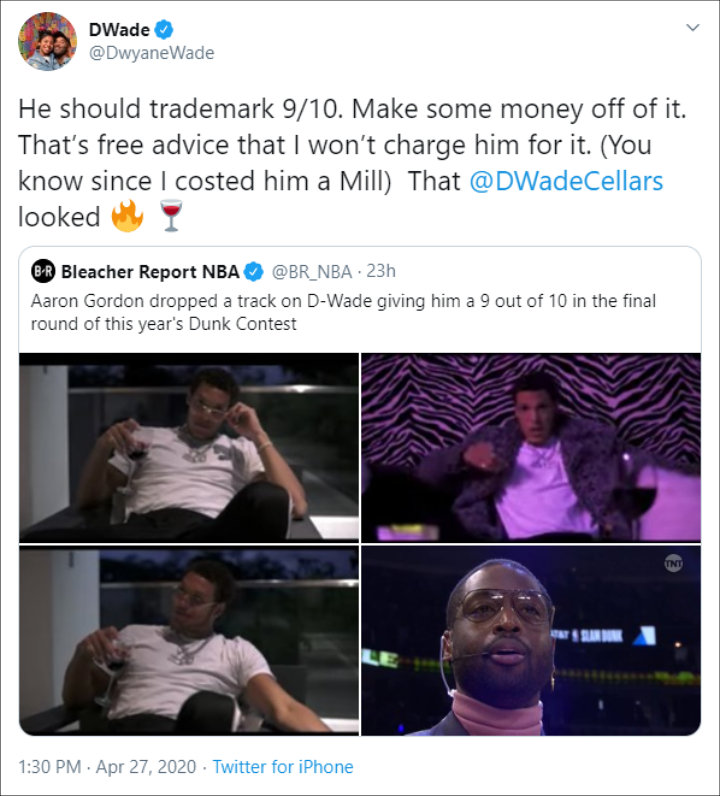 Most basketball fans were defending D-Wade following the petty diss track. "If AG could focus on shooting 9/10 from the field then maybe the Magic would make the playoffs more than once in his 6 year career," one user wrote. Echoing the sentiment, another fan said, "He should be worried about his team and not a silly dunk contest. guy is a clown."

"So Gordon's crying 'cause he lost a dunk contest and he blames D-Wade. Honestly, there's more important things than a dunk contest, he just has the nerve to be blown up all year by miami," someone noted.

Some other, however, could understand why Aaron was being petty over the defeat. "A million lost? I'm bringing it up every time someone talks to me abt it if I'm AG. You owe that man some money," one person tweeted. Another user chimed in, "I mean the mans not lying when he says you robbed him lmao, idk why people are taking it out of proportion though it's not like he said anything truly bad, you did rob him though that's a fact."