The 'Melrose Place' alum claims that '#BelieveWomen does not mean everyone gets to accuse anyone of anything' after she's labeled a 'hypocrite' for endorsing the presidential hopeful despite past allegation against him.

AceShowbiz - Alyssa Milano has taken to Twitter after she's getting dragged on the Internet for supporting presidential hopeful Joe Biden despite past sexual allegation against him. The 47-year-old actress, who has been one of Hollywood figures championing the #MeToo and Time's Up movements, is slammed for staying silent in the wake of the resurfaced allegation against the former vice president by former Senate staffer Tara Reade, who claims he sexually assaulted her in 1993.

After mounting critics against her, the "Melrose Place" alum tweeted on Monday, April 6, "#BelieveWomen does not mean everyone gets to accuse anyone of anything and that's that. It means that our societal mindset and default reaction shouldn't be that women are lying."

She explained her stance in defending women's rights, "I believe, along with many others in this space, that accusations need to be investigated with due process for the accused. This is the only way for the movement to work & create the change we are fighting for. Anything less puts the entire movement and women's equality at risk."

"This will be my last statement on this issue," she stressed on the matter, before leaving a message to her followers, "Please be well and take care of each other. Hold each other tight." 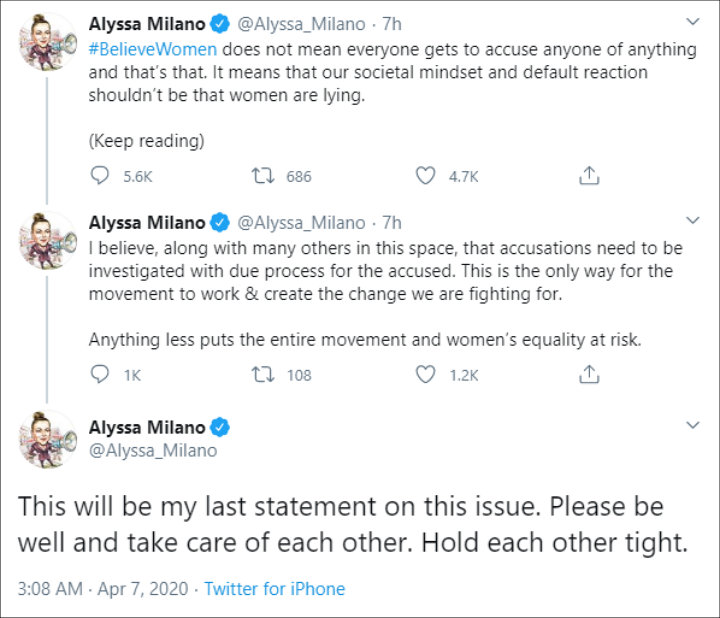 Prior to this, Milano was branded a "hypocrite" for supporting Biden. "So, I've been very vocal about Biden and my support for him. I've known him for a long time," she said in an interview with Andy Cohen on his SiriusXM broadcast . "And I did do my due diligence because part of it was that - and the article that sort of stood out to me was that Time's Up decided not to take the case. "

"I did my work and I spoke to Time's Up and I just don't feel comfortable throwing away a decent man that I've known for 15 years in this time of complete chaos, without there being a thorough investigation and I'm sure that the mainstream media would be jumping all over this as well," she went on defending her support for Biden.

Milano later shared a link to the interview on her Twitter page and doubled down on her statement. "I explained my silence on the allegations against Joe Biden in this clip. I am still endorsing @JoeBiden. Listen to this clip to find out why," she wrote, along with the hashtags #MeToo and #TimesUp. 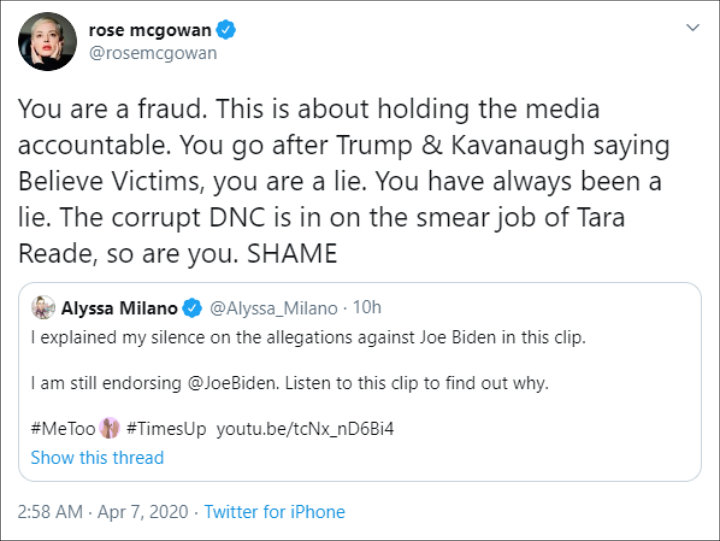 But Rose McGowan, who had a big part in bringing down serial sex offender Harvey Weinstein, didn't buy Milano's explanation. "You are a fraud," she tweeted in response to her former "Charm" co-star's post. "This is about holding the media accountable. You go after Trump & Kavanaugh saying Believe Victims, you are a lie. You have always been a lie. The corrupt DNC is in on the smear job of Tara Reade, so are you. SHAME."

Alyssa Milano Would Love to Run for Congress